It's More Than Just The Hat

Yet another FX hit, Timothy Olyphant in Justified. 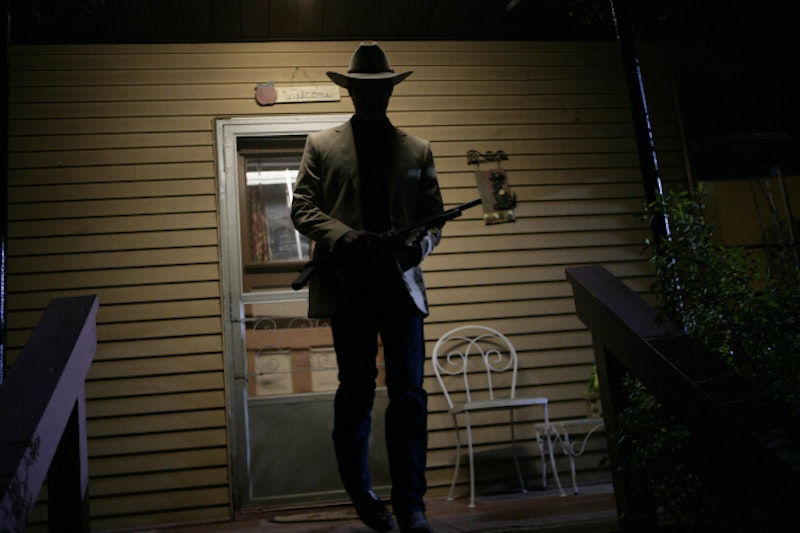 FX is quickly giving AMC a run as the go-to outlet for well-done basic cable programming. Having made its bones with the hog-ridin’ hijinks of Sons of Anarchy and the wildly uneven comedy It’s Always Sunny in Philadelphia, FX has been on a tear of late, with the Adult Network-inspired cartoon spy spoof Archer, the boxing drama Lights Out, and the sui generis deconstruction of what a sitcom can be in its crowning achievement to date, Louie.

(It’s also not above making head-slapping errors like cancelling Terriers, an extremely promising private detective series with the always-worthwhile Donal Logue, which was strangled in its crib after one season. More room for Two and a Half Men reruns!)

With its somewhat scattershot approach to programming—its schedule still dotted by the likes of Sheen and company, That ‘70s Show, and movies like Armageddon and (really?) Meet Dave—FX is obviously still trying to define itself. Nowhere is this more evident than with Justified, the southern-fried law-enforcement series based on a couple of novels and stories by Elmore Leonard.

Now in its second season, Justified centers on Raylan Givens (Timothy Olyphant, Seth Bullock on HBO’s Deadwood and star of countless big-screen disappointments like Hitman and A Perfect Getaway). A U.S. marshal who’s transferred from Miami back to his old stomping grounds in eastern Kentucky after his controversial killing of a drug kingpin, Givens has to deal with family, friends and ex-lovers, as well as running down the usual (and sometimes unusual) bad guys.

The show’s well-acted to a fault: Not just by Olyphant, in a sly performance as the show’s conflicted (and possibly trigger-happy) character, but also by Nick Searcy as Givens’ boss, Walton Goggins as on-again/off-again criminal-minded friend Boyd Crowder, and, this season, veteran character actress Margo Martindale as the seemingly lovable, but lethal, marijuana major domo, Mags.

The storylines are generally well done, and the dialogue usually snaps without coming off as overly quippy, as you’d expect from Leonard (who’s onboard as exec producer). Still, there are some glaring inconsistencies in the show that are doubly frustrating when weighed against its considerable pluses.

Chief among these is Boyd Crowder. A childhood friend of Givens’, Boyd was introduced in the first season’s pilot episode as an apparently racist nutjob who employed a rocket launcher against an African-American church. As the season progressed, he was briefly imprisoned; was released as a born-again evangelist whose quickly-built army was soon turned against his father Bo’s meth-producing operations (either because he was jealous, or because such activity was profane in the eyes of the Lord; it was never made precisely clear); helped Givens take down Bo in a hail of gunfire; and this season is cozying up to his former sister-in-law, Ava—who shot Boyd’s brother dead last year.

Goggins, who played Shane Vendrell on The Shield, has navigated these twists and turns with aplomb; it’s only when the show’s over that you start considering just how illogical the character is. Pairing him off with the unappealing Ava Crowder (unappealingly played by Joelle Carter), who was essentially Givens’ love interest last season, has potential, I suppose, but only if Boyd takes the lead.

Mags and her brood (including the ever-twitchy Jeremy Davies, last seen on Lost) are this season’s main baddies. So far, so good; Martindale’s so homey that her ability to unflinchingly feed an unsuspecting opponent some poisoned cider at his own kitchen table is doubly chilling, even if the fact that her family’s so well-known to makes one wonder why we never heard of them last year.

Also welcome is the expanded space given to Natalie Zea as Givens’ ex-wife, Winona. Working at the courthouse, she unavoidably runs into Givens regularly (recalling a similar set-up on Terriers). She’s also on the outs with her second husband, a realtor who got in way too deep with some loan sharks last year. Zea, who dripped all three terms on Dirty Sexy Money, has been considerably toned down here, but is well up to the challenge of a woman torn by her emotions.

And then there’s Givens’ cowboy hat, a regular target of derision for other characters (and the centerpiece of a memorable barroom brawl last year). Leonard doesn’t think the hat should stay, but it does help give Olyphant some authority, recalls Deadwood, and doesn’t look nearly as ridiculous as it probably would on someone else. I say the hat stays—and, with luck, so does Justified.