The winners, the losers and oh, who gives a fuck? 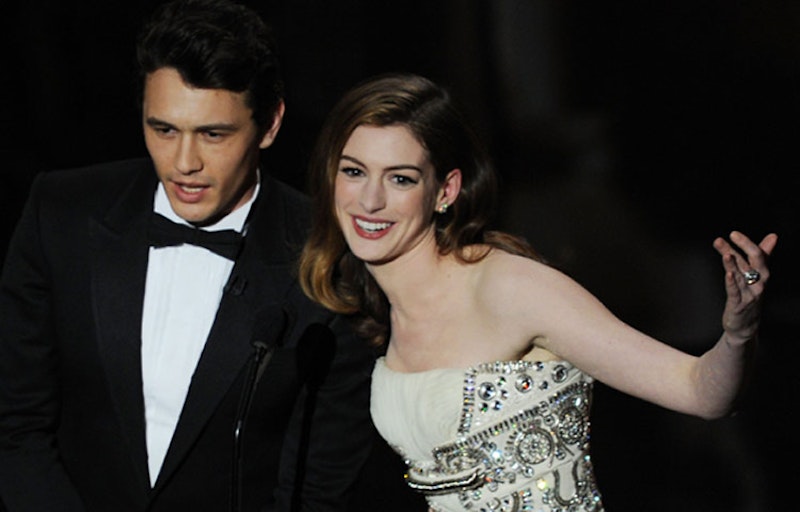 Bashing the Academy Awards has long since become as common an occurrence as the actual ceremony itself. It’s too long! They didn’t include Actor/Actress X in the dead persons’ montage! Why did she wear that?

So it is with last night’s hoo-hah, which didn’t exactly set society ablaze with controversy. Just as five of the six major categories were pretty much givens for the past several weeks (I admit, I thought they’d give David Fincher the director award), the telecast itself was, if relatively well-paced, a pretty snoozy affair. Not necessarily James Franco snoozy, but still.

Gotta start with the hosts. I confess that I still don’t quite get the adulation that Franco’s been garnering for the past year, though adding Oscar host to his going-to-NYU/showing up on General Hospital/making experimental films/appearing in drag meta-whatsit routine undoubtedly sounded like a good idea at the time. Still rocking the James Dean/Paul Newman look, Franco spent most of the night with his head cocked at an odd angle, affecting to either be bored with it all or well-medicated on a ganja/Quaalude cocktail of some sort. He did manage to get one of the night’s few genuine laughs with a swipe at my personal hero, Charlie Sheen, but otherwise seemed like a waste of space.

Anne Hathaway enthusiastically—maniacally—played yang to Franco’s yin, belting out a tune about being left hanging by Hugh Jackman, chortling heartily at anything even mildly amusing, yelling “Woo!” for practically every presenter. Still, she seemed to be having fun—in an “I’ve just had my 10th Red Bull/triple latte!” kind of way—which was more than could be said for most of the crowd.

Maybe it was the faits accompli of The King’s Speech, Natalie Portman, Christian Bale and Melissa Leo that cast such a businesslike pall over the evening. Only Leo’s studiedly “spontaneous” F-bomb during her acceptance speech (and, really, Melissa: You’d already won some five awards for The Fighter already; let’s keep the “I’m-all-agog!” business to a minimum) served to energize the early going, and even it paled next to presenter Kirk Douglas’ playful, if wince-inducing, flirtation with Hathaway a few minutes before.

Then there was the show’s tacit acknowledgment that they don’t make Oscar hosts like they used to, via a hologram of Bob Hope at the first televised awards (complete with a poorly dubbed impersonator “introducing” presenters Robert Downey Jr. and Jude Law, who wisely failed to react to it at all) and the appearance of the never-more-smug Billy Crystal, who basked in the applause before introducing somebody or other (I admit to becoming a bit glazed myself by that point).

The musical portion of the evening has provided some of the ceremony’s more legendary train wreck moments, as anyone who suffered through Debbie Allen’s choreography for most of the 1980s will attest. This year the broadcast quizzically split the four “Best Song” nominees into two segments, with Randy Newman and Mandy Moore/Zachary Levi’s vocals lost in the unbalanced mix. No such luck when A.R. Rahman and Florence Welch presented their dirge from 127 Hours, or when Gwyneth Paltrow caterwauled through her would-be country hit from her would-be Oscar contender Country Strong. Is there anything Gwynnie can do?

Beyond that, there were some memorable speeches (including one by the screenwriter of The King’s Speech, acknowledging his own triumph over the stammering affliction, and a pleasantly goofy one from the guy who won for live-action short film), the usual who’d-they-leave-out-of-the-dead-persons-montage game—no Corey Haim (so what?), but no Maria Schneider?—Colin Firth looking dashing, and the night’s biggest laugh … which came not from Franco, Hathaway or Crystal, but from Cate Blanchett, somehow stuck with the Makeup Award, who muttered “That was gross” after a particularly graphic clip from The Wolfman was shown. (And yes, now The Wolfman can be referred to as an Oscar-winning film, while The Kids Are All Right cannot.)

Hathaway’s insistence early on that this year’s edition would appeal to “a younger demographic” went, not surprisingly (again), mostly unfulfilled. You need look no further for proof than the coronation of The King’s Speech—a well-made, competently directed, and surprisingly moving film that could just as easily have been produced (give or take a few “fucks”) in the 1950s.

Where does Oscar go from here? Perhaps they’ll have Taylor Lautner and Lea Michele host next year’s gig. Or, to be truly edgy, give the whole shebang over to Kirk Douglas. The kid’s got pep.