Wherein our daring TV critic rewatches old primetime flops and asks the all-too-often unasked question, Why was this canceled? 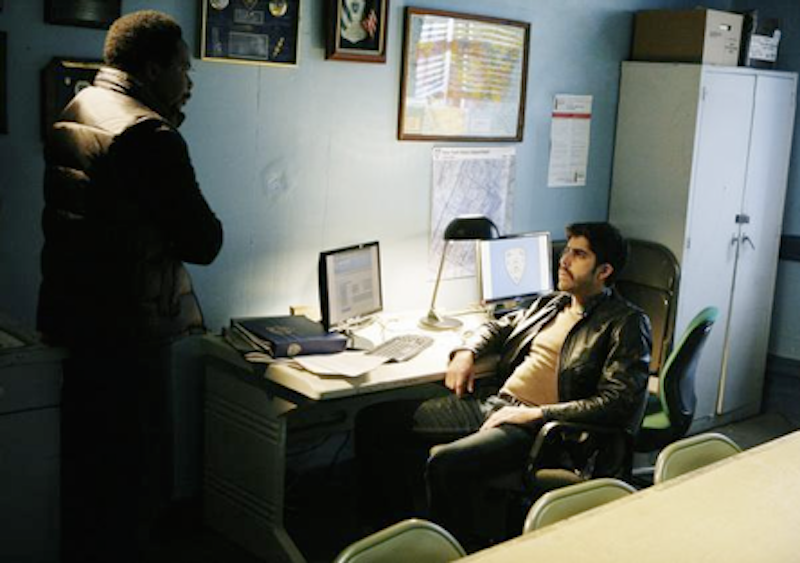 It’s an unfortunate coincidence when an episode titled “Boorland Day” ends up being such a snooze. There were plenty of elements that typically make for decent cop drama—a crime spree by a noted criminal family, a father making the ultimate sacrifice to give his teenage son another shot at a decent life, cops trying desperately to hide their shady pasts—but wackiness is supposed to be the show’s selling point and this episode just left me thinking, “I’m sure Law & Order has done this before, and probably better.”

“Boorland Day” focuses on one of New York City’s oldest non-mob crime families, led by Mike Boorland. The episode begins with three separate cases: Walsh and Shraeger are caught in a foot chase with a bank robber, Team Facial Hair arrests a guy who used a samurai sword to rob a cash-only restaurant and Beaumont and Jesus Cop investigate a pawn shop robbery. It turns out that the bank and restaurant robbers are both members of the Boorland family and when the squad realizes that an onion left behind at the scene of the pawn shop robbery is not simply an onion, but a calling card that makes me weep for the day’s Home Alone’s Wet Bandits, the game changes. These aren’t three separate incidents. As the Sergeant puts it, “Ladies and Gentlemen, drop everything. We have ourselves a crime spree.”

It’s on and the whole squad sets off to track down the rest of the Boorlands, except for Team Facial Hair who has to stay behind to catch up on paperwork. This alone time nearly leads to the downfall of the show’s most promising duo when reckless Delahoy nearly kills the thanatophobic Banks, while trying to break up a domestic dispute. Banks tells the Sergeant that he wants a new partner or he’ll quit and Team Facial Hair nearly breaks up; but don’t worry, the episode ends with Delahoy and Banks talking it out and sharing a few I love you’s.

Meanwhile, Walsh and Shraeger discover the true motive behind the Boorlands’ crime spree: Mike Boorland has end stage renal failure and his family is trying to get enough money to pay for a kidney transplant. When the squad learns that four more Boorland family members are holding people hostage at a jewelry store, Walsh and Shraeger hightail it to the hospital to work out a deal with the sick Papa Boorland and put an end to the madness. They offer him the opportunity to save his 16-year-old son (the one who robbed the bank) by taking the rap for the Boorland family crimes. Mike agrees and, as part of the deal, puts a call in to the hostage holders and tells his family to stand down. This round goes to the good guys.

This was a pretty straightforward, predictable episode, but there were a few important incidents and revelations. First, a shady dude from Jesus Cop’s bad boy past shows up and seems intent on stirring up some trouble. Also, Shraeger tells Walsh about her private mission to uncover the squad’s secrets and, because he feels like he can trust her as a result of this honesty, he tells her all about why he became a cop: As a minor league ballplayer, Walsh intentionally threw a few games. When he made it to the show, he stopped gambling, but not without upsetting the wrong people. He was threatened and his girlfriend was murdered in what was made to look like a “mugging gone wrong.” So Walsh’s reason for becoming a cop is the same as that of every other TV cop in existence: karmic restitution. How come when asked why they wanted to be a cop, no one ever says, “Because I’m an abusive, power-hungry asshole”? It’s always to settle some karmic score.

The other big revelation is that Walsh and Beaumont (the cop who thinks she has nice boobs) are actually dating and it doesn’t seem like anyone on the squad knows about their relationship. I’ll be looking forward to that information coming out in future episodes and can only hope that a relationship means Shirtless Renner will be popping up any day now.

Check out the previous edition of Gone Too Soon here.