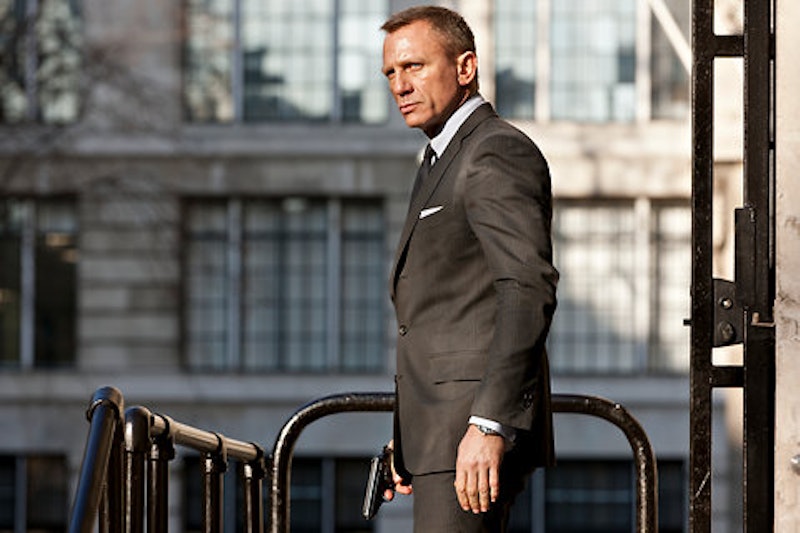 You may have heard that the new 007 flick is haunted by the ghosts of the 22 James Bond movies that came before. And while that’s certainly true, it’s among the less interesting aspects of Skyfall. I occurred to me that instead of calling out homages and/or churning out the zillionth “Bond at 50” think piece, a sub-heded/list approach where I’d talk about the stuff Bond fans actually look for from Bond movies might be more useful to those of you still on the fence as to whether or not to see this thing.

Not quite as satisfying. You can totally make the separation if you’ve watched at least five-10 action movies in recent years.

Well, it’s not like you came for the dialogue. Did you?

This shit was wack, but then again, all Bond title sequences are wack unless you’re a 13-year-old boy.

Oh, plenty. The kick-ass opening involves wicked car and motorcycle chases that result in lots of vegetable stand vendors’ days getting ruined, and there is some mano-a-mano atop a moving train. Later, somebody throws a subway train at Bond, sort of. It’s all pretty cool.

We can probably all agree that Die Another Day, despite its kick-ass 30-minute intro, more or less represented the height of full-bore 007 incredulity. A couple of years later, Casino Royale moved the goal posts of plausibility so far back that even the series’ first principles seemed laughable. Without spoiling Skyfall for anyone, it’s possible to buy this movie’s premise and execution if one can accept and embrace a former MI-6 agent’s depthless, all-encompassing thirst for revenge to the extent that the logistics of the whole enterprise aren’t called into question. Now, if you’re calling these logistics into question—note that everything that happens could actually happen—you’re over-thinking a James Bond movie.

Really, just, um, Shanghai. Nothing else really matters. There’s a part where Bond fights an assassin in a skyscraper in Shanghai in a warren of glass-walled offices while luminescent natural shapes (a humongous jellyfish) are projected in the background that’s so lovely in its way that in the right mood, it could make you cry. Then there’s a casino scene shortly thereafter that’s equally intense for different reasons. For me, this was kind of the beating, procedural heart of Skyfall, where no missteps occurred and I was totally keyed into everything that was going down.

There are four kinds of Bond girls: victims, avenging victims, agents, and henchwomen. Goldfinger’s Pussy Galore and A View To A Kill’s Mayday would be prime examples of henchwomen, Tomorrow Never Dies’ Michelle Yeoh rocked the undercover agent mojo, and Quantum of Solace’s Camille Montes would rate as an avenging victim. (Mayram d’Abo—also, interestingly, the aunt of Olivia d’Abo of The Wonder Years and Law & Order: Criminal Intent fame—played a victimized cellist with a cute overbite in The Living Daylights.) These movies are often best when they throw a binder full of babes at Bond and the viewer.

Skyfall serves Berenice Lim Marlohe up as a sultry, doomed sex-trade victim drifting into middle age, and Naomie Harris as an unproven MI-6 who bears at least a passing resemblance to Scary Spice. Neither is saddled with an infantile, sexual name and though both are marked improvements over the three previous movies’ Bond girls, I wish they’d have thrown in one or two more, you know?

Bah, times is hard: a hand cannon only Bond can fire, and a radio transmitter. The U.K.’s austerity measures are trickling upward, it appears.

Javier Bardem as an effete ex-M-I6 agent out for vengeance and Skyfall’s sole acquiescence to the Bond series’ long and of late neglected dependence on camp. The blond mop: laughable. The face, after the removal of bridgework: grotesque. And, sure, the guy commandeered a ruin of an island off of mainland China, convincingly menaced Dame Judi Dench with cold steel, and had crazy eyes, but these movies seriously needs to get back into the world of bad guys who are, like, hugely and monstrously scary in a “the world needs to get clear” kind of way.

They were there, but they also kind of weren’t, if you get me. I don’t think any of the thugs even got a name. Like, the part where Bardem sends a troop of dudes out to the Scottish countryside to ice Craig and Dench? They could have swapped out those eight dudes four or five times while filming and nobody watching would have noticed the difference. Which I kind of hate, because making second bananas integral to the plot even on a small scale can have the effect of drawing the audience into the movie’s world in a way that Bond writers/producers/directors haven’t much cared about for a minute. And I mean something more significant than naming a dreadlocked henchmen “Mr. Kill” then slicing him up with lasers when he tries to ice Halle Berry.

Uh-uh. Maybe next time around, homie.

None of note, but maybe this is gonna be like License to Kill, where 10 years after the fact you catch it on cable and the 2022 versions of whatever it meant to be Carey Lowell or Benicio Del Toro way back in 1999 have you bugging out over who actually wound up with a network contract or Hollywood superstardom.

Look, I respect Adele, the way you have to respect earthquakes, hurricanes, towering infernos, and other forces of nature, but respecting something isn’t necessarily the same as loving it. The woman has a pile driver of a voice; when she’s wielding it with all her might, I can only cope for two-three minutes, then I’m out: out of the room, out of the car, whatever, it’s just a personal threshold deal for me. “Skyfall,” Adele’s Bond theme, is more or less pro forma, not even remotely revolutionary or totemic, as Bond themes go—rest easy, “Diamonds Are Forever”—yet it’s restrained enough that I can listen to it over and over without wanting to take a hammer to my iPhone or to myself to halt the bleating. So: win.