The Bay: A Toxic Mix of Frankenfish and Government 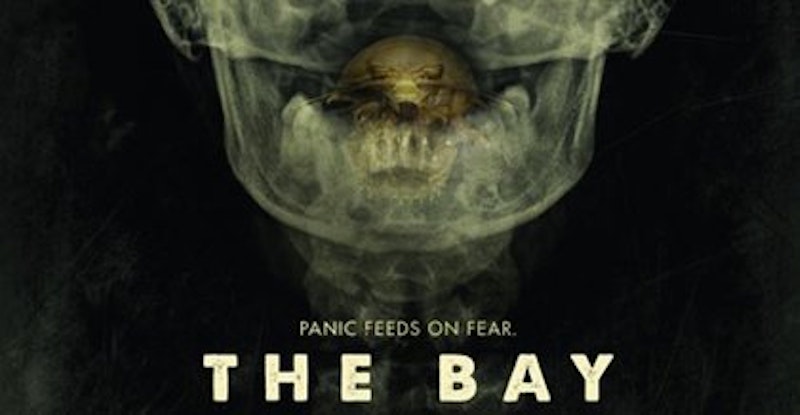 When I read a few weeks ago in The New York Times that a new eco-thriller by Baltimore native director Barry Levinson was coming out (limited theatrical release), they had me at the plot: a small waterfront Maryland town gets wiped out by a flesh-eating zombie Frankenfish that crawls out of the polluted Chesapeake Bay.

And what’s this? It’s an indie film, so it isn’t playing anywhere near the small Chesapeake Bay waterfront Eastern Shore Maryland town where I live? Why yes, I will drive over said Frankenfish-filled bay’s bridge into DC to the chic indie West End Cinema to see it (it’s also playing at two Maryland locations: the Charles Theater in Baltimore and the AFI Silver Theatre Culture Center in Silver Spring). Interestingly, I could have paid a mere $3.99 to see the film on iTunes or Amazon Instant Video (you should do this; the film is fantastic) the day it came out last weekend. But I like seeing movies on the big screen, and the West End Cinema serves Jack Daniels and root beer marshmallows. Word.

The movie is actually not shot on film, but rather is a collection of “found footage” (see also: Blair Witch Project and Paranormal Activity, whose producer also brings us The Bay). Therefore, it’s not real. It’s shot to be a documentary, but it’s really a mockumentary, only not funny in any way at all. The sources of the pieced together footage are a reporter’s Skype interview and cameraman’s tapes, security cameras in buildings and police cars, footage from oceanographer’s video journals, online video chats, Facetime messages from a teenager, and more. A total of 20 different types of cameras were used to make the film.

At first, I was annoyed when I heard The Bay was made in South Carolina and not Maryland. Why wouldn’t Levinson make a movie in St. Michaels or another real town to support the film industry in his home state? Only later did I realize none of our real towns would really want to be the town with the fish zombie apocalypse where pretty much everyone dies a gory, horrific death. Well played, Levinson.

Spolier alert: The story goes that one July 4th, in the small quaint waterside town of Claridge, Maryland, two million fish die and thousands of blackbirds die and then, oops, the town’s water supply and Chesapeake Bay are poison now and a killer ass alien-like centipede parasite thing is eating everyone from the inside out. The Crustacean Queen and crab eating contest people puke and die, the hospital is overrun, dead people line the streets, people kill themselves to avoid dying by aliens crawling out of their guts, and the government, represented locally by a douchebag mayor whose desalinization plant is partly guilty for the eco-horror, does everything in its power to cover it up. They close the bridge to the town. Homeland Security and the Center for Disease Control bicker with each other over Skype about how this could’ve been avoided (chicken shit runoff into the bay is also partly to blame). The government is definitely as much of a villain in the film as the grayish crawfish-looking killers.

The day before I saw the movie, I went to the waterfront Maryland town of St. Michaels’ Oyster Festival and ate a dozen and a half oysters directly out of the Chesapeake Bay. That same day, I wore water shoes and waded in the Bay looking for sea glass at low tide as I normally do. These two activities haunted me every single minute I watched the film. I found myself hoping oyster shells are closed tightly enough against potentially deadly parasites.

I knew the movie wasn’t real, but Levinson’s choice of a mutated actual real life isopod (cymothoa exigua eats the tongue of a fish and replaces it with its own body) gave me the complete willies. It theoretically could happen, and that’s one of the things that make this a great film. The Bay really is 40 percent dead like it says in the movie. I knew from the Times article that Levinson had originally been asked to make a documentary about pollutants in the bay and had chosen the fiction genre because he thought it would get the environmental message across better.