The Walking Dead Season 3 is full of suspense. 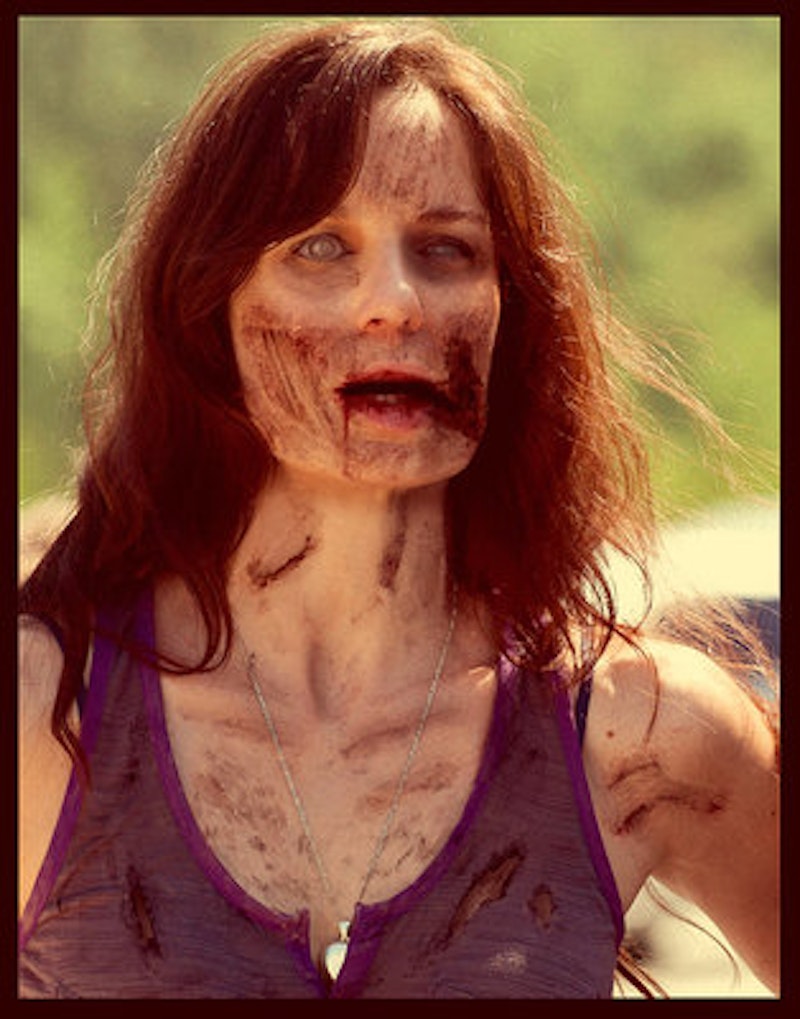 I don’t watch TV. Really. Absolutely none, if you don’t include online clips of The Daily Show with My Imaginary Boyfriend Jon Stewart. It’s not that I’m an anti-electronic device person. The kids hog the TV and I’m usually asleep by nine p.m. I do like to watch whole seasons of TV shows at one time on DVD, Netflix or Amazon Prime Instant Video. And when I am into a show (Weeds, Breaking Bad, Dexter to name a few) I watch an entire season at one time.

Right now, there is an exception to my generally TV-less state.

I started watching The Walking Dead in my usual style, a season at a time, in a recorded format. But then I got caught up and became forced to watch a TV show when it is actually on. The only time this has come close to happening is with Breaking Bad. I love that show, but have been able to restrain myself to waiting until a full season is over to watch it online.

The Walking Dead, in case you’re not familiar, is the AMC series featuring a group of survivors in a post-zombie-apocalyptic world. The show is based on a series of comic books. The entire collection of those comics, and therefore potential answers to what will happen in each episode, rests on a table next to my bed, but I refuse to read ahead to find out what happens.

So, last week when they killed the show’s soccer mom, Lori, it was a shocker. Now, I’ve never been a Lori fan. I re-pin funny pins on Pinterest about how dumb she is and how no one was sure who the father of her (potential zombie) baby was. I did think it was sad her own son had to kill her during childbirth—I mean, yikes. (And a baby born during the zom poc? Your life is going to suck!) But then I saw the photo (above) that is circulating in the Internet zombie community (snort) and started worrying that it isn’t a photo-shopped thing and that since we didn’t actually see her son Carl shoot her in the head, she might actually be a zombie. Is Lori going to show back up this season as a zombie? If she does, my guess is that it will be the badass redneck zombie killer crossbow hunter Daryl that kills her and not her increasingly psychotic husband Rick.

Another character, Carol, was presumed dead but we didn’t see her die, which to me means she could still be alive as well. I hope Carol comes back as a person and not a zombie though, because she was pretty cool and I wanted her to be Daryl’s girlfriend. Also this season there is a freaky M. Night Shyamalan-esque village where the creepshow “Governor” keeps heads in fish tanks and is raising a zombie daughter whose hair he is brushing. Crazzzzy.

If you’re going to choose only one show to watch on a regular basis, it probably shouldn’t be The Walking Dead. But for some reason, I am captivated by the characters and especially the writing of the show. It’s edgy, suspenseful, and if you consider the awesome violence of the zombie kills, just plain fun. So unless you are someone who enjoys watching zombies killed violently via different gory methods, this may not be the show for you. But man, I am actually breaking two of my own personal life guidelines and watching a show while it is actually happening not to mention staying up past nine p.m. once a week.

Why? Because I just can’t wait to find out what happens next.