Despite Denzel Washington, Flight is a Lazy Loser

Robert Zemeckis’ film is a virtual ad for religion and AA. 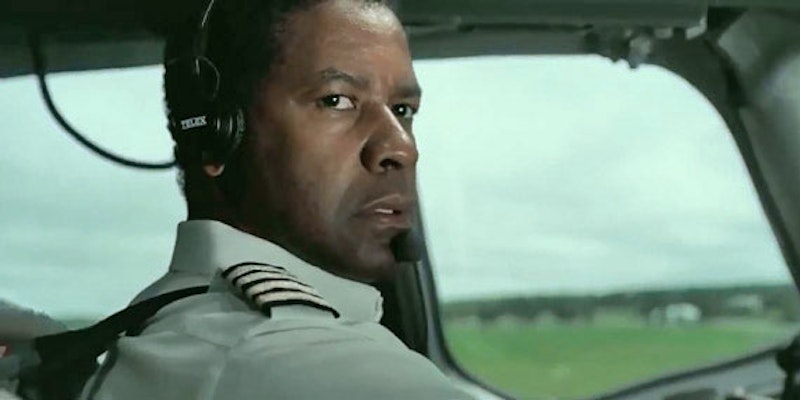 Nobody needs to be pandered to like this. Flight, Robert Zemeckis’ return to live action after three awful children CGI pictures that hawked sentimentality through emotionless, dead looking avatars of big Hollywood stars, is just as goopy and empty as the rest of his films. Big surprise, I guess. This movie is watchable, and it keeps a nice pace until its mawkish, after-school-special ending, but it’s the worst kind of filmmaking: utterly formulaic, cynical, and devoid of feeling, without an original thought in its body or anything unique to say. This is, obviously, typical, of most major American motion pictures, and especially of aging, plump directors with nothing left to prove—but Flight is particularly egregious because of its intensely manipulative and cloying material.

Denzel Washington plays an alcoholic/drug addict who also happens to fly planes, and quite well. After a night of bedding the flight attendant, snorting coke, smoking pot and cigarettes, and drinking buckets of vodka, a freak mechanical error sends his plane into a nosedive, and miraculously (a key word here, as if we didn’t know Alcoholics Anonymous is full of Jesus nuts), he’s able to glide the plane to a relatively smooth landing in a field after a series of absurd rolls and flying the thing upside down. Six out of the 102 “souls” onboard die, so Denzel is declared a hero, despite the fact that everyone on the inside knows he drank on the plane. The FAA gets on his ass, and rightfully so. For one thing, I think plane crash scenes are extra terrifying and disturbing and should always be handled with the respect and somber remove that such a horrific event deserves. It’s one thing to toy with big action set pieces in a mindless blockbuster—but when a film is nothing but a character study, it’s your duty as a filmmaker to be responsible with what you do to get people invested.

This is an awful film because Washington’s performance as an unrepentant alcoholic is riveting and absolutely terrifying. Seeing the toll his addiction takes on everyone around him, let alone himself, is very upsetting. And Denzel’s performance, as well as the work of the rest of the cast, is top notch, in stark contrast to the summer camp script. If some hack were playing the alcoholic pilot, if there was a way to somehow not take him seriously, Flight would be merely anodyne. But Denzel isn’t just convincing. He’s a force of nature in this role, and his version of an addict is nothing short of scary. The fact that such a vivid depiction of alcoholism is enmeshed in such a sappy, syrupy, dogshit movie not only defangs the whole picture, it makes the thing an act of violence instead of merely something to throw away. It’s too much, it’s not insulting, it hurts, it’ll leave you feeling empty and really pretty sad. That’s not to say every great picture is uplifting, quite the opposite. Even the saddest of movies, if they’re well made, well told, and with a script of drive and unique thought, they leave you feeling fuller for having seen something magnificent made out of pain. Flight is unfettered pain compounded by Disneyland morals, lazy filmmaking, and nothing to think about.