Film Review: You Were Never Really Here is a Masterpiece of Pure Cinema

Lynne Ramsay’s fourth film is a kinetic and arresting tour de force. A+ 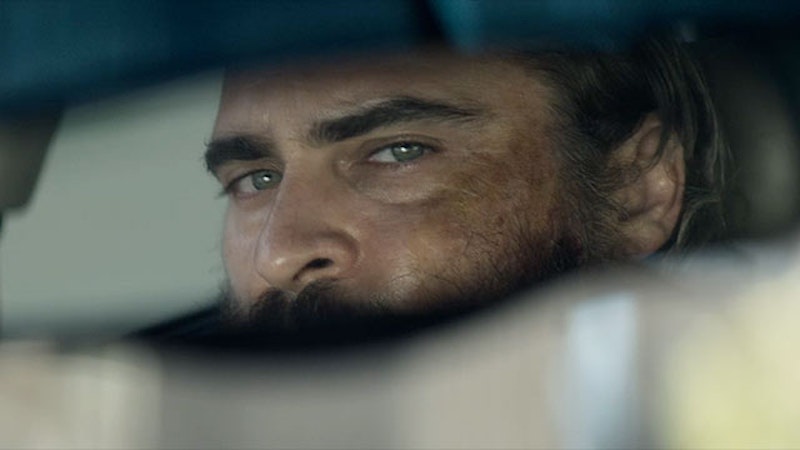 Lynne Ramsay’s You Were Never Really Here is a masterpiece and one of the most cinematic movies I’ve seen in years. At the most basic level—image and sound arranged in montage to convey ineffable emotion—it’s a tour de force and without peer in recent years. I liked the Safdie Brothers’ Good Time, but ultimately found it unsatisfying, not much more than assurance that the brothers will be around for a while making great (and better) films. Good Time was lauded for its claustrophobic cinematography, its unrelenting pace, and Daniel Lopatin’s excellent score. But a third of the way through the film, I became disengaged, and it never got a hold of me again. You Were Never Really Here has a lot in common with Good Time, but its execution is superior in every way.

From the opening strains of feedback and mangled radio waves over black, I was hooked and pinned in place. At only 90 minutes, the film is lean and aggressive without a single moment or scene that lags or drags the picture down. For all the momentum and racing in Good Time, I found the muddy and dark claustrophobia of the movie restrictive and it ultimately left me unmoored and ready for the chase to end. I only compare the two because they have so much in common superficially, but Ramsay’s film has pockets of breathing room and space while remaining constantly on edge.

It’s the apotheosis of Joaquin Phoenix mumbling and disheveled, recalling the stoned silliness of Inherent Vice applied to a tragic figure: an Iraq War veteran wracked with PTSD supporting his ailing mother at home, and taking black market jobs as a hitman/vigilante, rescuing underage daughters of politicians that have been kidnapped and sold to sex traffickers. Ramsay described Phoenix’s character as a man “walking around with broken glass in his head.” This is realized in the masterful editing, which isn’t an all-out assault or a constant barrage of trauma and violence. It’s the most rhythmically dynamic editing I’ve seen in years, with the same gripping excitement of ballet or a brilliant piece of music.

My colleague Stephen Silver wrote a lukewarm review of the movie last week, conceding it was gripping and intense but that it “doesn’t have much of a plot.” There isn’t much dialogue in You Were Never Really Here, but it says so much more in pure image and sound than every op-ed or message movie about veterans and PTSD and sex trafficking that you’ve ever seen. Silver is right that its New York City is “informed by the cinema of the 1970s,” but it’s not just a gritty Manhattan setting and lots of headshots: Ramsay’s film is commanding and dominates the viewer in a way that recalls the best of Bergman, Hitchcock, Altman, Cassavetes, and Roeg.

It’s an experience that you must submit to, unpredictable and strange in ways that other “rollercoaster” paced films don’t approach; a film that lodges itself in one’s mind and refuses to leave before further reckoning. It’s stunning on a technical level, with a superb central performance by Joaquin Phoenix, but all of that too often adds up to little more than flat fireworks on a screen. Leaving You Were Never Really Here, its broken glass brain enveloped me, and I can’t wait to see it again. It’s a testament to the unique power of movies and their ability to rend us in two without a single spoken word.