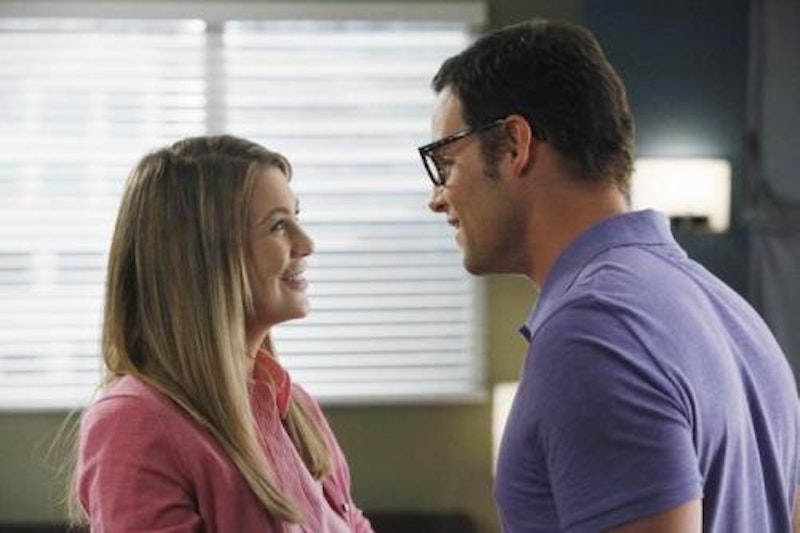 Everything was radically different, and then it just wasn’t. From Married… with Children to Northern Exposure to Will & Grace, the alternative-reality episode has a long, storied history in television—one could argue that every episode of Lost, Aeon Flux, and The Simpsons occurs in its own separate pocket dimension—and last week, the cast, crew, and creators of Grey’s Anatomy proudly joined this particular pantheon by scrambling prevailing alliances, liaisons, marriages, humors, and bromances in and around Seattle Grace Mercy West Hospital for maximum sweeps-week befuddlement.

Ellis—Meredith’s mother and the overbearing matriarchal specter who haunts the series even from the afterlife—is alive, and she’s the Teflon-souled chief of surgery, and she’s Ellis Weber, because in this paradigm Richard divorced Adele and married Ellis. Sullen, fuck-everything attitude endemic Alex Karev is replaced by an optimistic Guy Goforth-archetype Alex Karev—who is engaged to Meredith Grey. Lexie Grey, channeling Bob Markey, is a dreadlocked exotic dancer with tons of tattoos and a hardcore drug problem; Bailey also rocks dreadlocks—wimpier dreadlocks—and she’s a sort of shrinking-violet anti-Bailey. The script supervisor probably instructed actress Virginia Oh to play the revisionist Christina Yang “like Angelica Houston in The Addams Family, or Meryl Streep in The Devil Wears Prada.” Callie’s not a lesbian. Derrick’s hilariously under-confident. The most recent main cast additions are given almost nothing to do. Everything else is too ridiculous to unpack.

But this is all mildly fun, or at the very least promising, for maybe the first 15 minutes, until it becomes apparent that there’s nothing much at stake. That the cockamamie, revolutionary notion of Shonda Rhimes somehow opting to trash the current main plot thread and running with this alternate reality like the Burger King intercepting a Super Bowl pass and making for the exits is not only totally unlikely—it also wouldn’t lead us anywhere we hadn’t already been. That any possibility of coloring outside the lines of who we’ve come to understand these characters to be is straight pretense, as the anything’s-fair-game vibe goosed by the appearances of Addison Montgomery (abdicated to Private Practice) and Charles Percy (dead). Izzy? Preston? George? No dice. Not happening. The producers don’t have the guile or the guts or probably the juice to fuck shit up good and proper, HBO drugged dream-sequence style, to resurrect Dead Denny for a cameo walk-on or something.

So after 15 minutes, everybody begins to slowly but surely revert to already-recognizable personas, as if to underline the conceit that while whatever circumstances brought us to the present moment cannot alter who we are as people, or some Zen bullshit. Endings give way to familiar beginnings, which is a weird way is more manipulative and insincere than that musical-episode abomination from last season. This is quasi-diverting filler, nothing more. Everything was radically different, and then it just wasn’t.