Strenuous and muddled, Safe House is just a movie you get through. 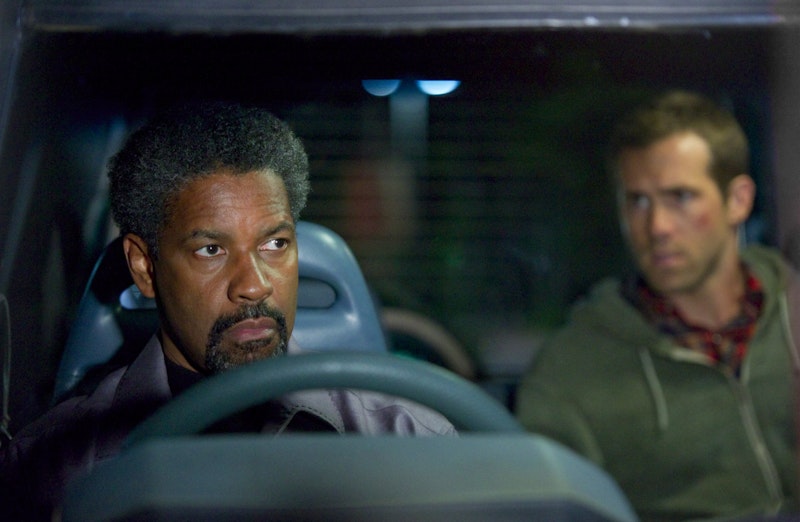 No one applauded when this thing was done. A full house, and the theater had been wrapped up and silent throughout. Except for occasional gasps and a stray “Hee!” at a joke, the only noise had come from the fat girl cuddling with her boyfriend in the seat next to me. And yet there was no payoff at the end. Safe House is a good example of high-level professional filmmaking that’s so routine it barely exists

What is a tense, adult, gritty, stylish thriller like when it’s also entirely standard and prefab? Well, it slams along but has no impact. When it’s finished, you feel like someone has been sticking his fingers in your eyes. Now he’s stopped, life can go on. Maybe you were having a good time, but probably not. Anyway, the question is behind you.

Ryan Reynolds plays a youthful CIA operative who gets his shot at the big time because of a crisis. The crisis is that a turncoat dealer in secret information, played by Denzel Washington, has come in from the cold only to be chased by a gang of assassins to the safe house where Reynolds is stationed. A secret CIA traitor allows the assassins to raid the safe house, so Washington and Reynolds go on the run.

Safe House has no slow moments and not quite enough clear moments. You get the drift of events, but the plot and the physical continuity are hard to pin down. By which I mean that Reynolds makes a big deal of putting Washington, a wily operator, in handcuffs, but then we see Washington driving their vehicle and Reynolds in the back seat. Can you drive with handcuffs? If so, will you be allowed to do so when you’re a deadly rogue operative who can’t be trusted?

The film tries to make up for its gaps by being strenuous. Reynolds to Washington, after a fight scene: “Whuh-whuh-whyyy… areyew’n … Cape Town?” He’s breathing hard and his face looks like a slick of glycerine and dermal abrasion. Less than half an hour in and Washington is waterboarded just to show us how tough he is. (Which defeats the purpose, since the torture winds up looking like one more occasion among many for grunting and heaving.)

Theme statement is also strenuous. Washington to Reynolds, slyly entering his head during a moment’s downtime: “That’s the job. That’s why we exist, to take advantage of people’s desire to believe, to trust.” Ten minutes or so down the road, at the next pipe where he’s cuffed, Washington is back at it: “Everyone betrays everyone.” As before, he says this in a husky mew, a bit over finicky about his consonants, and sounds like an adult showing another adult how to talk to a child. Is this how masterminds talk when they want to be trusted?

Sam Shepard is weathered and off-hand as a CIA elder who says, “People don’t want the truth anymore. It’s messy, keeps people up nights.” Reynolds’s French girlfriend (Nora Arnezeder) says, “Do you want to go back into bed with me?” The character is a doctor starting at a Paris hospital, so the actress is 23 and looks good in cotton underwear. But she has a moment when Reynolds tells her the bad news about his actual occupation, and her face expands like a clammy, red-and-white sponge swelling with tears.

That’s the gritty side of Safe House. The movie plays fair by its own precept: Everybody in the film looks like their skin has been worked over by a hard reality and then worked over some more by Hollywood and then shot by sodium flare on a digital camera, with the footage edited by skittish hummingbirds who want the shots to move fast and to never give an overview of a place or action. The soundtrack is devoted to crisp but giant whams and thwacks to indicate the deadly skill the fighters would show if we had a better look at them fighting.

None of these effects are bad, and the makeup commands respect. But Safe House is so intent on working you over that you can’t take it seriously. During Denzel Washington’s mighty death inhales (“heee-ah, heeee-ah”) a girl in the next row started to laugh. The film didn’t deserve any better. Forty minutes in and I knew who the secret traitor was. I had missed the bit where the characters actually said there was a traitor, but there had to be one and, with that as a given, you couldn’t ignore where the film was stacking its chips.

Forty-five minutes later and the traitor got around to showing his hand (“C’mon, let’s get moving,” followed by a quick bullet fired into a CIA colleague). The fat girl looked up from her boyfriend’s neck. “I knew it was him,” she said. It was that kind of film.