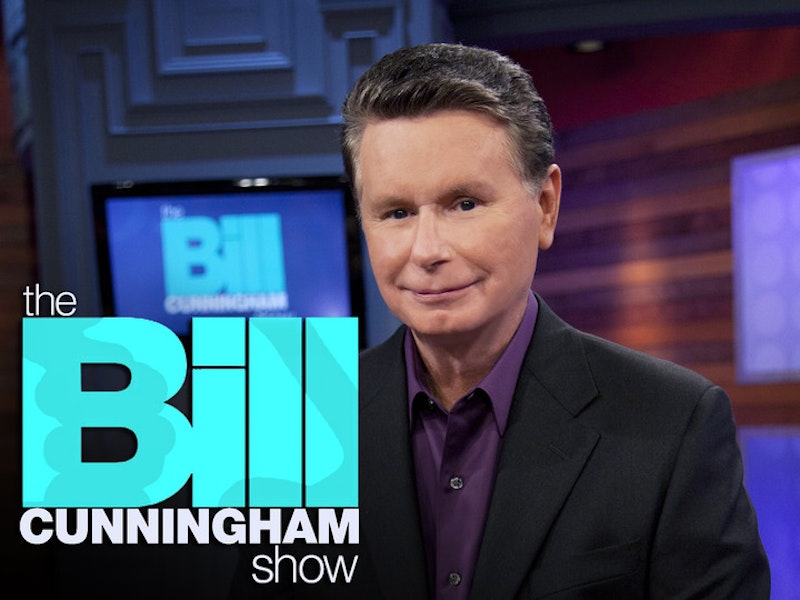 Since Oprah Winfrey's departure from the daytime talk show circuit, the format of tabloid-style programs in first-run syndication has undergone an identity crisis. While numerous monoliths of daytime talk have continued to draw large audiences and newer shows have premiered with respectable followings, much of the industry is coasting on time-tested formulas with conspicuous staleness permeated with palpable desperation. Nowhere is this more apparent than in one of the latest offerings, The Bill Cunningham Show.

If the name sounds familiar apart from the daytime talk show, currently in its first season, it's because Cunningham is a longtime staple of talk radio, with his own weekly show and frequent appearances on various conservative television programs. His style is ostensibly of the "no nonsense" brand popularized by Judge Judy, Dr. Phil, and Steve Wilkos but with a decidedly gentler and more sympathetic bent.

It wasn't originally supposed to be so bland. Lawsuits are still pending from an episode recorded during its test run in 2010. During this episode, which was never broadcast, Cunningham and his staff were allegedly abusive to the guests (contestants from child beauty pageants and their parents and guardians) and encouraged audience members to follow suit. Among other offenses, guests alleged that Cunningham and staff repeatedly accused them of appealing to child molesters for profit and berated them in a humiliating manner.

This behavior is very consistent with Cunningham's track record as a second-string conservative media personality, whose previous moments in the spotlight resulted from the occasional off-color remark or display of racial insensitivity. But at some point between the test run of his television show and its official premier in fall of 2011, his caustic tone was apparently toned down and repackaged in its current form as a lukewarm and very minor participant in the lucrative Cult of Personal Responsibility that has ruled the airwaves for over a decade.

As with others of its ilk, The Bill Cunningham Show features a range of guests typically plagued by issues such as drug addiction, infidelity, and juvenile delinquency. With all the relevance of an episode of Phil Donahue from the 80s, the show explores these middle-of-the-road topics as Cunningham grins ghoulishly, dispenses the wisdom of the authority figure you learned to humor but never take seriously, and asks his equally useless and out-of-touch audience members to contribute to his pandering and paternalistic lecturing on how to be a better person.

So what does anyone even get out of this show? As sanitized as his image was made in the transition to television, he can still barely conceal his contempt for the crackheads, deadbeat dads, and sexually experimental youth he claims to want to help. And he's too goofy to be intimidating or present himself in the same mold as his competition. As online and cable TV formats hog more and more of the audience, daytime television talk show hosts have become even more pedantic, moralizing, and aggressively reductive because that's what their dwindling demographic demands. This ugly and condescending ideal is what a newcomer like Cunningham aspires to, and he's all the more of a tragic figure because of his failure to preserve the judgmental and repellant personality his radio listeners have come to know and is instead the living embodiment of daytime talk's evaporating significance.