On An Award Tour

The Golden Globes, BAFTA and SAG all have varying amounts of relevancy, especially in predicting the eventual Academy Award winners. 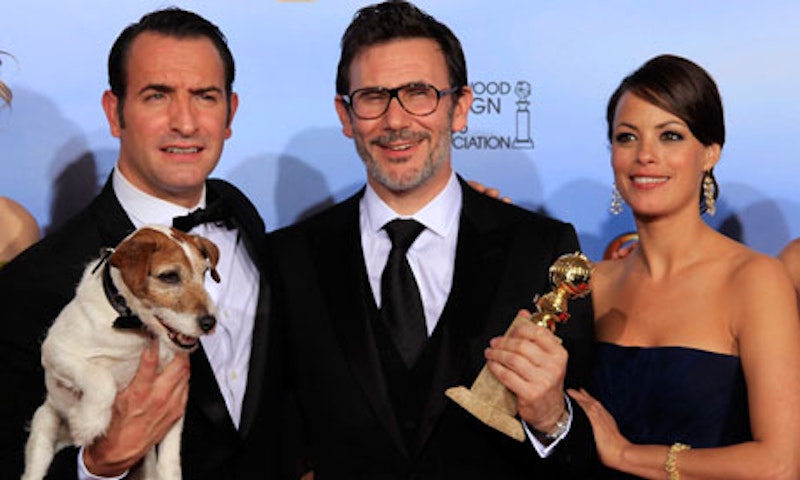 Come Hollywood’s annual awards season, one must first weather three major pit stops before arriving at the Oscars. Each member of this trifecta—the Golden Globes, SAG, and BAFTA awards—carries its own distinct and varying degrees of relevancy and clairvoyance concerning the eventual Academy Award winners. The Globes, as determined by the Hollywood Foreign Press Association in mid-January, are, to put it kindly, starfuckers. For evidence, look no further than George Clooney’s three nominations this year, which hilariously included Best Director for the entertaining but rote Ides of March. More often than not, the HFPA’s nominations and the Academy’s have relatively little in common, particularly given the former’s division of Comedy and Drama into their own categories.

The BAFTA awards, last stop on the precursor train in mid-February, tend to favor their countrymen and women above all else. This year, look for cold war caper Tinker, Tailor, Soldier, Spy, to rack up the majority of the awards along side The Artist. The British Academy of Film and Television Arts are also prone to both inspired and unorthodox decisions. They deserve a standing O for nominating Drive, one of 2011’s very best films, in the Best Picture and Director categories, but I couldn’t be more puzzled by their choice to pass over Ryan Gosling and Albert Brooks, and hand previous winner and English darling Carey Mulligan a Best Supporting Actress nomination. Mulligan had next to nothing to do in the film, and should instead be recognized for her career-best performance in Shame. For some reason, the Academy mistakenly longlisted her as lead in Steve McQueen’s character study of sex addiction, while they correctly placed The Artist’s Bérénice Bejo in the category, despite Harvey Weinstein’s insistence that she is supporting.

BAFTA’s placement in the season’s calendar can certainly prime them for a last minute influence on the stragglers who are still filling out their Oscar ballots a mere week before they’re due, but the body that tends to be the most accurate predictor of Oscar is the middleman: SAG. SAG, the Screen Actors Guild awards, is an opportunity for actors to award one another for their work. It also so happens that the actor’s branch is by far the largest in the Academy of Motion Picture Arts and Sciences, at around 25 percent. Not all SAG members are AMPAS members, but there is a substantial crossover. In fact, many of the so-called Oscar morning shockers in the acting categories can be traced back to the SAG nominees. Those who were outraged at a Michael Fassbender “snub,” for instance, might not have been as surprised had they noted SAG passed over him in favor of Demián Bichir.

Further, one mustn’t discount SAG’s potential as a genuine foreshadower in the acting categories on Oscar night. In the past seven years, SAG’s Best Actor winner has gone on to claim the Oscar, which bodes well for Jean Dujardin’s possible upset over Clooney. Best Actress has gone eight for 10 in the past decade, though the two-year discrepancy is easily explained by SAG’s voting tendencies. Arguably more so than any other voting body, SAG favors career longevity, often awarding colleagues for a body of work, or simply out of respect. For this reason, Julie Christie was chosen over Marion Cotillard in 2007, and Meryl Streep over Kate Winslet in 2008.

So what do this year’s winners say about SAG? What do actors admire in their contemporaries? Octavia Spencer, winner of Best Supporting Actress for The Help, enjoyed another chink in her televised awards belt this past Sunday, despite the fact that her co-star Jessica Chastain all but swept every State and Association in the nationwide Critics’ awards. (It should be noted that Chastain was usually awarded for her work in The Tree of Life, Take Shelter, or a combination of all three, as opposed to solely for The Help. It’s hard to pick a favorite when it comes to this exceedingly versatile actress, but if I had my way, she’d be nominated for Take Shelter, along with her co-star, 2011’s best male performance, Michael Shannon.) At 41, the charming Spencer has been an unknown in the business a long time, and my guess is actors love seeing one of their own finally hit it big in an entertaining, showy, likeable, albeit exceedingly stereotypical, role.

Her counterpart in the Best Supporting Actor category, Beginners’ Christopher Plummer, has the Oscar under lock and key as well, though for a more deserving performance. Plummer has not only enjoyed an outstanding and varied career, but is the backbone of this otherwise twee film. He navigates the discovery of his cancer and embraces his late in life coming out with equal parts grace, courage, humor, and heartbreak. It’s a demanding role, but Plummer makes it appear effortless, which no doubt won him the admiration of his fellow actors all over again. Plummer’s sweep is certainly overdue concerning his catalogue, but it is also 100 percent earned by this role alone.

Best Actress winner Viola Davis, known for her stage work, is one of the most respected talents in the business, despite having never landed a starring role until this past year. That she shares the bill with Emma Stone, and that the film is The Help, is unfortunate for a variety of reasons. Despite the movie’s obvious pandering, Davis’ is a deeply touching and affecting performance as it is subtle. There’s no mistaking she’s a fantastic actress, and I suspect many of her contemporaries worry that this may be her only shot at a leading Oscar—Streep and Williams will be back, for sure—and they’d like to give her as much momentum and support as they possibly can.

The sole surprise of the night came when Natalie Hershlag, ahem, Portman, read Jean Dujardin’s name. In case you haven’t heard, Jean Dujardin plays the leading role in The Artist, a black and white, and almost—barring the music, sound, and a couple lines of dialogue—silent film. I preferred his performance to Clooney’s in the lackluster The Descendants, where, as usual, he played a version of himself, but to me it seemed SAG wanted to award The Artist, and this was the only category in which they could do so. After all, Clooney has lots of friends in the business, and it’s unlikely many actors had even heard of Dujardin. Still, carrying a film in silence is no easy feat, and Dujardin is as impossibly charming as one could be.

Finally, The Help, with its third win of the night, picked up Best Ensemble. Though this can be described as SAG’s version of Best Picture, fear not for a Crash 2.0: The Artist has the Oscar in the bag. This tends to be the show’s most unusual category for the simple reason that SAG is awarding the ensemble alone, and not the overall film. There’s no denying The Help is an actor’s movie: it’s entirely character driven, there are about five impressive performances, and everyone else does a fine job. I don’t take issue with the fact that SAG was moved by and favored the acting in the film; what I do take issue with is that The Help is the film these actresses have to be recognized for. Seventy-Two years after Hattie McDaniel won an Oscar for playing a maid, Viola Davis and Octavia Spencer are—most likely—on the verge of winning the exact same award for the exact same role. In awarding Davis, Spencer and the cast for a stereotypical white savior movie like The Help, SAG is inadvertently reinforcing the unfortunate notion that the strongest roles for their fellow minorities lie in the same subordinate archetypes they did almost a century ago. It’s a catch-22: support the actor, support the message. It seems as though SAG chose to disregard the latter, giving credit to their contemporaries as they see fit.