Simchas and Sorrows is a little long, but Hari Nef is great. 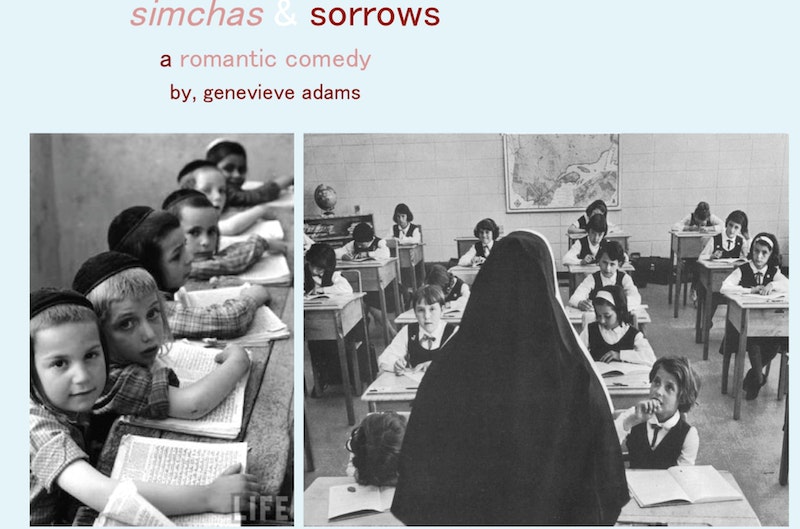 Sometimes a movie is so specific in the details that you know it must be at least partially autobiographical. That's the case with Simchas and Sorrows, the new film written, directed by and starring actress Genevieve Adams. The film, out on VOD after a brief theatrical run, stars Adams as Agnes, a struggling actress in New York who, with an unplanned baby on the way, agrees to marry her Jewish boyfriend, Levi (Thomas McDonell). A lapsed-Catholic-turned-atheist, Agnes agrees to convert to Judaism. But the path is more complicated than it first appears.

The plot of Simchas and Sorrows runs through the gauntlet of controversial subjects among the Jewish people in the 21st century: Interfaith marriage, anti-Semitism, secular/religious tensions, whether a Jew living with a non-Jew can tolerate a Christmas tree in their home, and the temptation to invoke the Holocaust in situations that don't warrant it. This is a movie, thankfully, that takes religious faith and observance seriously. The film touches the third rail of the Israeli-Palestinian conflict, in a rabbi's Yom Kippur sermon that, in many real-life synagogues, would likely trigger an emergency session of the temple board as soon as the high holiday was over.

Shiva Baby this is not, where a large Jewish New York family in a small space is treated like a claustrophobic terror. Levi's parents are about the nicest people alive, with the father even giving a heartfelt monologue to his son that recalls the Michael Stuhlbarg speech at the end of Call Me By Your Name. Levi's brother and in his own convert wife are jerks, but to the point where you can guess early on that a redemption arc is on the way. There’s conflict, but it's delayed. The boyfriend suggests she convert… and she says she will. His Jewish family… approves of her. And nobody is scandalized by the unplanned pregnancy. Simchas and Sorrows is messy in ways large and small.

Its nearly two-hour running time could’ve excised about 30 minutes, and one gets the sense this was so personal to the filmmaker that she didn't want to lose, say, the multiple scenes set in a casting office, or her experience playing a prostitute on a movie set. One scene is shot to look like a seduction, even though it shouldn't be. And the film punts on its central unresolved plot point with a weird, out-of-nowhere plot twist. Still, Simchas and Sorrows showcases New York City well, in the tradition of the romantic comedies it's trying to emulate, and the performances are decent.

Hari Nef is a highlight as a feminist rabbi, after she also played a rabbi in the recent Sex and the City reboot season. Her character is the type of progressive female rabbi that the Reform movement has minted dozens of in the last two decades, without the phenomenon really making into the movies until now. Nef, the actress, is a trans woman—her arc in the Berlin flashback scenes in the second season of Transparent was the very best the show that ever got—but it's not clear if the character is. John Cullum, from Northern Exposure, is in his 90s and had his first acting credit in 1956. He has some nice scenes as Agnes' grandfather.