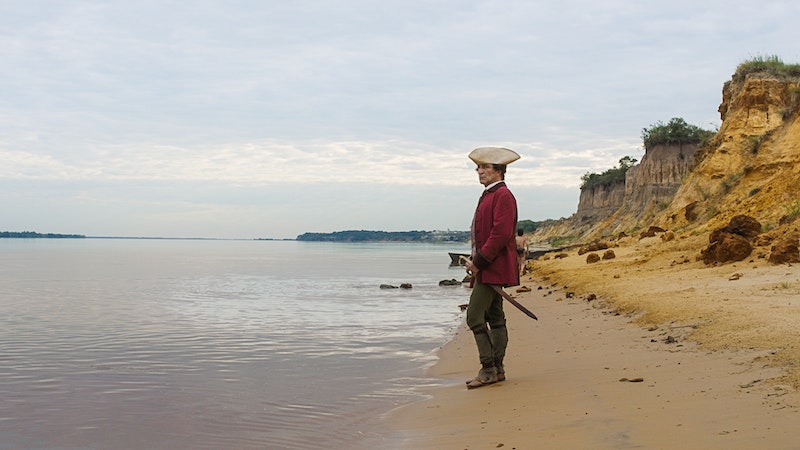 I’m waiting with bated breath for auteur Lucrecia Martel’s newest masterpiece. She was approached in 2019 with an offer to direct Black Widow, but declined because Marvel wouldn’t allow her to direct and choreograph all of the action sequences. Martel hasn’t directed a feature film since her historical epic Zama, released in 2017.

Zama follows a low-level magistrate, Diego de Zama, in a frontier outpost in 17th-century Argentina. He suffers from ennui before becoming unraveled and betrayed by the colonial hell in which he’s complicit. Eventually he and his minor ambitions are swallowed by the wilds of Argentina. Like most of Martel’s movies, her character de Zama grows too comfortable, nonchalant, too readily acclimated to a wild and dangerous clime, ignorant to all warning signs. The scenes that make up Zama, like most of Martel’s features, loosely branch together and occasionally come together at a hub to mark that some narrative time has passed. This biological structure is even more apparent in Martel’s debut feature La Ciénaga, where interactions between characters loom with a sense of oncoming yet unexpected disaster, or the threat of an upheaval from the past.

Martel’s films are so innovative, artful, and expansive. Casual body horror, gallows humor, bourgeois entropy and decay… I always think of rot. Her films explore the messy reptilian-brain undercurrent of humanity that can’t be covered up by polite society, or, what is etiquette in the face of a chaotic environment like the Argentinian highlands? Her characters move through natural landscapes both raw and sensual—the kind of primal energy that can easily overpower any civil convention. The chaotic social scenes in which they move are eventually mirrored, and then dictated, by these environments. Whether through apathy, boredom, or surrender to the intense heat and humidity, Martel’s characters always succumb to their base desires, simply because it’s the path of least resistance.

It’s not that dour: there’s always a certain level of acceptance these characters have towards their precarious settings, a sense that’s constantly warning them of imminent danger. There’s a feeling in all of Martel’s films of humid doom—how fragile and easily mangled our frail bodies could be rendered at any moment. In La Ciénaga, a wealthy family in Salta, Argentina wiles away the summer in a neglected hacienda. The mood teeters on the edge of disaster. Dogs barking, guns and machetes errantly waving around, lightbulbs exploding, phones ringing incessantly, scars, disfigurements, hospital visits, screaming kids, putrid pool water that could get you sick, unsteady ladders... the characters can’t be bothered, bogged down in the heat and humidity. Maybe it’s a byproduct of their empty, bored selves emanating outwards, or have the haphazard vines and overgrown mountains consigned them to the roles of rotting furniture in a forgotten house?