How to Fix The Real Housewives of New Jersey 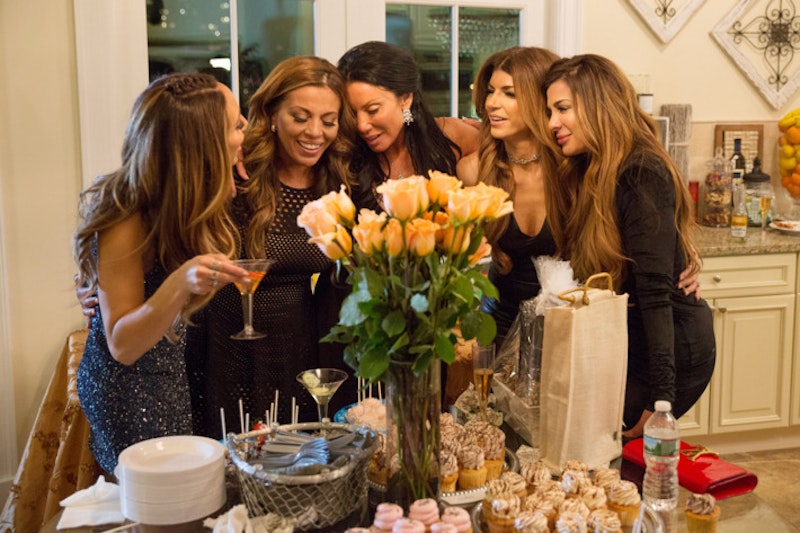 In the mid-1960s, when Angela Davis was studying philosophy with Marcuse and Adorno, she put her research on hold to join the Black Panther movement. Adorno, that paragon of cloistered academia, was against it. According to Davis, he thought the move “was akin to a media studies scholar deciding to become a radio technician.”

However ill-advised that was coming from Adorno, it’s the same advice I’d give today to Chrissy Teigen. She’s already famous as a model and television host, but on Twitter Teigen is gaining notoriety as a Real Housewives superfan and analyst.

And now, like Angela Davis, there’s speculation that Teigen might be transitioning from theory to praxis. In a clip for “Page Six” last week, Melissa Gorga served up an impassioned entreaty to Teigen, explaining why she’s be perfect addition to The Real Housewives of New Jersey cast.

It’s nonsense, but the idea is forgivable. It hews to a minor trend over the last couple of years, whereby Bravo has started to recruit women of a certain preexisting, C-list celebrity to join the show. We’ve seen retired soap stars Lisa Rinna and Eileen Davis in Beverly Hills, and then tabloid socialite Tinsley Mortimer in New York City. I call this the “Rinnafication” of Real Housewives, and it’s not a particularly good thing.

But the real reason for Gorga’s plea is that RHONJ seems to be in trouble. With weak ratings, Siggy’s abrupt departure, and clocking in at only 13 regular-season episodes, there are rumors that the show might be canceled. In truth, the show never quite got its footing back since Teresa was sent to prison in 2015, during which time the show took a one-year hiatus.

I’d be shocked if the show was actually canceled, but there’s no doubt that it needs a recharge. With respect to Teigen, here are two real ways that the show can return to form.

Move on. Like other longtime fans of the show, I was excited—ecstatic, honestly—when I heard that Danielle Staub was coming back last year. If you know the name, then you probably already know that Staub is one of the most notorious Real Housewives of all time. After a disastrous two-season stint, culminating in the most violent reunion episode ever, Staub went on to suffer a defamation suit, a sex tape, and rehab. Since then, she’s had a kind of persona non grata status, making her return somewhat unthinkable.

Along with Rinnafication, this is another guilty impulse: we of the Real Housewives hardcore frequently call for the return of Real Housewives past, whose flame burnt bright briefly. In Orange County, I pine for Gretchen Rossi’s comeback; in New York, it’s Aviva Dresher; out in Beverly Hills, my heart waits for Brandi Glanville.

But in this regard, what we saw this season with Danielle was a keen reminder of the show’s structural limitations. Bringing back a former Real Housewife can, at best, create a sense of closure. To be fair, this past season did accomplish this, to an extent, in the form of a surprisingly genuine conversation between Teresa and Danielle’s younger daughter. But this was only a digression, and Danielle’s presence on the show ultimately had little impact.

Jacqueline’s soft exit in season 6, followed by her full return in season 7, had a similar vibe. Mostly, her fights with Teresa felt like a senseless recapitulation of drama we’d already seen before. The conflict lacked the verve, spontaneity, and urgency that docu-soaps thrive on.

And so, bringing back former Real Housewives is not likely to be a fount of new vitality. A new era requires confidence and linearity, its own independent momentum. The past matters, but in Real Housewives, as in life too, the only true way is forward. So please don’t do something stupid like bring back Caroline Manzo.

Instead, Bravo should focus on the cast it has now, identifying the women with the strongest and most meaningful interpersonal links. In turn, it should drop anyone that doesn’t feel cemented. Now that Siggy has quit, this means saying goodbye to Margaret. Sorry, Marge.

Then, producers should refortify the relationship between Teresa, Melissa, and Dolores as the show’s core. Built upon that solid foundation, the cast is still wide-open for at least two more women.

Focus on family. At its best, RHONJ has been a show about family—specifically, the excruciating pain that attends matters of blood and marriage. By season three, when virtually everyone belonged to one of two clans, we practically needed family trees of the type found in Tolkien and Márquez to map the intricate genealogies of House Gorga and House Manzo.

But ever since the Guidice family’s legal problems came to a head, family ties have had less to do with cast composition. And yet, in this latest season, all of the most compelling storylines still involved family: the passing of Teresa’s mother, Joe Gorga’s relationship with his daughter, and my favorite, Dolores’s usual relationship with her ex-husband. These were the things that made the show enjoyable. Meanwhile, the season’s ostensible fulcrum—Siggy versus Margaret—just didn’t quite land, because we never had a reason to value their friendship in the first place.

Unlike shows set in New York City and Beverly Hills, which convincingly depict their native Real Housewives as stars, entrepreneurs, and socialites, the Garden State characteristically features Real Housewives of a smaller-town mindset. Family is a big part of all Real Housewives shows, but RHONJ in particular thrives on familiarity and intimacy. It unfolds in a space wherein the parochial feels cosmic, in precisely the same manner as anyone else’s family folklore. It’s a reminder, somewhere between cozy and claustrophobic, that so often life really does come down to the quality of our most basic relationships. Book deals and restaurant openings look a lot less glamorous, a lot less fulfilling, when you can’t manage to get along with your sister-in-law.

Family is a foundational aspect of the literary, and to the extent that it’s genuine it’ll always be a worthwhile study for reality television. There’s plenty left to mine, and it doesn’t just have to be more Teresa versus Melissa. Dolores’s family life is fascinating, and if Bravo can cast new people with preexisting ties to the show’s interpersonal core, there’s the potential to unveil seasons worth of compelling drama.

In 2009, Real Housewives of New Jersey marked a turning point for Bravo. It was the first breakout success of the Real Housewives universe, and it set the early standard for what the collective franchise would go on to offer. Since then, Bravo has added five more cities and with them, dozens of incredible personalities. But none are quite like the ladies of New Jersey, flowers of that mutant garden, and it’d be a big loss to have to say goodbye to them.