Here and Nowhere Else

The necessity for the topical omnibus/anthology film in America. 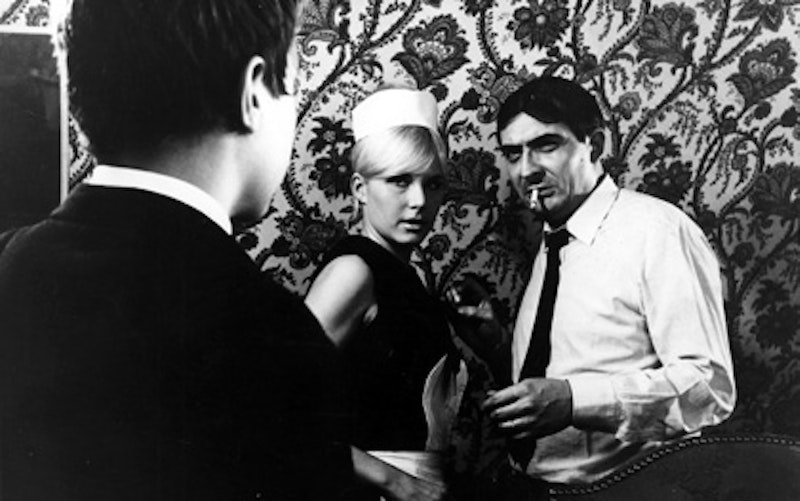 Before watching Six in Paris (recently released on DVD for the first time by Icarus), it never occurred to me that the United States hasn’t had a significant anthology or omnibus film in at least half a century. Does New York Stories ring a bell? Maybe Paris, je t’aime—but that came out 15 years ago and was a European production. There were more under the studio system of Classic Hollywood, but even then it’s curios like If I Had a Million, and no masterpieces. Such a system not only made it possible but easy to wrangle together half a dozen stars and some of the best directors in the world at the time. There’s “solidarity” there: when artists are working near each other, they’ll collaborate, formally or indirectly; on the other hand, egos too close for comfort produce their own brilliant works of revenge and rivalry.

Howard Hawks saw High Noon and, “thought it was a piece of junk… I thought it was phony,” so he made Rio Bravo in response. Going back a decade to 1948, Hawks had John Wayne play his first real heel in Red River, and Wayne’s frequent collaborator and torturer John Ford saw it and told Hawks, “I didn’t know the dumb son of a bitch could act.” Ford immediately cast Wayne as an old man in She Wore a Yellow Ribbon, a key film in the actor’s body of work that wouldn’t be there unless Ford saw what his peers were doing and reacted.

Six in Paris, assembled in 1965, suffers from too much bad handheld camerawork. Only Claude Chabrol’s segment, La Muette, has any satisfying images (though Éric Rohmer’s piece, a quick caper, is fun enough). [https://www.youtube.com/watch?v=RWWEsMIw0J8] Jean Rabier shoots Chabrol and star/muse/wife Stéphane Audran in their actual home as Chabrol takes on the part of the bourgeois monster husband he’d make so many of just a few years later. His son (played by an actor) walks in on Chabrol groping the maid in his bedroom. He scoffs at his son when he opens the door: “I wasn’t doing anything, she was just showing me around.” The maid leaves and the son, silent, stares at his father as he drapes himself on the too-small-bed. A nub of a cigarette hangs from his mouth, the face of death: “Did you finish top of your class?… Good… It’s good to finish on top.”

Audran plays dumb, and through the eyes of their son (who finds earplugs and puts them in to drown out his parents’ bickering), we see their marriage break down. Audran asks her husband why he’s leaving so early: “I have to work…” “You know I know it’s the maid’s day off!” Chabrol pushes her down the stairs, and she dies like a rag doll as their son walks off reasonably happy to another day of school in Paris. Again, because of Rabier’s precise camerawork (in other words, he used a tripod), Chabrol’s piece towers over the rest of Six in Paris, which surprisingly reaches its nadir with Jean-Luc Godard’s contribution (a “half work”—Godard just “conceived” it, while Albert Maysles shot it—poorly). La Muette comes at the end, saving the film from the dustbin.

I’d say the same about 1978’s Germany in Autumn and the 30-minute piece by Rainer Werner Fassbinder that opens it. Even more than Six in Paris, Fassbinder’s segment practically erases the rest of the film, another 90 minutes of contributions from directors like Alexander Kluge, Volker Schlöndorff, and Margarethe von Trotta. One doesn’t necessarily have to know about the Red Army Faction or the 1977 “German Autumn” to understand what Fassbinder’s segment is about: political turmoil, national unrest, violence in the streets, and reasonable paranoia about state surveillance echo through every home and relationship in proximity.

In his essay “Through the Looking Glass,” Nick Pinkerton points out that Fassbinder, a fan and conscious rival of Chabrol, must’ve seen La Muette at some point, and perhaps used it as the starting point for his own omnibus contribution 12 years later. In both pieces, the directors present themselves in their own homes looking and acting as boorishly as possible, with Chabrol doing a dry run of the Jean Yanne role in This Man Must Die, and Fassbinder looking as bloated as ever, incorrigible, obnoxious, horrible to his lover and his mother, and a bipolar paranoiac with a cocaine habit that clearly isn’t going away anytime soon. I can’t see any contemporary American filmmaker daring to be so open in their work, despite the current corporate emphasis on personal trauma and “journeys” and “healing.” That’s all wallpaper in comparison.

Oppression begets oppression, and when Fassbinder throws out his lover out of their apartment and immediately calls for him to come back, like a baby, his earlier comments to a journalist about the hope of people seeing his films about marriages and perhaps reconsidering their own marriages are thrown into sharp relief. This was an artist vivisecting himself in “solidarity” with his peers, whose contributions (admittedly, says von Trotta) paled in comparison. Nothing else addressed the immediate problem of political issues effecting personal lives in direct ways.

Such is the nature of collectives, friends and peers: only rarely, like with Classic Hollywood or the French New Wave, do you get a solid batch of at least two dozen top directors and actors. Two years after Six in Paris came a much better film, Far From Vietnam, an international collaboration which again features a Godard segment, but this one is the diamond: we see Godard behind a gigantic Mitchell camera from various angles, his right eye always in the viewfinder and his face always half obscured. He describes, in voiceover, a dilemma he faced when approached about the film: “I wanted to show the beautiful thing in the world—a naked woman—torn apart by cluster bombs.” But before being denied, he leaves it there, and continues speaking in the same measured tone he’s taken throughout his typically circuitous thoughts, most of it “cushion” that makes the comment about the image we don’t actually “see” but can’t get out of our minds all the more shocking when it comes.

There’s no war now (an incorrect statement, but functionally true in daily life for millions of people), but we’ve been under the thumb of the coronavirus pandemic for over a year now, and even though most say they’ll never watch anything corona-related now or ever, I don’t know how American artists can avoid dealing with this period directly in the work. Imagine six prominent American filmmakers coming together to make an omnibus work about the last year, and everything in it: the virus, the election, the protests, the reshaping of our economy. Who could rise to the occasion if asked? More importantly, who’d have the initiative to ask?

I’m struggling to think of six filmmakers who could cohere and produce something substantial, and I doubt they’d get along: Kelly Reichardt, Clint Eastwood, Quentin Tarantino, Jordan Peele, Spike Lee, and Eliza Hittman. An odd bunch, but there aren’t many openly political filmmakers in America who are also still good. I’m not interested about what Oliver Stone has to say about the pandemic, and I left documentarians like Alex Gibney out (who already has a coronavirus documentary, released many months ago). Tarantino, I should clarify, isn’t political in the least, but the pandemic’s worldwide closure of movie theaters surely could’ve produced some of the greatest and most personal work of his career. And he’s someone who could rip his guts out and make something beautiful on camera.

But, like so many others, he’s isolated physically (in Tel Aviv, no less)—but I also don’t think there’s any real community between filmmakers in America right now, or at any point in my lifetime. The 1990s may have had some great films and many new good directors, but it was not like the “New Hollywood” of the 1970s, there was never any threat to the superstructure: Miramax, a division of Disney, released Pulp Fiction. Tarantino, and later Wes Anderson and Paul Thomas Anderson, were “units of one” as they collected their wunderkind magazine profiles and became friendly. They all hung out, they all laughed, but for what? To do coke in a locked screening room while a miserable Fiona Apple tries to get out?

Maybe this is why there was never a real response to 9/11 in American cinema. This is astonishing to me, and as we approach the 20th anniversary, there hasn’t been a decent film about 9/11 made by an American (United 93 and World Trade Center, both released in 2006, are atrocious). There was a Franco-American film in 2002 called 11/9, but here in the States, people were silent. Beyond “go shopping,” the invasion of Afghanistan blunted everyone’s artistic behavior, and we started to “rebuild” before anything had really started. There was a “concert for 9/11,” and it was star-studded, you bet, just a month after the attacks—yet with Iraq, crickets.

This was an odd mixture of Pearl Harbor-esque “induced ultra-patriotism” and the media blackout on anything about the subsequent wars. There were no coffins on the news, nor much up-close footage of soldiers, civilians, and “enemy combatants” ripping each other apart. Just a few blurry shots of explosions in the distance, filtered through night-cam, always too far to tell that anyone’s hurt, that anyone’s there at all, way over there, where boys and girls fear to tread. You don’t want to, right? Have a Corona.

American cinema must respond directly to what happens in our country. Direct missives, uneven as they often are, can be essential documents for survival in tense times. There are many works that deal with facets of the millennium so far in an indirect way, and the best of them—by Reichardt and Hittman—are brilliant. But these are “units of one,” and together we are stronger: simply being present, expressing “solidarity” in absolutely literal terms—physical proximity—is necessary for any kind of useful commentary to emerge. Otherwise, it’s more from the Human Torch or whatever about how dealing with death is hard. Yes. Yes it is. Where’s my camera?