Dirk Bogarde's Beginning in the Cinema

The Woman in Question (1950) and The Sea Shall Not Have Them (1954), while early in his career, have glimpses of the intricacy and complexity that will emerge in the actor's later work. 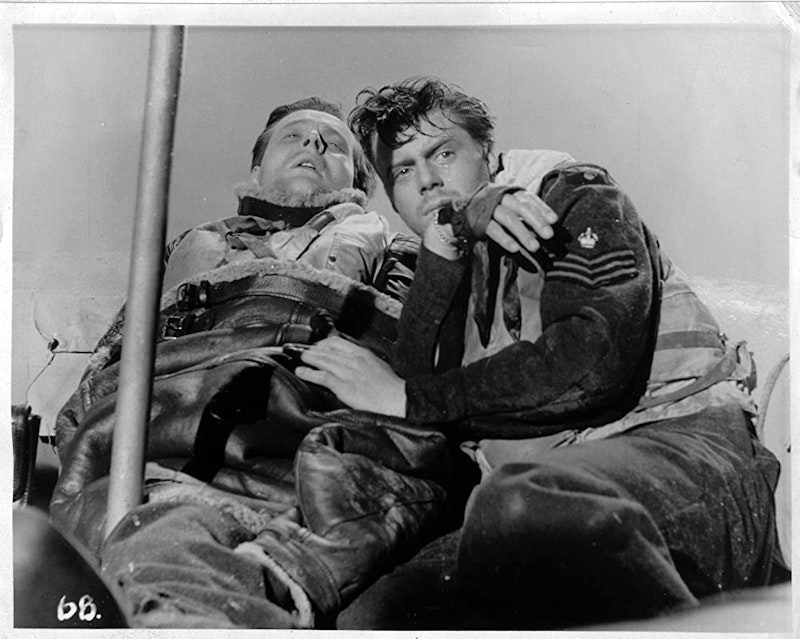 Dirk Bogarde was an actor known for his unsettling roles that conceal and illuminate the darkness people are capable of. Before he changed directions in his acting roles that involved nuanced views of human complexity, Bogarde starred in many British films that portrayed him as a charming and wholesome man, an idol to be worshipped by (mainly) female audience.

This isn’t to say Bogarde didn’t bring depth to the less serious and superficial roles he had. Two particular examples of this are The Woman in Question (dir. Anthony Asquith, 1950) and The Sea Shall Not Have Them (dir. Lewis Gilbert, 1954). Both contain the seeds of what we see later in Bogarde’s career precisely because he carried a unique form of intensity unlike any actor. (Both films as well as 10 more that span Bogarde’s career until the end of his life are currently streaming on the Criterion Channel as part of the Dirk Bogarde collection.)

The Woman in Question is a mystery drama, in many ways typical of other British films of that time and subject matter. It tells a story of a woman, Agnes Huston (Jean Kent), who, as the film opens, is found murdered in her apartment. As to be expected, a detective is assigned to this case, Superintendent Lodge (Duncan Macrae), and begins to question people who were most involved in Agnes’ life. These include a neighbor, Mrs. Finch (Hermione Baddeley), Bob Baker (Bogarde), whom Agnes meets at a carnival where she works as a fortune teller, Astra, Catherine, her sister (Susan Shaw), Michael Murray (John McCallum), a love interest, and Albert Pollard (Charles Victor), am elderly bird-seller who befriends Agnes but has a strange attachment to her.

These are the five people and “five angles on murder” (a title for the American release of the film), and in a series of flashbacks, we slowly uncover the motives for either love or hate for Agnes. But these aren’t just simple flashbacks but existential angles on how each character sees Agnes. Some, like Mrs. Finch, see her as a glamorous would-be Hollywood starlet, others, like sister Catherine, see Agnes as an almost destitute person, a woman who drinks and has too many men who call on her. Each person not only has a different version of practically the same events, but they also see Agnes in a way that suits their psychological needs. Agnes is a victim in every way, in both life and death.

The film also makes clever use of the unreliability of memory, and whether what we think we know truly is as we see it. The reality is distorted and everyone’s intentions have some kind of psychological and personal pay off. In a way, Agnes and the others that are connected to her are exchanging the roles of victim and perpetrator, which is a slightly different take on a traditional mystery.

Bogarde plays an actor who pretends to be an American but later, in a moment of honesty, reveals that he has never left the little corner of England he grew up in. His character arises suspicion, and this is partly due to the mixture of innocence and experience, to use William Blake’s expression, that Bogarde exhibits. His attractive looks lead one in, and in this role, he dominates even with the use of fumbling innocence. In some way, he stands out as an individual barely connected to anybody, partly because there are traces of pretense in his character.

By contrast, in The Sea Shall Not Have Them, Bogarde plays a soldier almost devoid of his personhood, mainly because the center of the film is the mission as opposed to the characters. The Sea Shall Not Have Them is a World War II thriller that focuses on the rescue mission of four pilots, Air Commodore Waltby (Michael Redgrave), Flight Sargeant Mackay (Bogarde), Sargeant Kirby (Bonar Colleano), and Flight Sargeant Singsby (Nigel Patrick) whose plane has been shot down by the Germans. The four pilots are stuck in the middle of the sea, while the Navy crews are searching the waters for them.

The action and the tension are built up in the movement between the Navy ship crew (that’s experiencing problems of their own) and ground headquarters as they work together to rescue the stranded pilots. The unifying force are the scenes with the pilots as they struggle to survive. Surprisingly, the film’s tension keeps the viewer on edge despite its chronological distance, and a lack of special effects that we’re used to as viewers. Although the film definitely has a patriotic element designed to elicit love for England, it still retains a sense of singularity thanks mainly to the uniqueness of actors that contribute a wide variety of idiosyncrasies (Anglophiles will be pleased to recognize many British character actors in the film).

The four pilots go through the expected descent of poor conditions. They’re hopeful that someone will rescue them momentarily, and so they energetically, almost like Boy Scouts, plan out their rations and approaches to this possibly deadly situation they’ve found themselves in. But as the hours and days pass, the pilots become haggard, hungry, and delirious (some more than others).

Bogarde plays Mackey in a way that makes him look unstable and indifferent to the entire war effort. By the end, he doesn’t care about the mission, or the suitcase containing military secrets that Michael Redgrave is desperately holding onto, or even life itself. While others maintain some level of honor and dignity, Mackey’s a questionable man, who has no attachments to anything. He’s losing energy and any possibility of valor as the hours on the floating device pass. Yet, at the same time, Bogarde portrays him as a man who should be understood and accepted for his faults because, after all, he does come around.

Although both The Woman in Question and The Sea Shall Not Have Them are films that don’t necessarily challenge cinematic perceptions and standards, we still see glimpses of the intricacy and complexity in Bogarde that will emerge in his later work, bringing forth multiple levels of existence and unique personality.