Mulling a probable apocalypse in the face of biblical signs: fallen idols, floods, and a plague. 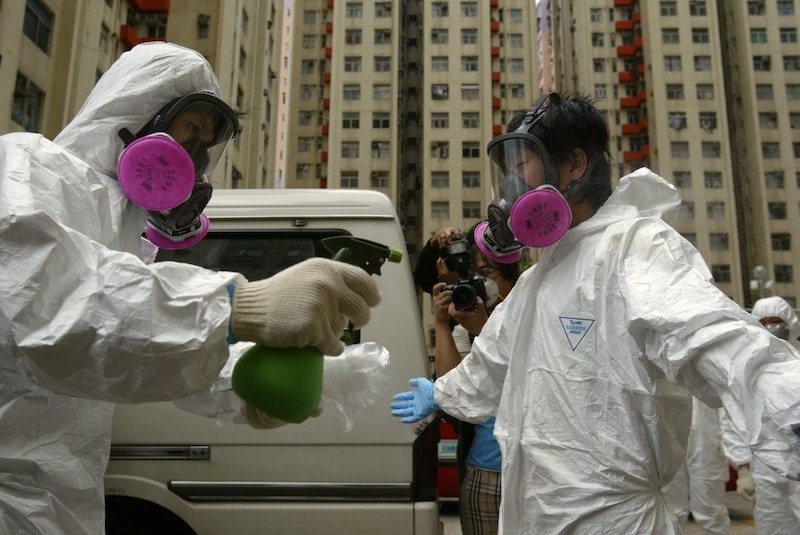 End of days? Should I become born again just in case? I don't want this coronavirus, I hate that it isn't even a proper noun. I don't drink but it's too appealing a name for a mysterious and deadly disease. But it's a faceless scourge, with (so far) anonymous victims. Most Americans aren't panicking about a still distant disease, but I bet everyone that flew in a helicopter this week probably thought twice about it. Whenever a celebrity as famous as Kobe Bryant dies a sudden, violent death, it’s a worldwide reminder of the Great Equalizer and its omnipresent and indifferent eyes. Someone that reached the height of their art and the industry of their art, eviscerated in a blink by bad timing and bad luck. I couldn’t help thinking about Carole Lombard, Patsy Cline, and Aaliyah... they all died in plane crashes right before or after major world events (Pearl Harbor, Cuban Missile Crisis, and 9/11).

Bryant’s death cuts through the din like an arrow. In a global village, no one can take in tragedy at scale. Only when it’s larger than life.

When I was writing this article, a 7.7 magnitude earthquake occurred right off the coasts of Jamaica and Cuba. Going on Twitter, there are plenty of maps and, for now, vacationers flippantly dismissing it. Who knows when the tsunami will hit? I’m flashing on the Indian Ocean earthquake at the end of 2004, when video recorded by people who ended up dead was broadcast on major networks. Footage of the mile-high waves coming, elderly couples washed away, everything falling and floating. This was approximately 9.3 on the Richter Scale, and it carried the news for a solid month after it hit on December 26, 2004. Even through the second inauguration of George W. Bush, the Indian Ocean earthquake was wrung like a towel for unaccountable news organizations to milk more trauma porn for an audience trained to tune out anything but spectacle.

A celebrity helicopter crash, mile high tsunami waves, and the coronavirus epidemic are all visible, tangible, even cinematic visions of apocalypse. It’s all biblical: idolatry, the great flood, a plague. One doesn’t have to look hard on the Internet to find people contorting recent events to the Chinese Zodiac, pointing out that the incoming Year of the Rat obviously brings disease, but after crisis, “renaissance.” I’ll hold my breath on politics for a few weeks, equal parts superstition and exhaustion. There really isn’t anything left to write about with regard to the Democratic primary, it’s in “hurry up and wait” mode. I have knots in my stomach, but no Iowans are to blame.

Coronavirus of course reminds me of SARS, an epidemic coming so soon after 9/11 and simultaneous with the start of the never-ending Iraq War, an epidemic that never became a pandemic but certainly felt like the second coming of Spanish Influenza. That’s the apocalypse I fear the most, and it’s the one that’s the most likely and most quotidian. It’s a miserable, slow genocide driven by disease. Stephen King never wrote a scarier book than The Stand, because its vision of an America decimated by disease and what that world would functionally be like for survivors is not only believable but also plausible. King’s plague had no mercy, and killed its victims slowly and painfully: bloating, foaming, jaundice, derangement, not to mention highly contagious. What would people dependent on medication do once their Klonopin, Lexapro, Lipitor or insulin runs out and the militia running your “sector” already raided every pharmacy in the area? And what about any hope for the future? Medication production would stop, even if one had stocked up a doomsday stash, it would run out eventually. Probably faster than one would imagine given the extraordinarily stressful circumstances of living through an active, world-halting apocalypse. Not fun! As our President would say, “Believe me it’ll be... very bad, not good for you.”

Who wants to live in a world like The Road? Not many, but those that actually want or merely fetishize a plausible apocalypse would not survive long at all. They'd have fun shooting zombies or aliens or infectious people or holograms, and they'd get tired and lazy. "Normal people" thrown into extraordinary cirumstances beyond their control, especially with children, will walk through fire if they think it means their family's survival. When the world ends, no one will enjoy remaking it.