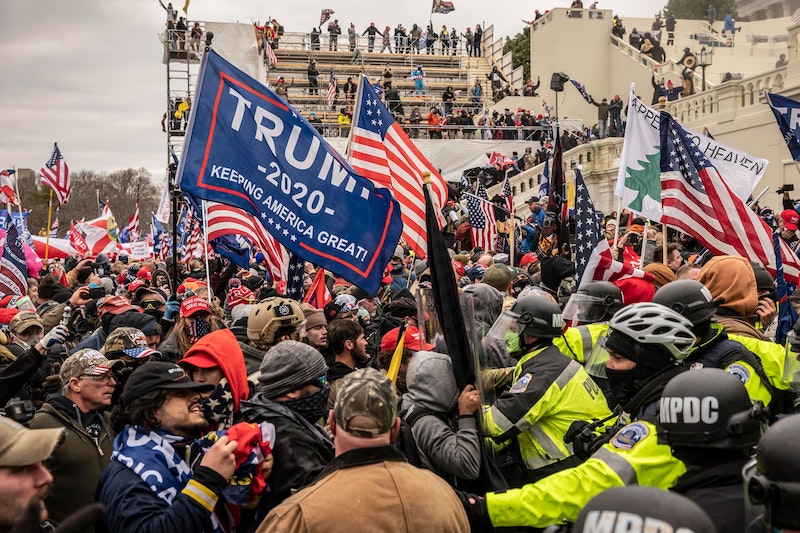 I get the sense there's soon going be a massive glut of documentaries about the different intersections of right-wing extremism, hate groups, and the January 6 Capitol insurrection. One of the first is American Insurrection, that debuted this week on PBS as part of the Frontline series. Directed by Richard Rowley, American Insurrection is a collaboration among Frontline, ProPublica, and Berkeley Journalism’s Investigative Reporting Program.

ProPublica did groundbreaking work in the aftermath of January 6, assembling more than 500 videos of the insurrection —most of it collected from the participants' Parler accounts—that formed a narrative of what happened that day. So when I heard a documentary called American Insurrection was on the way, with ProPublica involved, I assumed it was an extended version of that.

In fact, it’s not that at all. The insurrection itself is only depicted for a few minutes near the end. Instead, the film follows correspondent A.C. Thompson as, in the years between the deadly Charlottesville rally and the Capitol riot, he investigates different right-wing extremist factions, and the threats they pose. The documentary, while not without information or value, is somewhat dry, and doesn't contain any major new revelations. The overuse of spooky music doesn't help either.

If you're looking to parse the various nuances of how the Proud Boys and the Rise Above Movement are different from the Boogaloo movement, or how close these different groups come to the lines of "Nazi or not Nazi" and "genuinely dangerous or cosplaying trolls," American Insurrection is for you. But it's not likely to go down as one of the better docs on this subject.

Rowley’s a prolific documentary filmmaker who’s directed Dirty Wars, 16 Shots, and Kingdom of Silence, which dealt respectively with U.S. military perfidy, a terrible police shooting in Chicago, and the murder of Jamal Khashoggi by the Saudi regime. But the main voice here is not the director but rather Thompson, the ProPublica reporter.

In addition to some extremism experts, he interviews people associated with the different movements and organizations, with histories of varying degrees of violence and proximity to full-on Nazi ideology. Too many are former or active duty military. More than one of the interviewees openly call for violence on camera, while one lady, associated with those who plotted to kidnap Gov. Gretchen Whitmer, keeps up the Kid Rock tradition of flying a Confederate flag despite living in Michigan.

There's some explanation of how the Boogaloo movement, with its esoteric politics and willingness to attack law enforcement, differs from the more solidly pro-Trump factions. There's also talk of how many people from these different movements ended up in Washington on January 6 as "Trump's costumed piglets," as my friend John-Paul Pagano memorably called them.

The timing of American Insurrection is unfortunate, coming so soon after the conclusion of Cullen Hoback's Q Into the Storm. That six-part HBO series about the QAnon cult settled into a groove of exploring the unique pathologies of a small coterie of deranged goofballs, with the added benefit of successfully solving the mystery of who Q is.  (QAnon isn't a subject of American Insurrection.)

Hoback's series had more of a voice and point of view than the PBS doc, and pulled off a journalistic coup. While it’s hard to blame Rowley, Hoback ended up with much more compelling interview subjects. That was also the case with Daniel Lombardo's White Noise, from 2020. That film kept the focus on three specific people, and hung them with their own words. Another 2020 doc, Feels Good Man, homed in on the specific story of the guy who created Pepe the Frog, and his fight to reclaim a character from the clutches of some of the world's worst people.

Then there was Vice's chilling documentary from 2017 about Charlottesville, in which journalist Elle Reeve interviewed the "crying Nazi" Chris Cantwell. That was a better version of what American Resurrection was attempting.