The Devil is a Woman (1935) was Marlene Dietrich's favorite of the seven movies she made with Josef von Sternberg, but it was also the last. 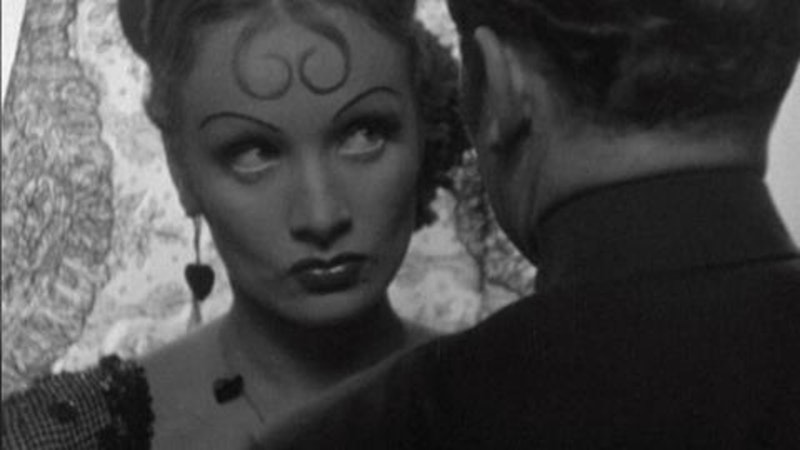 The seventh and last film collaboration between Josef von Sternberg and Marlene Dietrich, The Devil is a Woman (1935), is an elaborate display of further developed abstraction in cinema. The film not only concludes this strange and beautiful collection but also the tumultuous relationship between von Sternberg and Dietrich.

Although it’s supposed to take place in Spain at the turn of the 20th century, there’s hardly anything Spanish about it. Just like in The Scarlet Empress (1934), which takes place in Prussia and imperial Russia, von Sternberg isn’t so much concerned with geographic and historical accuracy as with the artistic process. In this case, Dietrich becomes an even bigger abstraction of her persona through the use of various methods and objects.

Dietrich plays Concha Perez, and much like Shanghai Lily, the “notorious coaster of China,” she’s Spain’s notorious heartbreaker. The film opens with an exuberant and exaggerated masquerade reminiscent of the masked celebration in Dishonored (1931), but this time, von Sternberg’s vision has crossed into madness that’s even further removed from reality than The Scarlet Empress. The masques, the noise and endless reams of paper and confetti that almost tie the revelers into knots are confusing and disorienting.

In the midst of it, a figure emerges—Antonio Galvan (Cesar Romero)—who’s on the lookout for the next female conquest. He spots Concha Perez, who lures him into her home, only to give him a note that they should meet later at a different location. While he waits for that time to arrive, Antonio, is at a restaurant and runs into a friend, Captain Don Pasqual Costelar (Lionel Atwill). Their casual chit-chat turns dark when Pasqual learns that Antonio’s about to have a secret meeting with Concha. He warns him to stay away from her because she’s nothing but trouble and it turns out that she has caused great ache for Pasqual himself.

At this point, we see the use of a flashback, which was generally unheard of in cinema. Von Sternberg purposely moves the plot backwards and forwards for an effect as the audience is trying to piece together the seemingly separate personalities of Concha from the past and Concha from the present. Pasqual too is a cinematic object of curiosity because it’s not entirely clear whether the original seduction Concha enacted has had any later effect.

This initial seduction didn’t happen only once. As we find out from Pasqual’s storytelling (the intent of which is still unclear: is it a warning or an attempt to dissuade Antonio from further pursuit for his own benefit?), Concha has repeatedly used him but it’s unclear why he’s let it happen. It’s the money that Concha is concerned with, and becomes clear is that she’s willing to go to any lengths to get it, as she moves from one lover to the next. Despite the fact that she promised herself only to Pasqual, she continues to act as a free subject with no regard to Pasqual.

In this sense, there’s a great similarity between Dietrich’s Concha and Dietrich’s Lola Lola in The Blue Angel (1930) in which she has utter disregard for Professor Immanuel Rath, yet he keeps coming back for more heartache. These affairs of the twisted heart don’t have to be explained since human beings tend to become mad and intoxicated with the wrong kind of love and obsession. In The Devil is a Woman, von Sternberg isn’t obligated to explain why Pasqual keeps coming back for more abuse and neglect because it doesn’t conceal or illuminate the film or any other Dietrich/von Sternberg collaboration.

So, who has the power? Can Pasqual control Concha at all? In one scene, their verbal fight escalates. Pasqual physically beats Concha, and we know this particularly from the sounds heard through the shutters. This sadomasochism runs through the film, and there’s no doubt that this was one of the elements of the relationship between von Sternberg and Dietrich (while filming Blonde Venus, Cary Grant said that their sadomasochistic relationship was getting in the way of production and created many awkward and strange moments, which Grant tried to stay away from). The facial similarity between Lionel Atwill and von Sternberg is almost frightening. While in Morocco (1930), Adolphe Menjou’s similarity to von Sternberg was calm and collected, Atwill’s is that of a man obsessed with possessing Dietrich’s Concha. He’s strange and metaphysically disfigured.

Cinema becoming metaphysics is what differentiates von Sternberg from other film directors. It’s not only actors that become disfigured, but also the state of mind as well. Is von Sternberg clutching to the last hope that Dietrich may not slip away? Is it his cinematic genius that keeps him together through this process, and thus, he continues to wield his power over Dietrich? In the end, that power’s gone. When all of the mad particularities about von Sternberg and Dietrich are long gone, we’re left with a concealed and illuminated expressionism. Dietrich’s forever captured in her eroticism, even, or perhaps, especially after death. All that remains is Art.