Kurt Warner's true story is so compelling, that it keeps American Underdog from being head-scratchingly bad. B- 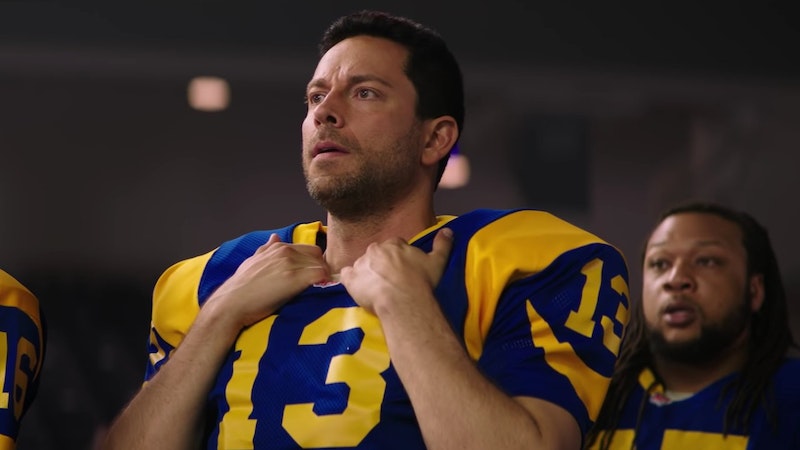 When it comes to real-life American sports stories from the past 25 years, it's hard to think of a better one than that of Kurt Warner. A quarterback who played at the non-powerhouse of Northern Iowa, Warner wasn't picked in the NFL draft and spent years knocking around training camp rosters, and at one point working in a grocery store. After a stint in the Arena Football League, Warner signed in 1998 as a backup with the St. Louis Rams. The following year, after an injury to starting quarterback Trent Green, Warner stepped into the lineup and suddenly became the best quarterback in the game, leading the Rams to a Super Bowl win after the 1999 season. And the Rams' win in Super Bowl XXXIV had the most dramatic finish of any Super Bowl in history.

Warner went on to play in two more Super Bowls, and is a Hall of Famer, the only player who's in both the Pro Football Hall of Fame and the Arena Football Hall of Fame. Now he’s the subject of a biopic, American Underdog, which comes out in theaters Christmas Day. The film combines the well-worn formula of inspirational fact-based sports movies like Rudy, Miracle, Remember the Titans, Invincible, and The Blind Side, while also sprinkling in some trappings of the faith-based genre.

The result is a cornball movie, but I didn't hate it. Directed by Andrew and Jon Erwin, whose background is mostly in the Christian films, American Underdog stars Zachary Levi as Warner, while speeding through much of his life story. The film also focuses heavily on his courtship of, and eventual marriage to, his wife Brenda (Anna Paquin), a single mother of two and military veteran four years his senior. (The Warners are executive producers, and the film depicts their love story with wholesome, syrupy affection.)

The film mostly follows the template of other sports films of the genre: Warner’s an underdog, coaches and other authority figures don't believe in him, and he faces numerous setbacks. Eventually, boosted by faith and family, he gets his chance, first in the Arena league—where his Iowa team played its home games in a rodeo venue—and later in the NFL with the Rams. There, his coach was Dick Vermeil (Dennis Quaid).

It treats a quarterback staying in the pocket as a little-known secret to football dominance, the way The Blind Side extolled left tackles protecting the quarterback's blind side.

The film's structure is its greatest mistake. It approaches Warner's quest the way Rudy and Invincible did: The goal isn’t to win a championship or be the MVP, but rather to just get in the game. But Warner, unlike Rudy Ruettiger and Vince Papale, did more than that.

Ever since this film was announced, I assumed the Big Game at the End would be Super Bowl XXXIV. But it's not—the big game is Warner's NFL debut. That entire Super Bowl season, including the Rams' victory, is seen in a concluding montage, robbing us of a look at the Greatest Show on Turf, one of the NFL's most exciting eras.

And then, somewhat inexplicably, the film omits the iconic final play of that Super Bowl, when the Rams' Mike Jones made a tackle on the two-yard-line to stop the Titans from scoring and ending the game—even though we'd already seen Warner's AFL team lose a championship game on a nearly identical play.

American Underdog also doesn't show us the fascinating arc of Warner's entire NFL career, in which he was left for dead more than once, before he reached another Super Bowl with the Arizona Cardinals in 2009. What’s also strange is the film’s treatment of Mike Martz, the Rams' offensive coordinator in that '99 season. Martz is played by character actor Chance Kelly, and is depicted as a manipulative psychopath who motivated Warner through withheld affection and mind games, before proclaiming him ready to star in the NFL once he passed all those twisted tests. The concentration on this, among other weird stuff, serves to sideline what should be an important relationship between Warner and Vermeil.

Warner's true story is so compelling that a movie about it was perhaps inevitable. That strength is enough to keep the film from being all bad, but some of its choices are just head-scratching. What I would love to see is a biopic of the other starting quarterback from that Super Bowl, Steve McNair, including the part about the double life and the mysterious murder, likely at the hands of his mistress. That would take a notably different tone than American Underdog.