Swan Song doesn't interrogate any of its provocative subject matter. 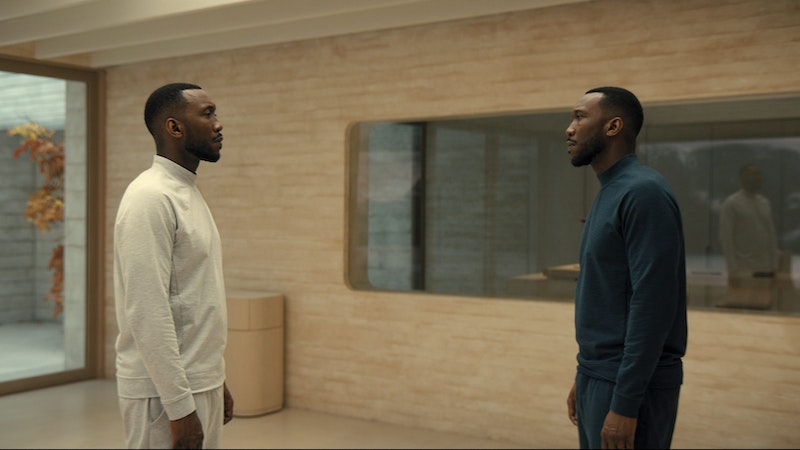 What would you do if you were dying and didn’t want to leave your loved ones behind suffering from grief? What if you could clone yourself, and that clone would have your full consciousness and subconsciousness, yet no memory of being a clone? Your family would go on without ever knowing the truth of your death, and they wouldn’t feel any grief or sorrow. You could die knowing they’d be happy.

This is the story behind a new film, Swan Song, directed by Benjamin Cleary, now streaming on Apple TV. It takes place in the future, and Mahershala Ali plays Cameron Turner, who has terminal illness. The end is nigh, and it’s not pretty. He has a wife, Poppy (Naomie Harris), and a young son, with another child on the way. He’s kept his illness a secret from Poppy, and in the meantime, has engaged the services of a clinic that specializes in human cloning. The director is Dr. Scott, played by Glenn Close.

The clinic is located in a beautiful place, surrounded by a lake and woods. It’s a serene and tranquil, yet its futuristic setting is divorced from humanity. Dr. Scott is warm and kind but underneath she’s more interested in creating more clones than helping people navigate their grief and pain. One gets the impression that Dr. Scott’s focus on pure science of such an undertaking is synonymous to the notion of compassionate help, much like it’s present in assisted suicide clinics. At first, she appears to be guiding Cameron through the process where he controls the outcome. However, there are instances where it’s clear that Dr. Scott’s mission is to complete the process of cloning and transfer.

Cameron’s conflicted. He doesn’t know if he’s making the right choice, but time’s running out. He lies to Poppy about going away on a business trip, while undergoing a series of procedures to make the final switch and release the cloned Cameron. But time’s running out. He could die at any moment. If Poppy and his son witness his death, then the experiment is useless.

We witness a series of flashbacks on how Cameron and Poppy met, some troubles in their marriage due to an untimely death of Poppy’s brother, Andre, and the joy and anxiety of expecting another child. They live fairly comfortable life. Setting aside the economics of the experiment, the subject matter of Swan Song naturally yields many questions concerning the ethics of human cloning.

Should humans be commodified in such a way? Isn’t there human singularity and soul, which can’t be cloned or replaced? Why are we afraid of death, and more importantly, are we making man the measure of all things, or do we have even a shred of awareness of the sacred that makes us question cloning?

Although visually well done, Swan Song doesn’t ask any of these questions. Except for a brief moment, in which (through a flashback) Cameron, Poppy, and Andre discuss whether they would clone themselves, there are no other instances where a deeper reality of such an act is discussed. I don’t expect a dry, philosophical treatise on the morality of human cloning, in which Glenn Close presents a lecture to the audience. However, the opportunity for explorations was never taken. Close, who’s an actress of immense talent, appears to unchallenged, and thus didn’t really rise to bigger heights simply because her character wasn’t given any depth.

Ali and Harris offer good performances, but the film is maudlin and sappy. Cameron and Poppy are always crying about one thing or another. He’s emasculated and unable to make any choices, and Poppy spends a lot of time comforting him. Cameron’s dealing with his illness alone, struck with sadness that he will die. He has convinced himself that the best path is to not cause any suffering for Poppy and his son.

Although Cameron’s intention is not without merit or even love, this long goodbye has no meaning, except to say he made that final choice. The story progresses slowly into nothingness. There’s no conflict or even a mention of fate. What would have made the film more intriguing is if Cameron’s clone died shortly thereafter, say, in an accident. This would call into question the idea of predestination and whether one’s moment of death is already decided. In turn, this then follows yet another thread of questioning: whether God exists and what our relationship to God is, especially when we think of death?

The story concludes neatly. Cameron’s clone made it through the transfer process, and Poppy’s blissfully unaware. The clone is indistinguishable from Cameron, yet that’s not entirely true. During the process of transformation, the clone (whom they call “Jack”) is singularly different. Cameron and Jack fight over who’s the real Cameron, and Jack has some strong opinions about Cameron and Poppy’s marriage. We could conclude that this is another side of Cameron’s consciousness speaking, but the difference between the two men goes beyond the idea of split or conflicted personality.

One of the biggest flaws of Swan Song is there’s no authentic questioning that might emerge from a character like Cameron. It’s as if the makers of the film were afraid to delve into those questions. Cloning deserves to be explored carefully. We have to ask what it means to be a human in the first place. Swan Song has an excellent cast and rich subject matter, yet, just like Cameron, fell accidentally into milquetoast choices.