Some of the most powerful scenes are genuinely horrific. 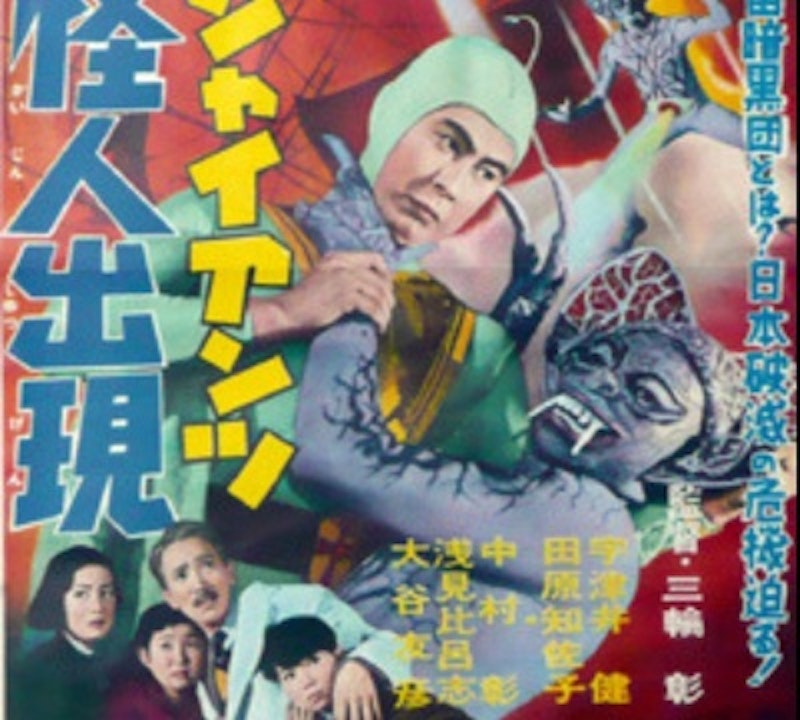 The consequences of violence are dominant in post-War Japanese film. On the highbrow side, Kurosawa's films, Akira and In The Realm Of The Senses presented complex dramas revolving around the relationship between perpetrators of violence and their victims. On the lowbrow, side sci-fi fantasies like Godzilla, Attack Of The Mushroom People, and Suicide Club exploited the fears of the first society ever to face total instantaneous destruction. Evil Brain From Outer Space belongs to lowbrow Japanese cinema, but there's a lot more to this unique film than what's described by its cartoonish title.

Evil Brain From Outer Space came out in 1965 even though it wasn't originally a movie at all. Its footage first aired piecemeal in hour-long episodes that formed part of the late-1950s super hero TV series Super Giant. Years after Super Giant stopped running in Japan, multiple episodes of the show were re-edited together as several feature-length films. These were shown worldwide in low budget movie theatres and on TV. When Super Giant's adventures finally came to the U.S. the hero's name was changed to Star Man due to its similarity to Superman. The name change also highlighted the character's sci-fi background story.

Stoic actor Ken Utsui plays the lead role. The Bob Dobbs-ish Utsui grimaces authoritatively through a clusterfuck of death-defying action sequences clad in a wacky outfit that bears hilarious resemblance to the glittery spandex get-ups worn by Will Ferrell and Jon Heder in Blades Of Glory. Star Man lives on The Emerald Planet; the hero possesses superpowers of all kinds, and serves a U.N.-like council of diplomats who represent his home world. These boxy, awkward looking characters employ Star Man as a peacekeeping force to fend off intergalactic super villains. The opening scene of Evil Brain illustrates this connection. It's soaked in a stoned dadaistic atmosphere that sets the film's tone of non-stop weirdness.

The "Evil Brain" of the film's title is a glowing preserved brain that once belonged to a deceased mad scientist named Balizar. This living organ travels from the planet Zemar to conquer Earth with the help of two corrupt nuclear bomb-making Earth scientists and a creepy militia of synthetic mutations. The bulk of the film presents Star Man's frantic struggle to hunt down Balizar and its allies.

Some of the most powerful scenes in Evil Brain From Outer Space are genuinely horrific. They feature Balizar's menacing femme monster, a witch-mutant whose very touch transmits an infectious disease that kills instantly. The hag's beady eyes peer out through globs of Kabuki make-up. Hovelling along sluggishly, she attacks in silence while contorted into a pose that recalls a germ-ridden body at death's door.

There's a breathtaking agility displayed in the film's battle scenes. Actors and stunt performers are thrown into the air and knocked about like bowling pins all over Balizar's cavernous lair. The spectacle teems with tricky camera angles, kung fu, and Star Man's trademark backflips. With a whirlwind pace and strobe blasting light design it all looks more like a 1980s new wave dance party than any macho brawl.

A major ingredient that sets Evil Brain apart from other sci-fi super hero hybrids is its manic versatility, the obvious byproduct of the fact that no less than three different directors and a battalion of unit directors and assistant directors crafted this chaotic pastiche. One moment this is a heavy drama dealing with political intrigue, power struggles, and nuclear paranoia. The next minute it's kid-friendly fluff in the vein of the U.S. Batman TV series. Then all of a sudden it's an arty low-budget horror flick like what might happen if the young George Romero collaborated with Sid & Marty Krofft.

Give high technology to an egomaniac and you get a nightmare like Balizar whose lust for power can cause a global nuclear disaster. This plot point makes Evil Brain a historical artifact that reflects the neurosis of post-World War II culture. No matter how kid-friendly, hallucinogenic, and light-hearted it is, even a ridiculous super hero movie can be haunted by the ghosts of Hiroshima and Nagasaki.