Death in Venice (1971) is one of Dirk Bogarde's greatest performances. 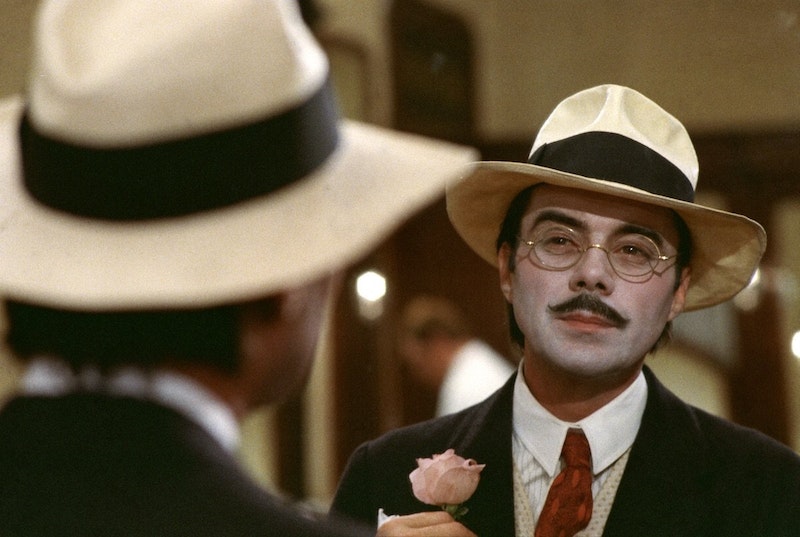 Luchino Visconti’s Death in Venice (1971) opens with painterly images of the Adriatic Sea. Sounds of Gustav Mahler’s Fifth Symphony become part of the landscape, as a worn-out German composer, Gustav von Aschenbach (Dirk Bogarde) sits somewhat impatiently in the boat. The sights of Venice are mystically emerging through the gray sky, and Aschenbach smiles contentedly. The interior anxiety, however, remains on his lips and his sullen, sickly face. Tragically, it will remain throughout the film.

Aschenbach is a weak man, both physically and spiritually. His physical ailment and fatigue are what drives him to take a restful holiday in Venice. But inner troubles follow him from native Munich to Venice. He’s easily distracted and thrown off by his surroundings. His irritations are not comedic but neither do they elicit compassion from the audience. At the beginning of the film, Aschenbach is a member of the upper class, a man who is trying to hold his dignity, and who demands perfection from the hotel staff. He demands respect but he rarely commands it.

He’s visibly bored, and the outbreak of cholera (which the authorities are trying to keep secret) isn’t helping. Restlessness and acedia have descended upon him as he sits in the hotel lobby and fiddles with the newspaper. But then, a vision appears that leads to his first bout of ecstasy. A Polish adolescent boy named Tadzio is with his mother and siblings, and Aschenbach is woken from his torpor.

Tadzio is classically beautiful. Physically inhabiting the body of a boy who’s turning into a man, he’s both feminine and masculine, and yet genderless. He’s like a marble sculpture, a Greek god. In Thomas Mann’s 1912 novella which the film was based on, we witness the interior thoughts of Aschenbach. Describing Tadzio’s thoughts of this vision, Mann writes “…there, like a flower in bloom, his head was gracefully resting. It was the head of Eros, with the creamy luster of Parian marble, the brows fine-drawn and serious, the temples and ear darkly and softly covered by the neat right-angled growth of the curling hair.”

While Mann’s novella is focused on Aschenbach’s relationship to the idea of Platonic Beauty, Visconti takes a different approach. It’s not clear whether Visconti intended it in such a way but we see Aschenbach emerging as a weak predator. He follows Tadzio and his family everywhere, creeping along, trying to get a glimpse of his immovable beauty. Aschenbach is trying not to give in to his base desires. After all, he’s a music composer who demands perfection in his work. Not only that, he demands morality in art as well. But all of that comes crumbling down when his obsession with Tadzio becomes unbearable.

Venice is a city whose geography lends itself to being explored in an absurd and deviant way. Paul Schrader’s The Comfort of Strangers (1990) and Nicolas Roeg’s Don’t Look Now (1973) are some of the examples of Venetian mysticism that seduces people into transgressive behavior and ultimately, destruction. Here, too, Visconti leads the way to Aschenbach’s failure as a human to keep it together, even as he’s trying to remain dignified.

Echoing Venice’s oppressive weather and the impending arrival of sirocco, Aschenbach is afflicted by the unbearable thought of mortality. He doesn’t want to grow old and Tadzio’s presence makes these feelings more palpable. It’s as if parts of Venice are juxtaposed to the appearances of Aschenbach and Tadzio. The dirtiness and griminess of choleric Venice is enveloping Aschenbach, while the sun’s rays and the glistening sea are expanding the youthful beauty of Tadzio.

Aschenbach wants to drink from the fountain of youth, and feebly (like all of his attempts at life) visits a beauty parlor, where he colors his hair and adds make-up to his lips and skin to make himself look more alive, and not like a living corpse. But he looks even more foolish. An old and selfish man clinging to some idea of beauty, Aschenbach persists in holding Tadzio captive with a perverted sense of eros.

Bogarde’s acting range here is on full display. To be able to play the sadistic Hugo Barrett in The Servant (1963) and a pathetic weakling Gustav von Aschenbach is a testament to his ability and openness as an actor, whose main concern always was the presentation of art. Small facial gestures that reveal pleasure and pain, insecure body movements that reverberate in his own metaphysical realm, and the blurry line between victim and predator are all part of Bogarde’s methodology and submersion into the role of Aschenbach.

After his beauty treatment at the salon, Aschenbach proudly goes to the beach. Here, he sits in on the beach chair that’s digging into the dirty sand. The heat is becoming unbearable, and the hair color begins to drip down his face. Does he have cholera or is he afflicted by beauty? He’s fighting for his life as he pierces Tadzio with his gaze. It’s a gaze of a weak man whose intentions are anything but honorable.

Aschenbach is enjoying the vision of the masculine and feminine body of Tadzio who’s wrestling with another boy. Visconti’s obvious obsession with homoeroticism that we find in The Damned (1969) is visible here as well. In this case, it’s not Helmut Berger who’s the object of homosexual desire but Björn Andresen who plays Tadzio. The playful yet sexual wrestling match turns ugly when the older boy throws Tadzio to the ground and pushes his face into the muddy sand. Aschenbach is disgusted and this aversion turns into real agony. His face is dripping with sweat and hair color, the skin under his eyes is dark and lifeless. He seems to want to help Tadzio but can’t bring himself to get up. If indeed it was the supposedly inherent morality in art that has driven his being all this time, he would’ve helped Tadzio. Instead, he remains motionless, stuck in self-induced lethargy because to him, Tadzio is not a human, but an erotic object. Tadzio has no subjectivity or interiority because Aschenbach (read: Visconti) treats him in such a way.

But it’s Tadzio who retains the power all the way to the end. As Aschenbach draws his last, pathetic breath, Tadzio’s figure is bathed gracefully and gleefully in the Venetian sun. The damp clouds have lifted, the blue sky is emerging. Tadzio remains untouched by Aschenbach in every way. He remains the personification of Beauty that has annihilated Death.