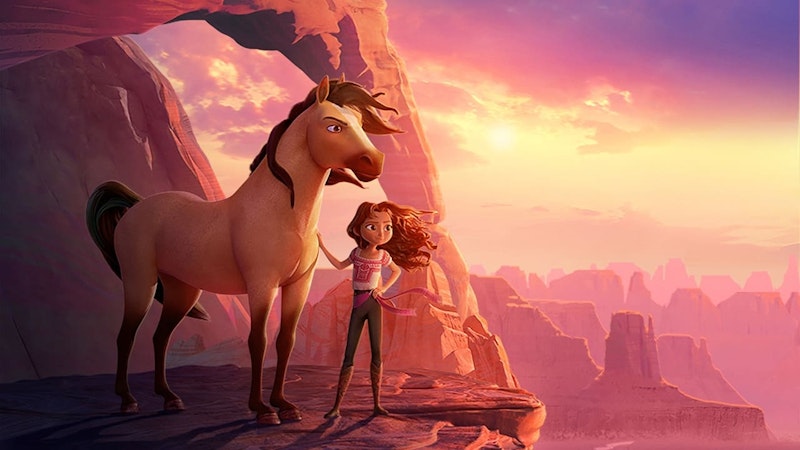 Spirit Untamed is a DreamWorks Animation release, and the sequel to a nearly 20-year-old movie, 2002’s Spirit: Stallion of the Cimarron. It’s also more of a direct adaptation of Spirit Riding Free, an ongoing Netflix cartoon series. It arrives in theaters with minimal buzz and promotion. And it's unexpectedly delightful. The film was directed by Elaine Bogan and co-directed by Ennio Torresan Jr., and produced remotely during the pandemic. It tells the story of a teenaged girl befriending a wild horse, reconnecting with her father, and ultimately coming to terms with the long-ago passing of her mother.

Original subject matter for a big animated movie, this certainly isn’t. But the filmmakers make the most of it, with beautiful animation, some thrilling action sequences, and contributions from a strong group of voice actors.

Spirit Untamed is set in what appears to be the 19th century, in the American frontier, although all of the place names are fictitious. It's the story of Lucky (voiced by Isabela Merced), the daughter of a famous rodeo performer (Eiza González) who died right in front of her when she was young. Raised ever since in privilege, as the granddaughter of a robber baron/candidate for governor, Lucky is sent to live with her long-estranged father (voiced by Jake Gyllenhaal), who lives just steps away from a horse corral. The overqualified voice cast also includes Julianne Moore as Lucky's aunt and Andre Braugher as the owner of the horse corral.

Lucky befriends the titular horse, and along with new friends (Marsai Martin and Mckenna Grace), goes on an exciting adventure to rescue Spirit and his family from villainous horse wranglers (led by Walton Goggins)—a plot point with subtle allegorical similarities to Trump-era family separation policies. A film like this won't work unless it makes us care about this girl, her horse, and their friendship, and this pulls it off, even though the horse, in this universe, can't talk.

It's not up to the level, creatively, of Pixar's 2020 one-two punch of Onward and Soul, and it's going to be followed by this year's Pixar entry, the Disney+ exclusive Luca. But it's a surprisingly strong animated entry from DreamWorks Animation.

Plan B, now streaming on Hulu, is another revisionist teen movie, with a plot that's a pastiche of elements from a few films from the last five years, including Booksmart, Blockers, Never Rarely Sometimes Always, and Unpregnant. Like Booksmart, Plan B features a duo of nerdy female teen outcasts, and their plans to party and (maybe) get laid. Like Blockers, the film is frank and unapologetic about teen female sexuality, and sides with the teens over their overprotective parents. Like Never Rarely and Unpregnant, it dramatizes a road trip by the two friends, who live in a conservative part of the country, where sex education and access to reproductive health care are outrageously inadequate.

Directed by Natalie Morales (the actress, not the NBC News anchor), Plan B is most comparable to Booksmart, with the key difference that its screenplay is much funnier than that enjoyable but mostly laugh-free film. And while its tone is radically different from that of Never Rarely, Plan B has political points to make, without ever feeling like a smug lecture.

Plan B stars Kuhoo Verma and Victoria Moroles as Sunny and Lupe, best friends living in a small South Dakota town. Sunny is a bookish Indian-American, while Lupe is a wild child. There's a big party, an unfortunate deflowering, and before long the two friends are on the road, looking for the emergency contraceptives. The screenplay, by Prathi Srinivasan and Joshua Levy, is funny in the dialogue, the character beats, and the comedic set pieces, including an especially memorable one involving a piercing. A lot of the jokes are specific to the experience of being a South Asian in South Dakota, and how the "Indian Mafia" (personified in one scene by Broken Lizard's Jay Chandrasekhar as a pharmacist) is always ready to spread gossip.

There are also a half-dozen memorable cameos, the best of which is The Righteous Gemstones' Edi Patterson, telling a story about what happened to her husband that just about had me on the floor laughing. Is it shocking anymore for a Superbad-style movie to feature teen girls? Not really. But Plan B takes the formula in some hilarious, and thought-provoking directions.