Everyone speaks quickly, quietly, and tells lies in House of Games (1987). 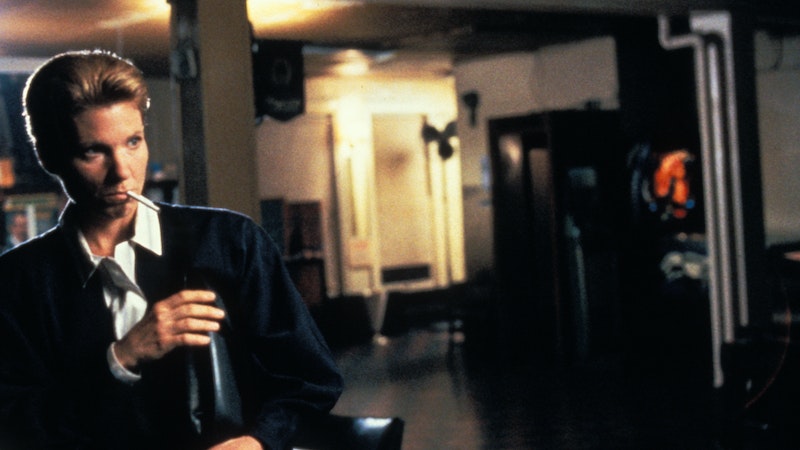 It’s not bad for an institution to have quirks, if they reflect a human element: something inherited from an individual who shaped the institution, say. Thus the Criterion Channel, which has twice hosted David Mamet’s 1987 directorial debut House of Games, most recently as part of the “Frame of Mind” collection of films about psychiatry. It’s an odd choice of film to spend so much time on the Channel, not an outstanding movie; no surprise that when Criterion staff members picked one film each to recommend from the Channel, House of Games was chosen by Peter Becker, President of Criterion since 1997. Everybody has their personal favorites.

The movie’s very Mamet, not only in direction but in the script Mamet co-wrote with Jonathan Katz. So it’s about betrayal and bad men and the threat of violence and people doing nasty things; solid dramatic stuff, filmed in an effective if slightly dated style. But it’s too facile in its plot, too simple in its themes. It engages with psychological theory only superficially. And the point of the movie is that a psychiatrist understands less about human nature than a con man.

The movie follows Margaret Ford (Lindsey Crouse), a successful therapist with a new self-help book climbing the bestseller list. She gets involved in the case of a patient who owes a massive gambling debt to local low-life Mike Mancuso (Joe Mantegna). She tries to convince Mancuso to cancel the debt, but gets roped into helping him in a high-stakes poker game. Things don’t go as predicted, but Ford’s fascinated by Mancuso’s world of larceny and con games. Driven by more than professional motives, she convinces him to show her the ropes of his profession, and inevitably things go horribly awry.

The dialogue’s solid, but the acting’s highly stylized. It’s clearly a directorial choice; every performer underplays their part, eschewing naturalistic readings for over-neutral line deliveries. You watch actors speaking too quickly, without emotion, and they feel less like characters than the idea of characters. It’s hard to say what the point’s supposed to be, but at least it’s distinctive.

Perhaps the idea is to make it harder for the audience to see through the deceits and guess who’s lying at any given time. If so, it doesn’t work. The big problem of House of Games is that it’s too easy to see what’s happening all the way through. It feels as though there’s a twist missing, some complication somewhere in the late second act that would give the film something unexpected, something not obvious.

As it is, there comes a point where Ford, a character we’re encouraged to see as intelligent, thinks she has no choice but to give a man she knows to be a con artist a large sum of money. Yet somehow she has no suspicion that this just may be a swindle, despite having seen up close how elaborate cons work. And despite having had Mancuso explain the psychiatry of cons to her in detail. You wonder if Ford’s running a con of her own; but no.

Mamet’s commentary on the film makes it clear he has no use for psychiatrists, and it’s a fair point that an academic analyzing bad behavior isn’t going to see that behavior as clearly as somebody who lives that world from the inside. But it’s difficult to imagine Ford so entirely lacking in critical faculties that she doesn’t see red flags as events unfold. She does eventually work out what’s happening, but mainly through dumb luck; coincidence comes to play a large role in the film, and the story to feel correspondingly loose.

We don’t see Ford demonstrating any insight or presenting any ideas beyond simple self-help verities. There are hints that she’s had issues with her father, but they don’t cohere with the rest of her story. This is a problem for the film overall: interesting moments and insights don’t connect to an overall theme. Mancuso’s description of the psychology of the con is nicely handled as dialogue, but doesn’t inform the dramatic structure of the film.

Which isn’t to say it’s not entertaining. The dialogue’s solid, the interactions of the characters are interesting, the way Ford catches glimpses of the sinister world of con men is fine. The film moves well, and looks good, creating a very 1980s noir feel in its nighttime streets and back-room poker games.

Still, it’s too slim. There’s potential here, certainly. And there’s an aesthetic—a visual style and a distinctive way of approaching dramatic material. But there’s a lack of complexity. Mamet didn’t challenge himself enough as a writer, pitting a psychiatrist against con men just for the sake of showing the con men winning. That’s a reasonable outcome, and House of Games does demonstrate the practical grasp of psychology a good con man has to have. But the dramatic conflict’s weakened by the naivete of the psychiatrist, making it too obvious where the movie’s going. A storyteller always rigs their game, but it doesn’t work if the audience can tell the cards are marked.