A look back at 1981’s Absence of Malice, when newspapers were humming. 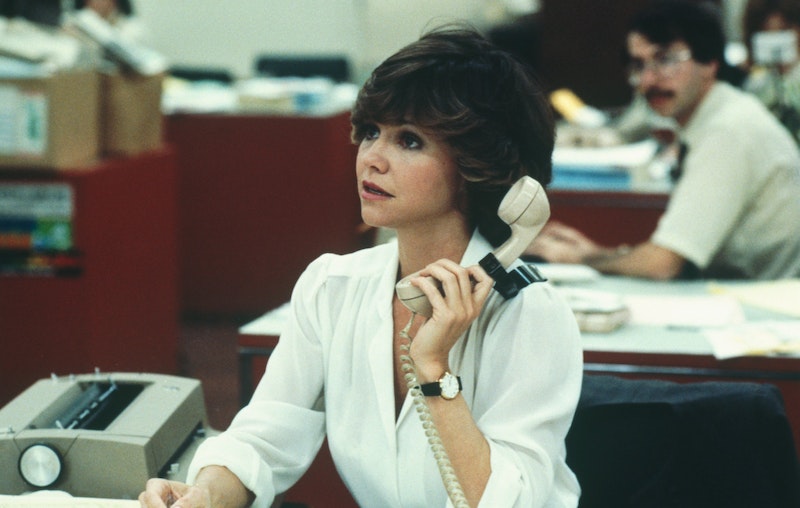 Several years ago, two movies about newspapers—the excellent Spotlight (2015) and awful The Post (2017), which featured Tom Hanks as a milquetoast Ben Bradlee, although it’s unlikely anyone could surpass Jason Robards’ portrayal of the my-cock’s-bigger-than-yours Bradlee in All The President’s Men—made a lot of money at the box office. It struck me at the time that it was ripe for newspaper nostalgia, as the industry was/is in freefall. I suspect that once the pandemic recedes and Hollywood figures out that films aside from superhero franchise crowd-pleasers, like Star Wars XIV, can make money, more media/newspaper entries will appear, and some might be worthwhile, like Spotlight. I’d like to watch a film about the “woke revolution” at The New York Times, for example, or a biopic about Rupert Murdoch, who, while ostensibly still active at 90, doesn’t have time on his side.

My son Nicky and I have written previously for Splice Today about our family’s lockdown/quarantine movie schedule: for more than a year now, forced to abandon our weekend ritual of attending matinees, the four of us take turns choosing films, from John Ford classics to Paul Rudd slapstick sweet pickles, to watch on the flatscreen in the sunroom. Last Saturday I picked Sydney Pollack’s 1981 Absence of Malice, a yarn about a borderline shady businessman (Paul Newman) getting screwed by the local Miami daily, and in particular a self-righteous and arrogant reporter played by The Flying Nun Sally Field.

Although the industry was thrilled by double-digit profit margins at the time, which would only increase until the Internet purloined revenues, starting with classified ads and then everything else, including subscribers to print editions, viewed today Absence of Malice can also be seen as an artifact of a different American cultural era. (You can quibble that newspapers were “cultural,” but I won’t get bogged down in that argument, which in any case is now irrelevant.)

Absence of Malice is a cut above pedestrian, mostly for the performances of Newman, Melinda Dillon, Bob Balaban and a very funny 10-minute scene with the winning Wilford Brimley (intentionally or not, recalling Watergate star Sen. Sam Ervin) squaring up the legal mess involving the newspaper, prosecutors and the reporter at the center, Field, who’s typically plain awful. Had Charlotte Rampling, so integral to Sidney Lumet’s The Verdict (1982 and also starring Newman) played Field’s part of Miami Standard reporter Megan Carter, the movie would’ve been immeasurably improved.

But here’s where it’s nostalgic: the film opens with papers whizzing off the printing press, bundled and then distributed around the city, a common enough scene in past films, but one that really couldn’t be repeated today. And there’s the ubiquitous scene of a story’s subject, awake at dawn, reading the paper and then running around the neighborhood confiscating copies so the neighbors don’t see. Also striking is not only a packed newsroom, but an editor—named Mack, because every newspaper movie has to have a “Mack” at some point in the action—going over every sentence of Carter’s story on Newman’s Michael Gallagher (who wasn’t contacted, even for a pro forma “no comment”) and debating what should and shouldn’t be in the final version.

It doesn't matter that the printed story was unfair and inaccurate, or that it was brought to the paper’s lawyer, who after a few minutes and self-important suggestions waved his wand over it; what’s key is that this was a time when a reporter’s story was talked about with an editor, and chewed over until a satisfactory conclusion is reached.

It’s impossible to conjure up that image today—granted the year and more of pandemic-related empty newsrooms is, at least I hope, an outlier—because newspapers as a rule just don’t have that many in-the-background editors, researchers and fact-checkers. Instead, often a columnist or reporter (who’s expected to furnish more copy than ever for the digital page, even if just updates) simply sends the story for publication to the organization’s website. There are exceptions: it wouldn’t be surprising if a long news or feature story at The New York Times (but not op-eds; the very bad roster of columnists can’t be trifled with, even the My Prose Is Flat Thomas Friedman and ethically-challenged David Brooks) is looked at by 50 people, with everyone having a vote on this or that sentence to make sure, say, a Brazilian lesbian isn’t demeaned. I think it’s different at the Bezos-rich Washington Post, where, as I’ve mentioned before, the editors just pack as much “content” as possible into the print paper and digital edition, regardless of quality.

I’ve no interest in England’s Royal Family—especially the emasculated Harry and consort Meghan “Hear Me Roar” Markle; although it’s curious how the alleged gay Prince Edward has been stuffed in a closet for a generation—but did enjoy reading Gerard Baker in The Wall Street Journal on Monday: “[Prince Philip] could be offensive, of course. If the fragile little adolescent minds that now control most of our media and cultural institutions are ‘triggered’ by an ugly word, God knows what they would make of an outspoken duke’s taxonomy. But he understood well something we have lost—that being offended is part of life.”

It’s a “problematic” term, but I’m a free-market capitalist and make no apologies about it. That doesn't mean the price-gouging of some companies doesn’t get me in a lather on occasion. Last Friday, Nicky and I had appointments at the Baltimore Convention Center to receive our first Pfizer vaccination shot (and, thankfully, as he mentioned on Monday, the facility was a no-selfie zone, although I’m certainly in this age of Look At Me! there were countless violations) and, figuring if we left at eight a.m. we might not be stuck there for three hours. Nicky ordered a Lyft, which picked him up in Waverly, retrieved me in Guilford, and then the amiable driver moseyed the four or so miles to our destination. I’ve never ordered a Lyft or Uber myself—I prefer cabbies—but a ride’s a ride.

Sort of. As I posted on Twitter last Friday, “Lyft can bite me,” for the cost of this short drive was a mercenary $70—rush hour surcharge, drizzling rain surcharge, volume of ride requests surcharge, Friday surcharge and on and on—which is considerably more than a trip from my house, by cab, to the airport. Flat-out larceny. Amazon is predatory in its business practices—which is why Jeff Bezos has a presence in Washington, D.C., to compare masks with the right power brokers—but at least the prices remain low.

I don’t blame Lyft or Uber for squeezing every last dollar out of customers—business is business—but it’d be swell if two or three other concerns waded into the ride-sharing (I never understood the “share” part; it’s not like the drives “shares” the tab with the customer) market. I’ll still opt for the cabbie every time, but befitting the present “we” culture, I’ve got your backs.