The Wild Life (1984), one of the best and most interesting 1980s teen movies, has been reissued on Blu-ray. 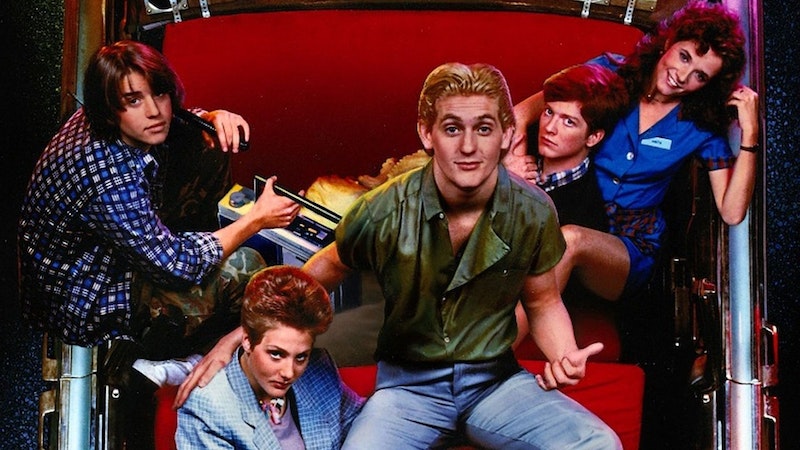 Sixteen Candles has its moments. Ferris Bueller’s Day Off is cool. Fast Times at Ridgemont High (released in a Criterion package next month) is iconic. But some fans consider The Wild Life the pinnacle of 1980s teen cinema. A cult favorite for years that’s been hard to find, it’s a perfect intersection of the era’s fashion, music, cars, and sex. It also features the great Chris Penn. Penn, who died in 2006, was a superior actor to his brother Sean, who played stoner Jeff Spicoli in Fast Times at Ridgemont High.

Here’s The Wild Life plot summary from IMDB: “A high-school wrestler parties with his buddy at a swinging-singles apartment complex.” There’s more to it than that, with most of the various young characters following love interests over the course of the summer weeks leading up to the start of school. The cast is a who’s who of Regan-era Hollywood: Penn, Lea Thompson, Ilan Mitchell-Smith (before Weird Science), Jenny Wright, Eric Stoltz, Rick Moranis, Hart Bochner (best known now as the yuppie dickhead Ellis in Die Hard), and Randy Quaid as the crazy Vietnam veteran Charlie. The musical score is by, believe it or not, Edward Van Halen. Ben Stein and the stripper Kitten Natividad make appearances. Chris Penn’s catch phrase throughout the film: “It’s casual.”

The Wild Life was written and produced by Cameron Crowe, who also wrote the book Fast Times at Ridgemont High and the screenplay for the subsequent 1982 film. The audio commentary in the new Kino Lobber Blu-ray is provided by Mike “McBeardo” McPadden and Ian Christe. Christe is a disc jockey and the author of Sound of the Beast: The Complete Headbanging History of Heavy Metal. McPadden, who died in 2020, is the author of Teen Movie Hell, a comprehensive survey of 1980s teen movies.

Christe and McPadden explain The Wild Life as a kind of shadow version of Fast Times. Most of the film takes place at night in L.A., and the characters aren’t as aspirational as the teens in Fast Times. These kids all have summer jobs, and while there’s talk of marriage, no one mentions going to college. Penn’s high school wrestler Tom Drake and his more mature and motivated friend Bill Conrad work in a bowling alley. Bill gets a nice new apartment in a swanky singles complex, and, needing money to make the rent, asks Tom to be his roommate. Whereas the surfer Spicoli in Fast Times is cute and cuddly, Tom Drake, as McPadden put it, is “the Spicoli you would know in real life—he’s a force of destruction who is actually dangerous and insane.”

McPadden knew every detail of these 1980s teen movies—the date of release, the actors and locations, even what theater he saw them in. He calls 1984 “the most 80s year of the 80s.” There was Reagan, the Los Angeles Olympics, MTV. There was a lot more freedom and authorities tended to let stuff slide. It wasn’t unusually to see 14-year-old kids like Ilan Mitchell-Smith’s Jim wandering around late at night smoking cigarettes and sneaking a beer. McPadden: “There was a time when you could be fourteen and go around smoking and the only one who would give you hard time was an asshole cop.” That same cop might also let you off with a warning if you were caught driving with an open beer in the front seat.

McPadden and Christe also observe that the female characters in The Wild Life, like the female characters in other Cameron Crowe films, have richer, more responsible and more introspective lives than the boys. The female leads in The Wild Life, Lea Thompson and Jenny Wright, share several scenes where they talk about love, work, orgasms and the deficiencies of the dudes that keep coming around to see them. (Wright also has a small role in the great 1988 film The Chocolate War.)

It’s common in our new woke age to condemn films like The Wild Life for its rough, crude and sexist outlook, but this wouldn’t be entirely fair. Chris Penn’s Tom Drake may be a high school wrestling champion, but he’s also desperately in love and awkwardly making mistakes even when he’s trying to impress Jenny Wright’s Eileen. As Cintra Wilson wrote in Salon, Chris Penn was in many ways a better actor than brother Sean. Wilson: “I think it's kind of easy for a skilled, handsome actor with an imagination and an ego to act like the sexiest mahfugger in town—James Dean, Marlon Brando, Sean Penn—but it takes someone really fearless to look openly lame, shamed, screwed-up, dumb and scared. A character who knows he is not and will never be Slick King Fabulous, while he does not inspire oiled-torso photo spreads in Vanity Fair, is ultimately way more intriguing and sympathetic, for that is the painful secret at the core of being a human being—nobody is Slick King Fabulous, even when he is.”