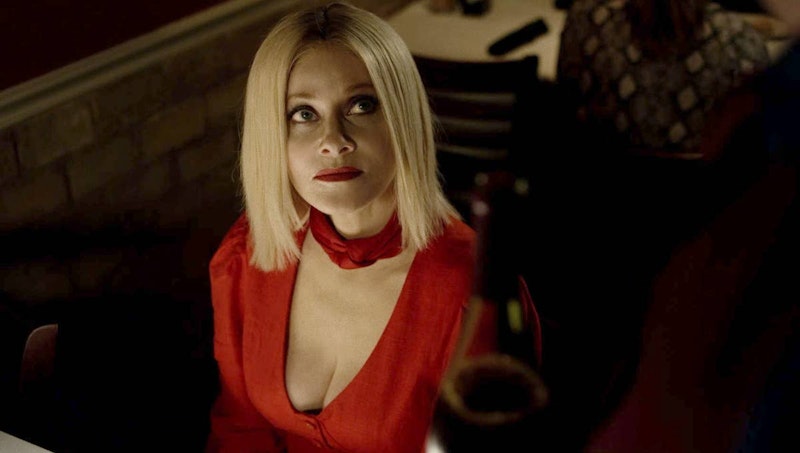 Barbara Crampton is one of horror’s best-known B-movie scream queens. She’s probably most famous for her role in the body horror comedy Re-Animator (1984) in which she managed to inject personality and intelligence into an underwritten role as shapely cipher, all the way to her final fade-to-black shriek. Almost 40 years later, Jakob’s Wife, directed by Travis Stevens, gives her more to do and more space to do it in. But even though the movie is obviously meant as a tribute to Crampton, it’s still oddly reticent to let her be at the center of her own story. It’s a feminist film that doesn’t have the courage to tear out the patriarchy’s throat.

Jakob’s Wife is set in small-town America. Crampton is Anne, the long-suffering wife of Jakob Fedder (Larry Fessenden), a blandly boorish pastor who interrupts her constantly, brushes his teeth with too much vigor, and expects her to make breakfast for him every morning. The tedious routine is broken when Anne’s bitten by the Master (Bonnie Aarons) and suddenly starts wearing plunging necklines and redecorating the living room by hoisting couches around with ease.

There’s a wonderful campy gorefest here waiting to break free. In that movie that never was, Anne tears off her husband’s genitals in the first 15 minutes and then spends the rest of the film seducing and bathing in the entrails of the irritatingly sincere cop, the condescending neighbors, the sincere wholesome parishioners, and all the other boring, repressive clichés of Christian small-town Americana, even unto the presumptuous big-city ex-boyfriend. Crampton makes it clear she’s ready to go the distance, putting on an angel-of-death intensity for her morning aerobics, licking the nice neighbor’s blood off the floor tiles, and shifting from feral beast to exasperated wife to 60-year-old sex symbol without missing a beat.

Crampton’s performance is mesmerizing, but the film, like her husband, doesn’t understand what it has. Instead of letting the star off the leash, it hems and haws and keeps turning the focus back to the good, boring reverend. How can he save his wife? Can the two of them reconcile? Can he summon the courage to kill vampires? These are the question the film wants us to consider, even though the only interrogative that kept running through my mind whenever his potato-shaped, indifferently expressive visage filled the screen was, “Why isn’t he dead yet?”

The whole point of the film is that Anne never gets to live the big life she wants and deserves because she’s in Jakob’s shapeless shadow. But even as it tells her to seize her own life, the movie won’t let her get rid of him. It insists she loves him, though it does little to show why he might be lovable, and less to convince us that Anne’s feelings for him go beyond duty. Their sex scene has a lot less heat than Anne generates with her own hand, and as far as repartee goes, Anne’s a lot more comfortable with that big city ex—or with the Nosferatu-esque Master, for that matter. (Lesbian sexuality is yet one more possibility Jakob’s Wife resolutely avoids.)

“Thirty years of being dutiful, obedient, supportive but never satisfied in your own desires,” the vampire hisses. Crampton’s career is longer than that, but the line rings true. With decades of supporting horror movie roles behind her, the actor deserves a script and a director willing to let her chew all the scenery, just as Anne deserves all the sex and dream all the dreams. Instead, Anne and Crampton both are stuck in this small, confused movie, which makes feminist noises, but lets Anne’s husband talk over her, for no other apparent reason than that he’s a man.