What the movie leaves out from the book is just how much these elderly people are exploited at the seasonal jobs they take. 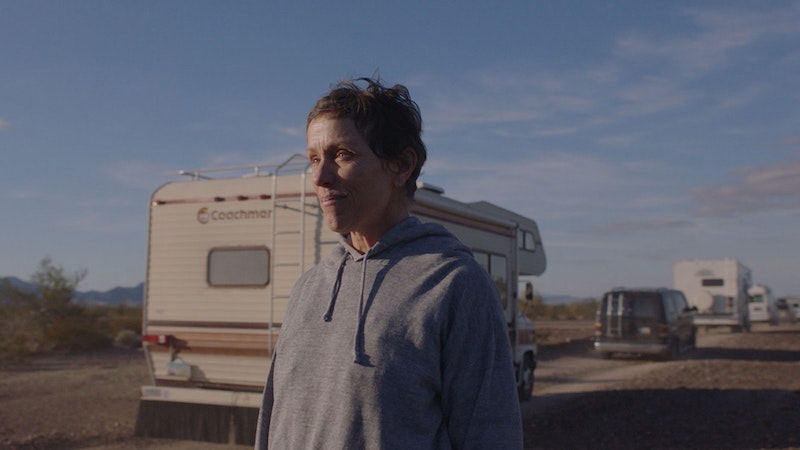 Jessica Bruder’s book Nomadland follows a group of older Americans who, after the financial crisis of 2008 (the one where the Bush and the Obama administrations bailed out the banks and not the people) find themselves unable to afford housing, either losing their houses and/or simply unable to afford rent with their meager Social Security income. So, these “houseless” people (as they sometimes call themselves) along with thousands of others, have put their money into vans, living out of them, traveling in great migrations, working seasonal jobs, like at Amazon warehouses and sugar beet harvests. Many claim in interviews that they enjoy the lifestyle, and that may be true, but most of them are one big car repair, or hospital bill away from true bankruptcy, and maybe true homelessness.

Note: These are not the #VanLife-ers that’ve flooded the mainstream media in recent years, thirtysomethings working teach jobs on their laptops while they travel from beach to beach in customized, expensive Mercedes vans with mountain bikes mounted on top. In contrast, the RVs and vans in Nomadland, like Fern’s, are clunkers. Bruder sticks with a loose group of elders in Nomadland, though both her book and the movie give glimpses of younger nomads (some called “Rainbows” after the Rainbow Gathering crowd) traveling in their own communities. Who gets lost is, I’m sure, the middlesomethings, especially those with children. And people of color.

The Nomadland movie, directed by Chloé Zhao (who also wrote the script with Bruder) follows Fern (played by Frances McDormand. Fern, an older widow, embarks on her new life as a nomad (as some of the community call themselves) gradually meeting and learning from the cast of actual real-life nomads featured in Bruder’s book, including Linda May and Patricia Grier.

What the movie leaves out from the book is just how much these elderly people are exploited at the seasonal jobs they take. Fern is shown working at a happy-seeming real Amazon warehouse. I assume there was some kind of quid pro quo deal made: access to the warehouse in exchange for not talking about conditions inside. For example, the book Nomadland tells us more than once, based on people using Fitbits on the job, that some workers can walk up to 13-15 miles, on cement, over the course of one shift (which might be a night shift, and seems to be routinely 10-12 hours during the holiday season). Again, these are people in their mid-60s. They then return to RV parks, 45 minutes away, to pop Ibuprofens and collapse until the next day, six days a week.

The movie goes a little more into this exploitation at other jobs, though still not as much as Bruder’s book, like people in their 60s shoveling sugar beets on 12-hour night shifts (where attrition is high). Even what might seem like a mellow job, a campground host in State or National Forests and Parks, ends up being an all-day job: Paid for eight hours a day (with a rent-free site) often by sub-contractors for government campgrounds, hosts greet visitors at any hour and, from Bruder’s descriptions, just cleaning the bathrooms three times a day takes up most of the paid eight hours.

But what both Nomadland the book and especially the movie emphasize is the sense of community that develops, intentionally or not, among these the nomads: after the holiday season, many head south for the BLM deserts of southern Arizona, near Quartizite, for the warmer nights, and the free camping available. Here, true anarchist communities pop up and form and return yearly: with, at least in the community Bruder features, nightly potlucks, free classes and presentations, and nightly campfires. Here is a support group: when someone’s car breaks down, they can get rides into town. Neither Bruder nor Zhao will outright say this, but these communities, if temporary, and perfect examples of anarchist collectives (of the “without leaders” kind), giving a hint as what post-capitalism might look like.

After this last year, in which, during the pandemic, our government basically abandoned the American people, while sending most “relief” money to corporations, there will be thousands more no longer able to afford housing, anywhere, without jobs. You may not hear about them much in the mainstream narrative, but they’re there: check the Walmart parking lots and BLM and Forest Service land this summer. As Bruder points out: most nomads are able to “pass” as normal, coming into town to get wi-fi from Starbucks, but returning at night out to the forests and deserts (or even sleeping in cities, in residential neighborhoods where a cheap membership to Planet Fitness gets you a hot shower).

Do these houseless people have a choice? Most do, at least theoretically, though to settle down somewhere might be with family who might not be able to really accommodate them. At the end of the Nomadland movie, Fern embraces the lifestyle, embraces her solitude, with full knowledge of how tenuous her life is. For her, and many of the nomads in the book and the movie, life is an adventure, and the risk is worth the freedom and independence. The book Nomadland feels a bit more desperate, again because it shows the reality of the work these elders have to take on just to survive. But this is a rare case when the movie is just as “good” as the book. They compliment each other and should be read together. The world described in both may seem like some kind of post-apocalyptic vision of some future America, but this is America, has been for a while, and will probably get worse after that last year.