Film Review: Sorry to Bother You is Best of 2018 to Date 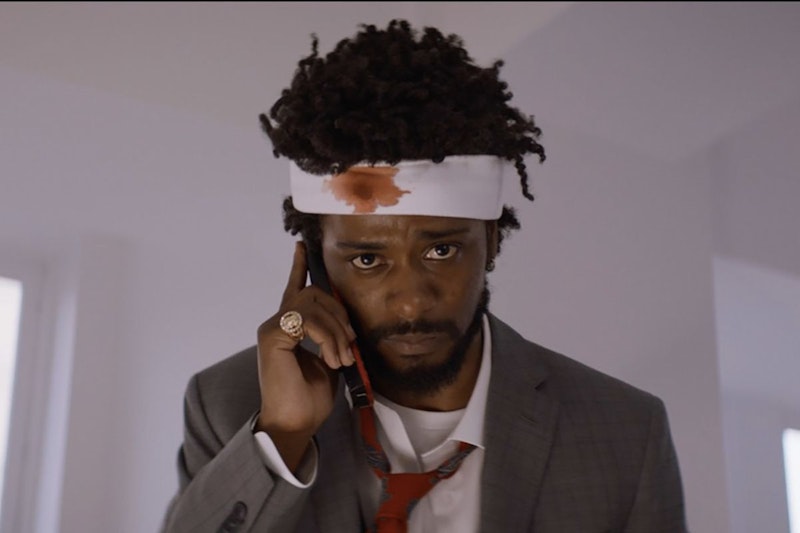 Sorry to Bother You is a film with radical politics, audacity, and ideas that straddle a long list of genres, styles and subjects. It’s a wildly entertaining and groundbreaking film, the best of 2018 to date—and it comes from a first-time writer/director who’s a 47-year-old career rapper.

Like last year’s Get Out, Sorry to Bother You is a genre-bending exercise, with toes dipped in comedy, suspense and sci-fi, with a predominantly black cast and a director previously best known for something else. It announces the arrival of a major new cinematic voice—and it’s even more incendiary than Jordan Peele’s film.

The film was written and directed by Boots Riley, who’s spent most of the last 20-odd years as a rapper and has never worked on a film until now. His group The Coup has been obscure but well-regarded for a long time, perhaps best known for a pre-9/11 album cover that looked a lot like the World Trade Center blowing up. But Riley demonstrates a mastery of film pacing and style that makes him appear a seasoned veteran.

Sorry to Bother You is set in an Oakland that’s about 25 degrees askew from real life, much the way the TV series Atlanta is off-kilter from the real place. Lakeith Stanfield—who played supporting roles in both Get Out and Atlanta—stars here as Cassius Green, a youngish guy who takes a job as a telemarketer, while trying to impress his feminist performance artist girlfriend (a never-better Tessa Thompson.) Cassius struggles at first, but starts to thrive at the office when he adopts a “white voice” (voiced by David Cross).

But that’s not what the movie’s ultimately about; really, it’s only the first act. It goes off into some wild directions that I won’t spoil, although they involve Armie Hammer as a monstrous Silicon Valley CEO who’s like a more malevolent Elon Musk.

Sorry to Bother You works on so many different levels. It’s a trenchant, timely satire about race relations, labor relations, late capitalism and much more. It’s funny, but also dark at times, and goes places where even Get Out never treaded.

Then, in it’s third act, Sorry to Bother You does something incredible: it asks its audience to take a huge leap of faith, completely adjusting and changing the stakes in a way that’s absolutely batshit. But the film stays so committed to the bit that it never falls apart.

Stanfield, who’s had memorable supporting roles in movies and TV ever since his debut in Short Term 12, steps into the lead this time and is just right, but the film belongs to Tessa Thompson, playing a truly original character that I can see becoming iconic. Thompson’s been a standout in a lot lately—Creed, Thor: Ragnarok and this year’s Annihilation, but this is her best.

One of the reasons why Sorry to Bother You excels is that while it has a clear political agenda, it’s interested in serving as a great movie, above all, and there’s not a whiff of smugness to it.

Shock and Awe Just Misses Its Mark. B-

Rob Reiner’s Shock and Awe tells the story of the reporters in Knight Ridder’s Washington bureau who got the Iraq/WMD story right when everyone else got it wrong. It’s a movie in the tradition of All The President’s Men, and Spotlight.

Shock and Awe gives these reporters credit for getting it right, and at its best moments, it resembles those films, as skilled actors dramatize events from recent history, in a way that was probably more dramatically satisfying than how it actually went down. But the film also gets bogged down in some sluggish, on-the-nose dialogue, a framing device that doesn’t work, and a complete lack of a third act.

Reiner’s film is set in the DC office of the now-defunct news service Knight Ridder, roughly between the 9/11 attacks and the opening months of the Iraq War. Jonathan Landay (Woody Harrelson) and Warren Strobel (James Marsden), along with their editor John Walcott (Reiner), appear to be the only journalists in all of Washington who show the slightest skepticism about Iraq and WMDs.

They’re later joined by Joe Galloway (Tommy Lee Jones), the legendary foreign correspondent who won a Bronze Star in Vietnam even though he was a journalist and not a soldier. We see their reporting that figured out how bogus the case for war was.

All the President’s Men had Deep Throat, but in a corny device that doesn’t quite work, Shock and Awe presents about 10 different Deep Throats, all with names like “Loose Nukes” and “The Usual,” while the rest are merely identified as “Senior Administration Official” or “Anonymous Source.” The only one who really makes an impression is Richard Schiff, returning to Washington intrigue as a high-level Pentagon source.

Harrelson’s a joy to watch, as usual, as are Marsden and Jones, although Jessica Biel is given little to do as Marsden’s love interest, and Milla Jovovich plays a nagging-wife role best left in another decade.

There are other things that don’t land, including a framing device (involving a soldier wounded in Iraq) who the movie keeps forgetting about, and dialogue that’s rooted in clichés. And the film treats everything with 20/20 hindsight, in a way that comes across as very smug.

And while most of the journalism material rings true, there’s one moment when Harrelson is on the phone with a source he’s had a hard time getting to talk, she finally tells him (“the vice president is lying”), and Harrelson… hangs up the phone and celebrates. Instead of, you know, staying on the line and getting more information.

While these journalists got this important story right, none of them became famous. Galloway is the only real-life journo in the movie who even has a Wikipedia entry. The film might’ve been better off exploring why exactly this was the case—they didn’t play the Washington game? They weren’t as careerist as some of their colleagues? Instead of exploring that question, the film ends abruptly, at just over the 90-minute mark.