Woody Allen's latest film, Midnight In Paris, is also his best in years. 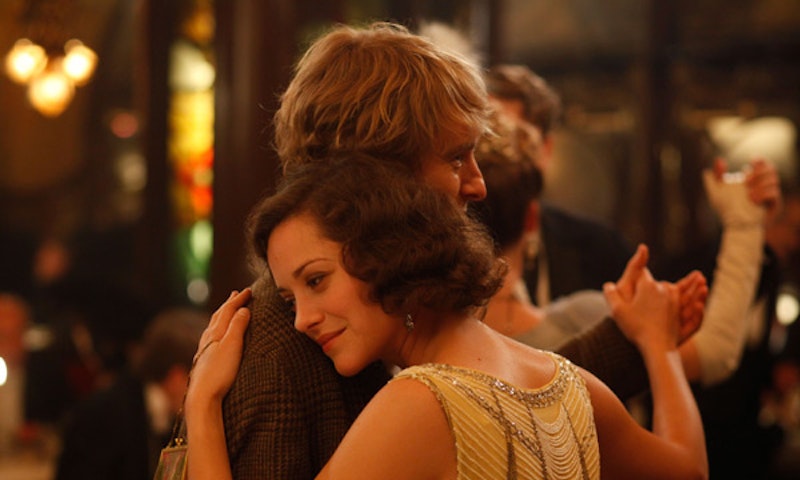 Midnight in Paris is Woody Allen’s 11th film in as many years, a remarkable fact given his age and already stacked/clogged filmography. Allen’s ceaseless productivity is despised by most film critics and cineastes who wish he would’ve called it quits at Manhattan, but to me there’s nothing more admirable than sticking to your artistic guns even after everyone in town has dismissed you as a hack or a perv (they’re in love! It’s not that weird). Allen’s Spartan work ethic is inspiring for young filmmakers, far more so than say Terrence Malick, who presumably must meditate under a Bodhi tree for eight years before writing a new screenplay, or Quentin Tarantino, content to refry Grindhouse beans and party, party, party. Allen’s later period work doesn’t have the revelations of his best 15 years, but they’re all quality made films that carry the torch of a dying breed: films with heart.

Sorry if I made you choke. I know it sounds trite, but Midnight in Paris is a film that cares about who’s watching it. Owen Wilson plays a struggling writer on holiday in Paris with his harpy-lite fiancée (Rachel McAdams). Drunk and melancholic one night, Wilson is picked up by a strange carriage car and taken to a ball where he meets F. Scott Fitzgerald and his Zelda, quickly realizing he’s somehow ended up in the 1920s, an era he’d longed to thrive in. Hemingway, Dali, Picasso, and Bunuel later pop up. Wilson starts taking the carriage car back in time every night, much to the ire and suspicion of his fiancée and her truculent, conservative father. He gets notes on his novel from Gertrude Stein, drinks himself belligerent with Hemingway, and romances Picasso’s muse (Marion Cotilliard), eventually realizing his fixation on the past is just a way of avoiding the present.

All this good stuff would’ve sunk without Allen’s wit—Michael Sheen’s character is a perfect New York pseudo-intellectual, a pretentious and pedantic fool who has some of the best lines in the movie (“Is he a good writer? Have you even read his prose?”). This is a consistently funny movie; even the half-dead geriatric crowd I saw it with was thoroughly pleased (though maybe things are funnier with one foot in the grave…).

This is a tight, concise picture that jettisons the ponderous and tone-deaf color of his worst 2000’s work. This leaves the most touching and remarkably human story Allen’s crafted in years, a warm ode on living in the past and artistic satisfaction. Owen Wilson is very much Owen Wilson in this movie, but his schtick is more endearing than annoying here, the struggling artist against a disinterested world (McAdams and family), meandering alone in the rain across Paris, longing to live and work amongst his heroes in the past. Again, I know this reeks of bland Hallmark dreck, but Midnight in Paris is that rare alchemy of sentimentality, realism, and honesty that’s practically extinct in film today. This feels like a fable more than anything, a message from Sage Allen to all young artists: thrive in your own time and overcome nostalgia, as the past wasn’t as good as anyone remembers it.