Nothing Will Ever Happen Again

Terence Malick's latest film, The Tree of Life, is a "vague, shambling mess." 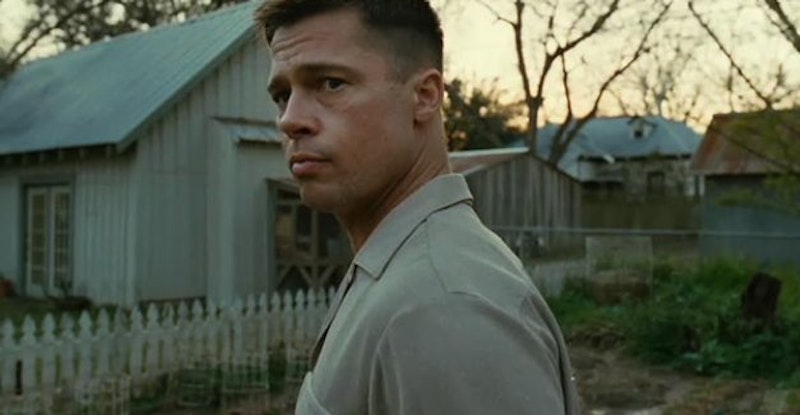 Pretentious is a word that gets thrown around too easily, as a defense mechanism or by people who don’t even know what it means. We don’t like to feel stupid or talked down to at the movies, and rarely do we blame ourselves when a film goes over our heads. It’s always the fault of the navel-gazing, self-indulgent director, not a close-minded audience. I have an affinity for movies like these: big, intentional, expressive and idiosyncratic artistic statements that make no compromises, direct brain to reality alchemy. When a picture dares to be for somebody, not everybody, the reaction and emotional connection the filmmaker creates with the audience goes beyond words. It’s an electric, buzzing feeling, and it’s the best balm for loneliness. The Tree of Life has certainly shaken out to be one of those films for a lot of people; Roger Ebert’s review was ejaculatory, and Cannes granted it the Palme d’Or, the first American film to win since Fahrenheit 9/11. That said…

The Tree of Life is one of the most pretentious, self-serving, self-indulgent, vague, incomprehensible, and mind-numbingly boring films I’ve ever seen. I can’t stress how awful this movie is. Put the knives away, cineastes: I love epic and experimental auteur films that shun formula. Coming from someone who lives for movies like Synecdoche NY, Paris Texas, and Koyaanisqatsi, the odor of egoist ooze is overpowering here, and Terrence Malick’s refusal to mix with the press seems of a piece with his film’s God-like authorial tone. Malick projects that he’s delving deep into life’s infinite mysteries, but his film goes absolutely nowhere. If you’ve seen the trailer, you’ve seen the movie: fragmented slices of life of a family in the 1950s suburbs, Sean Penn grappling with daddy issues in the present, and space clouds looking pretty.

Again, non-linear narratives are fine, but Malick’s film has absolutely no arc. It glides along at a self-assured clip that leaves the audience struggling for any kind of message or feeling, other than the complexity and mystery of life. We jump from era to era willy-nilly, given minimal context or opportunity to learn more about the characters beyond their various looks and reactions. Malick is known for his lack of dialogue and exposition, leaving meaning to be inferred from his characters’ body language and their behavior. The film is supposed to inspire memories, but at its core it just doesn’t feel real. Malick’s presence is so obtrusive that it comes off as contrived and precious. I don’t get vast humility, or nostalgia; I see someone trying too hard to make The Most Important Film of Our Time.

The cinematography of Emmanuel Lubezki is remarkably smooth and human, allowing the whole picture a very loose, relaxed appearance that may be its strongest suit (the photography on the whole is gorgeous). This film has so many of the makings of a classic; yet what I’ve been struggling with is the dissonance of the film’s intention and the result. There’s no meat to this movie, there’s no moment or scene or character or idea or action or voiceover that doesn’t feel like a parody. This is a film that reinforces every cliché and joke about auteur directors, about “difficult” and experimental films, and about films that really mean something. For all its self-important pomp, The Tree of Life is a vague, sad shambling mess, one that may fuel the wet dreams of critics, but for the rest of us, it’s absolute bottom of the trash barrel trash.