Fuel To Burn, Roads To Drive

They don’t make car chase movies like they did in the 70s. 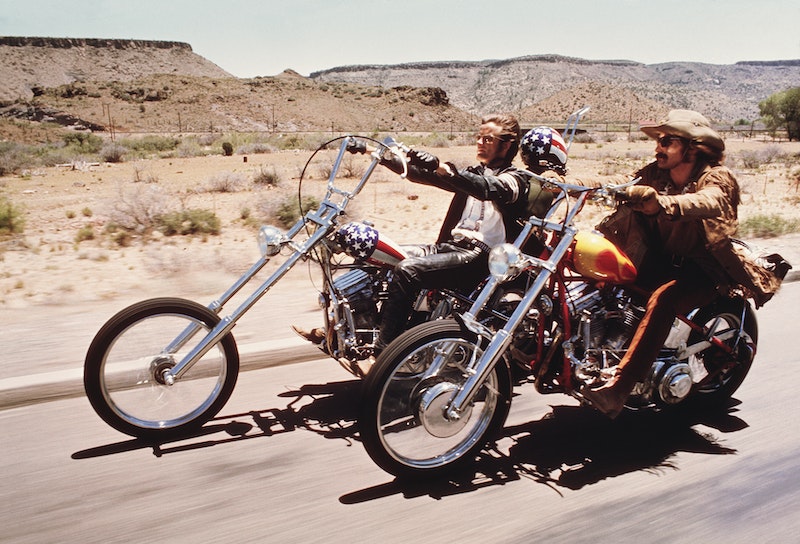 Having skipped directly from the winter that wouldn’t end to the summer that will kill us all, what better time to avoid $4 gas by living vicariously through some primo car chase DVDs and cranking the AC so high your eyebrows freeze?

Specifically, the early to mid-1970s was the glory era for the American car chase movie. Vietnam War? Rising oil prices? Richard Nixon? Terry Jacks? These and other ills could be wiped away—at least momentarily—by a trip to the drive-in to catch the latest hi-octane flipping of the bird to the cops and/or The Man. And, this being the 1970s, chances were good that our lead-footed heroes wouldn’t make it to the end alive.

The all-time classic of the era remains Monte Hellman’s 1971 masterwork Two-Lane Blacktop. Imbued with the existential ennui that paid such dividends for the makers of Easy Rider two years before, the film mostly does away with motive and characterization (even character names) to focus in on what happens when a couple of driftin’ hot rodders (singers James Taylor and Dennis Wilson in their only acting roles) hook up with a driftin’ chick (Laurie Bird) and agree to race from California to D.C. against a guy who drives a Pontiac GTO (Warren Oates).

And…that’s pretty much it. Identified in the credits as, respectively, The Driver, The Mechanic, The Girl, and GTO, the four cruise the back roads of America, ignoring the occasional beauty of the surrounding landscape to hone in on that next mile marker. The juxtaposition of Taylor’s and Wilson’s stiff delivery of what little dialogue they’re given with Oates’ garrulous tale-telling to the many hitchhikers he picks up—GTO has a different background for everyone he meets—makes up most of the film’s arid-dry humor.

Hellman and screenwriter Rudy Wurlitzer have taken Easy Rider’s “search for America” to its null point; these characters aren’t looking for America, or for much of anything else. The Driver/Mechanic—Sal Paradise and Dean Moriarty on an infinite hangover—duo pick up money in mostly illegal street races; GTO, done up in an ascot and driving gloves, drops hints that he may have been tossed out of the Air Force, but also seems pretty aimless; all three promise the Girl various vacations after making it to D.C. (New York, Miami, Chicago—even Columbus, Ohio!) before she meanders off with a guy on a motorcycle.

Blacktop must have flummoxed teenage gearheads. With its spare content, Taylor’s surly presence (he reportedly hated working with Hellman), and the fact that the film peters out before reaching D.C., this was a long way from Easy Rider’s “Born to Be Wild.” The famous final shot—the film seeming to burn as The Driver begins yet one more of his never-ending series of races—predicted no future a good six years before the Sex Pistols did.

Coming out a few months before was another future cult favorite, Vanishing Point. Here we’re presented with no-first-name Kowalski (Barry Newman), who delivers a car from San Francisco to Denver and decides to hop immediately into a white 1970 Dodge Challenger for the return trip. Pausing only to score some speed—without wasting time washing it down with water—Kowalski elects to make the trip in under 15 hours.

Meanwhile, blind DJ Super Soul (Cleavon Little, still two years from becoming Blazing Saddles’ Black Bart) in a small town in Nevada makes some kind of telepathic connection to Kowalski, warning him of police roadblocks and the like before the townspeople and the cops bust in and beat him and the station’s staff up in fine ’68 Democratic convention style. Thanks to flashbacks, we learn that Kowalski is a decorated Vietnam vet, former cop, and onetime stock car and motorcycle racer who’s long been bedeviled by the surfing death of a blonde girlfriend.

Indeed, willowy blondes recur in Kowalski’s life, climaxing in the UK version of the film with a rendezvous with a reliably icy Charlotte Rampling, who seems like the model for Jessica Lange’s angel of death figure in All That Jazz. Toss in an unlikely run-in with Delaney & Bonnie & Friends in Death Valley (attended to by the gnomic character actor Severn Darden), Kowalski’s existential angst, and a truly eye-popping ending—not to mention Primal Scream’s salutary 1997 album Vanishing Point—and you’ve got a pretty far out trip, man.

Recently released as a two-disc set, 1974’s Dirty Mary, Crazy Larry and 1975’s Race with the Devil were pretty much the genre’s last gasp, before 1977’s double whammy of Burt Reynolds’ Smokey and the Bandit and Star Wars strangled it. The former finds Peter Fonda and Marlon Brando-wannabe Adam Roarke making off with the contents of a supermarket’s safe, with Fonda’s would-be one night stand—an incredibly screechy Susan George—along for the ride.

Some of the banter among the trio is pretty funny—even if Mary isn’t particularly dirty, and outside of his need for speed, Larry isn’t all that crazy—and the film’s stuffed with some pretty wild stunts, including a helicopter chasing the gang’s 1969 Dodge Charger. (The chopper holds Vic Morrow, who’d have a fatal run-in with a similar machine while making the Twilight Zone movie years later, and provides some unfortunate resonance.) That Dirty, Crazy played theaters on a double bill with Vanishing is no accident, as they both end in similarly high-impact ways.

Fonda’s paired with old pal Oates for Race, which actually should have been called Race FROM the Devil. Along with wives Loretta Swit—taking a break from M*A*S*H—and grade-A screamer Lara Parker, the pair have to outrun a murderous gang of devil worshippers after they accidentally see a human sacrifice during vacation. Oates and company drive a humongous RV, which is incongruously funny enough, though there’s some satisfaction to be had from seeing its evolving destruction. Again, there are some nifty stunts here—all four of these movies use real-time filming; none of the speeded-up film tricks to be found in the Reynolds oeuvre—although the fact that the entire American Southwest is apparently in on the satanic plot is good for a few eye rolls.

Nowadays we’re stuck with excessive, CGI-laden idiocies like the Gone in 60 Seconds remake and Wanted. But once it was possible to imagine hopping into a souped-up rod and shining brightly on the eternal road—at least until the end credits rolled.