Film Review: Where Hands Touch is a Tremendous Miscalculation

The film’s an extended exercise in cringing discomfort. D 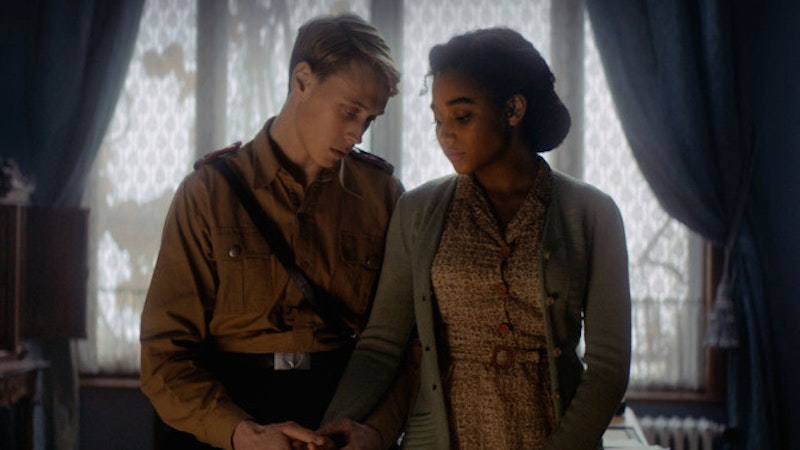 It’s a new Holocaust movie! You may be wondering what kind it’ll turn out to be. One of the eventual Oscar darlings like Schindler’s List, Life Is Beautiful or The Pianist? One of the ones which come and go without anyone caring like Jakob the Liar or Good or Everything is Illuminated? Oh no, this is one of those rare, premium Holocaust films—the kin of The Boy in the Striped Pajamas or (allegedly, since few have actually seen it) The Day the Clown Cried. Where Hands Touch is a sincere, well-intentioned movie which nonetheless utterly falls flat on its face. Miscalculated in innumerable ways both big and small, it becomes an extended exercise in cringing discomfort.

The premise is promising, exploring an aspect of Nazi Germany that often goes ignored in discussion of that time and which is all but entirely left out of popular culture. Amandla Stenberg plays Leyna, a “Rhineland bastard”—an Afro-German child born to a white German woman and an African-French Army soldier in the wake of World War I. With the Second World War raging and Nazi eugenic policies intensifying, Leyna’s mother (Abbie Cornish) moves the family to Berlin, believing she can keep Leyna safe from sterilization there. While trying to keep her head down with fake papers, Leyna meets and begins falling for Lutz (George MacKay), a fervent Hitler Youth member preparing for the day when he’ll be able to join his father (Christopher Eccleston) in the army.

Now, of all the angles to take on this story, “romance between a biracial girl and a Hitler Youth boy” might seem like a staggeringly ill-conceived one, particularly given the times we live in. And you’d be… absolutely right. The film hedges in Lutz’s favor as much as possible. He believes what the Nazis say about the Jews, but he’s not racist-racist! After all, he’s curious about African-American culture, and falls in love with a black girl! He’s just a passionate nationalist! The Nazis are exploiting him and lying to him about what war is like! A lot of this, incidentally, reads like popular apologia used to absolve the greater German populace of culpability in the Holocaust and other sundry war crimes. Not that the movie is trying to exculpate Germans, but bad-faith revisionism and simple incompetence end up looking pretty much the same in the end.

All this in the service of turning the tragedy of World War II and the Holocaust into how it kept possible lovers apart, and less because of, you know, the tens of millions of people who died. In one scene, Lutz and Leyna discuss what might’ve happened to all the Jews mysteriously disappearing, and he asserts that they’ll be put to good work now. Then they have sex for the first time. This is the conversation that leads to sex. Where Hands Touch is not merely misaimed in its ideas but also embarrasses itself executing them.

This extends beyond the script into the filmmaking itself. Director Amma Asante has made decent-looking movies previously, so I don’t know what happened here. Scenes are often over-lit, the visuals strangely softened, as if an attempt at a dreamy or sepia-like suggestion of the past went too far. It struggles to work with budget constraints, with much of the action taking place either on the same street in the city or a simple concentration camp set. The actors are off, usually working in apparently a melodramatic register that instead comes out as plain hysterics. On every level, Where Hands Touch is a misfire.