Moore repeats several of his unfortunate tics as a filmmaker. C 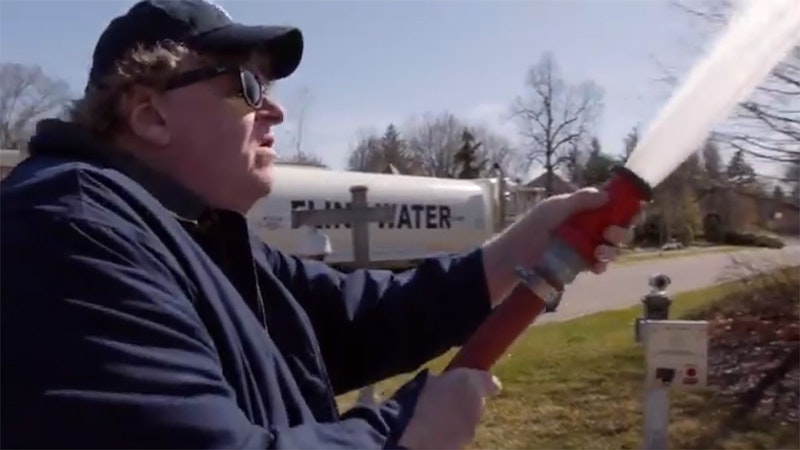 Back in the Bush years, Michael Moore staked out a position that's become familiar in the Trump era: the loud, strident, left-wing, and completely ineffectual public opponent of a bad Republican president. A list of “Resistance” figures, from Ed and Brian Krassenstein on down, owe Moore a debt of gratitude.

The documentarian released Fahrenheit 9/11 in the summer of 2004. The film got a standing ovation at Cannes, got Moore booed at both political conventions, and became (and remains to this day) the highest-grossing documentary of all time. It also failed to change many minds and did nothing to prevent George W. Bush's reelection that same year.

Moore’s back with a pseudo-sequel, reversing the 9/11 to refer to the day after the 2016 election. The film has a few scattered good insights—most notably an extended section dealing with the catastrophic water crisis in Moore's hometown of Flint, Michigan—but overall it doesn't add much to the general critique of Trump that's now been a daily drumbeat for over three years.

Moore also repeats several of his unfortunate tics as a filmmaker: A meandering focus, an ending that goes on forever, grandstanding, and sloppiness with basic facts. Obamacare is not "dead," Barack Obama did not refuse to declare a state of emergency in Flint, nor has Trump actually begun building the wall.

Fahrenheit 11/9 is simply a series of Moore's disconnected observations about American politics in the year 2018, without much of a through-line except for the need to tear down everything and start all over again.

For about the first 40 minutes, the film is all anti-Trump, running through the last few years of Trumpian bad acts, interspersed with footage of Moore's various past run-ins with the president. He and Trump once appeared together on a talk show, hosted by (of all people) Roseanne. Both Jared Kushner and Steve Bannon, in their past lives as aspiring showbiz impresarios, had hands in producing Moore projects. I do give Moore credit for highlighting the President's creepy sexual fixation on his daughter Ivanka.

Trump then takes a backseat for the next hour, as Moore shifts focus first to the Flint water crisis, and later the Stoneham Douglas shooting survivors, the West Virginia teacher strike and a group of lefty candidates for office.

The films shifts back to the President at the end, for an extended discussion of whether it's okay to compare Trump to Hitler, complete with Trump's words set to video of the Fuhrer. I liked that gag better 30 years ago when Woody Allen did it with Mussolini and Alan Alda in Crimes and Misdemeanors. The film then concludes with about four separate endings, one of which for some reason re-enacts that false missile alert in Hawaii.

There are also numerous shots at both Hillary Clinton and the current Democratic Congressional leadership. However, Moore's willingness to criticize the Democrats, and even Barack Obama, isn't bold anymore, in the era of Chapo Trap House. At least those guys are funny when they do it; Moore once had a sense of humor, but he left it behind somewhere in the early-1990s.

The Flint sequence is the film's strongest, shedding light on a disgraceful, deadly episode of pure American venality that remains ongoing. It might’ve behooved Moore to have just made an entire film about the Flint crisis—a calamity that, let's not forget, began two years before Trump took office.

But even then, Moore can't resist such pointless grandstanding horseshit as attempting a citizen's arrest of Michigan governor Rick Snyder, and later spraying a hose of "Flint water" at the Governor's mansion. Snyder, of course, wasn't present for either scene, but even if he had been it's hard to tell exactly what either of those things would have accomplished aside from self-aggrandizement for Moore himself.

Michael Moore makes political documentaries that put forth arguments—GM decimated the industrial Midwest, American gun culture is toxic, health care access should be better, George W. Bush and Donald Trump are bad presidents—with which I sympathize. But Moore's work has always left me cold. His persona is tiresome, he oversimplifies complex issues, and has the annoying tendency to make himself the center of most of his movies. He's also spawned a legion of imitators, led by Morgan Spurlock, who are even worse at this than he is.

Fahrenheit 11/9, like its predecessor 14 years ago, is preaching to the converted, and any of the many liberals I know who live and breathe Trump outrage are undoubtedly going to enjoy what Moore gives them. But the film’s not going to hurt Donald Trump or his presidency in any way whatsoever.