Trump derangement has neutered so many media figures, and Michael Moore is no different. D+ 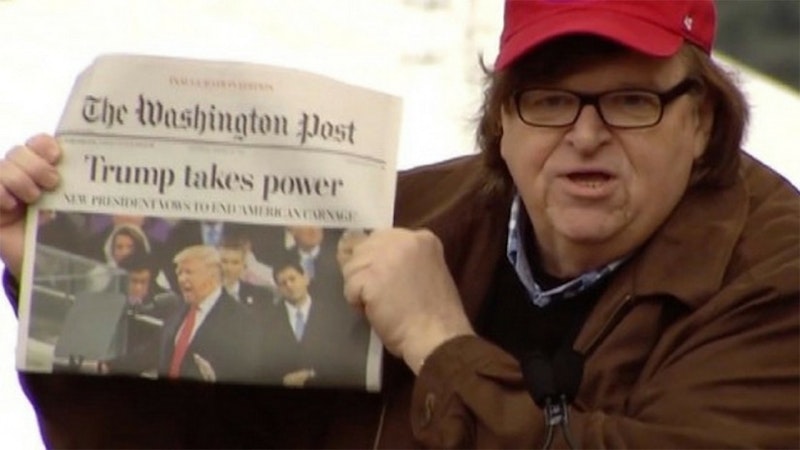 It starts with Fahrenheit 451, a book that misunderstands the nature of censorship and totalitarianism and a title that incorrectly cites the temperature at which paper burns. Then it gets turned into Fahrenheit 9/11, a scattershot polemic that uses that reference to imply something vaguely dystopian about the Bush administration. There’s no true kindship between Ray Bradbury’s book and Michael Moore’s documentary, other than being easy touchstones for simple citations for people who don’t really understand things but like to think they do.

Now we have the reference inverted. Fahrenheit 9/11 becomes Fahrenheit 11/9, implying a sequel relationship to the previous film (the only strong link, honestly), further dystopia, and that November 11th, 2016 was perhaps just as bad as September 11th, 2001. (Moore has lost most of his steps as a provocateur, but that’s honestly risible, I’ll concede.) Never mind that the election was on November 8th—the official Clinton campaign concession was on the 9th, and we need some sweet symmetry. With each iteration the idea grows ever more muddled. It’s like the degradation of meaning of the “-gate” suffix added to every major scandal and minor gaffe alike.

In some ways, the discursive landscape of social media indicates that the rest of the culture has caught up to Moore’s disjointed, unmoored filmmaking style. Fahrenheit 9/11, an awful film, won the Palme d’Or and became the highest-grossing documentary ever because it was a cathartic piece of anti-Bush agitprop among media that was still mostly kowtowing to that gang of boring psychos. Fahrenheit 11/9 is but one of thousands, or millions, of anti-Trump screeds you can easily access on its opening weekend. Almost any journalistic tidbit, conspiracy theory, or opinion shared here you’re likely to have already read or heard.

Fahrenheit 11/9 starts on Election Night 2016, skips backward to put together a timeline of Trump’s reason for running for president, and then there’s an abrupt aside about how creepy his relationship with his daughter is. It keeps drifting from there. For a solid hour, the movie doesn’t even mention Trump, instead focusing on various issues around America. The Flint water crisis, the wildcat teacher strikes across the nation, and the Parkland teen activists all get their own segments. It’s very close to stream of consciousness, without a single throughline or traceable overarching argument. It’s just formless liberal anger, close to useless.

All the while, the slack camerawork and editing and Moore’s irritating attempts at humor and self-mythologizing make the movie’s 120 minutes feel even longer. By the time it gets back to Trump and warning that he’s definitely a new Hitler, the wheels have completely fallen off. This is reinforced by a stunningly slapdash ending, a clear “Yeah, we had no idea where to go with this” surrender.

Fahrenheit 11/9 is most useful as a weathervane for current liberal thought. While there are some of the usual hallmarks (fearmongering about Russian interference, blaming the working class for Trump instead of the Republican Party’s middle- and upper-class base that actually voted for him), there are other, more heartening moments. Moore (rightfully) places a lot of the blame for Trump on establishment Democrats and their overall haplessness and incompetence, directly citing myriad failures by multiple presidents. One expert scorns the idea that there was ever a better America that Trump ruined, pointing out that black people were effectively barred from voting until the 1970s. It even uses the terms “rigged” and “Bernie Sanders” in the same sentence, and if this is now accepted by liberals, there may be hope for some of them yet.

But Moore still can’t express consternation about Obama’s failure to help Flint without clarifying that he still loves the man. Why? He is the establishment the film has railed against. It’s but one example of Fahrenheit 11/9’s incoherence. Early on, the doc claims the 1990s rightward shift in America’s Overton window turned The New York Times from a left publication into an imperial mouthpiece, but when referencing miner strikes in the 1920s, he tut-tuts that the Times did back then what it’s always done by denigrating them (the latter view is correct, for the record). This kind of fusillade of invective with no consideration will do naught but scramble your brains if you go along with it too much. But then, Trump derangement has already neutered so many media figures, so why would Moore be any different?