Film Review: Mandy Can Be Boring, But Nicolas Cage Remains a Champion 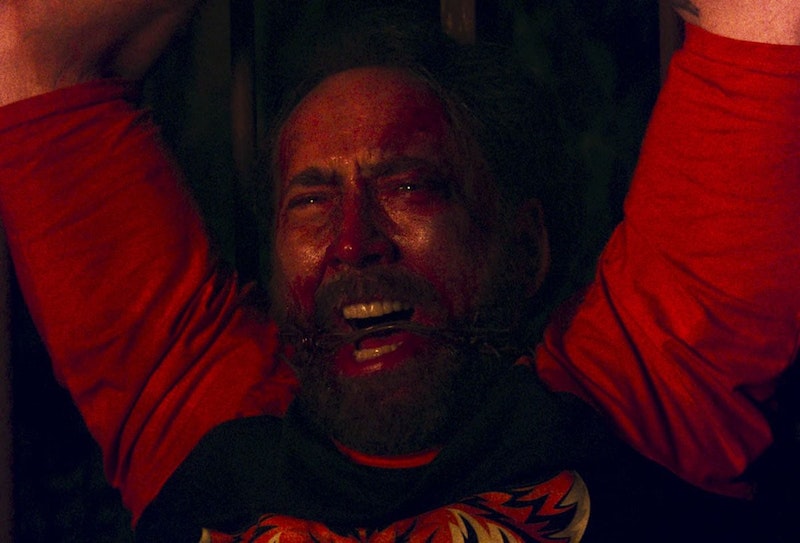 Mandy is made to look like the side decal on a 1980s van, the visuals washed in deep purples and reds and blacks. It’s likewise roaring with a moody electronic soundtrack (one of the last by composer Jóhann Jóhannsson before his sudden death this year). Of the many recent throwback genre pics, this one at least draws some substance out of its style, with director Panos Cosmatos setting up some truly gorgeous and/or badass moments. It’s disappointing, then, that the movie is also overlong and bound to uninteresting clichés—qualities that make it 50/50 between fun and boring.

This is an action/revenge thriller, and fans will often gladly accept well-worn tropes here (I don’t consider myself above this). After all, the point usually lies less in the particulars of the story than the aesthetics, the performances, whatever else the film builds around the familiar skeleton. But there are also certain conventions that would be best retired at this point, and (SPOILER, though come on, you know where this is going) the murdered wife/girlfriend is near the top of that pile. There’s no quicker way to spoil good fun than with some retrograde misogyny.

The girlfriend in question is the titular Mandy (Andrea Riseborough), an artist living in California’s Shadow Mountains (astonishingly a real place with that actual name) with logger Red Miller (Nicolas Cage) in 1983. After Mandy catches the attention of a local insane cult leader, some unpleasantness happens which ultimately sets Red on a rampage of vengeance. As one does.

Cosmatos and co-writer Aaron Stewart-Ahn sprinkle plenty of distinctive notes into the film, from a bizarre quasi-demonic biker gang summoned by the cult through an eldritch ritual to an imposing, sometimes Escherian pyramid in the woods. And then there’s the one thing that will assuredly preserve this film in memory for decades to come: an incredible chainsaw swordfight between Cage and a baddie.

However, to get to those fun parts requires no small measure of perseverance. A 90- or 80-minute version of Mandy would probably be a (problematic) joy, but at over two hours there are many stretches where it all but putters to a halt. This is especially true of the first half, where attempts to flesh out Mandy and her relationship with Red before her inevitable offing merely try the audience’s patience.

But when the movie shifts gears into revenge mode, the transformation is striking. Cage gets to engage full-bore anguish and rage in a way we haven’t seen from him in more than a decade. He’s gained a reputation for “crazy” performances, which is how unobservant viewers process his unabashed emotionality, and this is one of his best recent showcases for that quality. He can’t save the film from an overall middling effect, but he ensures it’s watchable.