Film Review: Going in Style Hasn’t a Whit of Style

Every cliché about “old people” movies is used. D 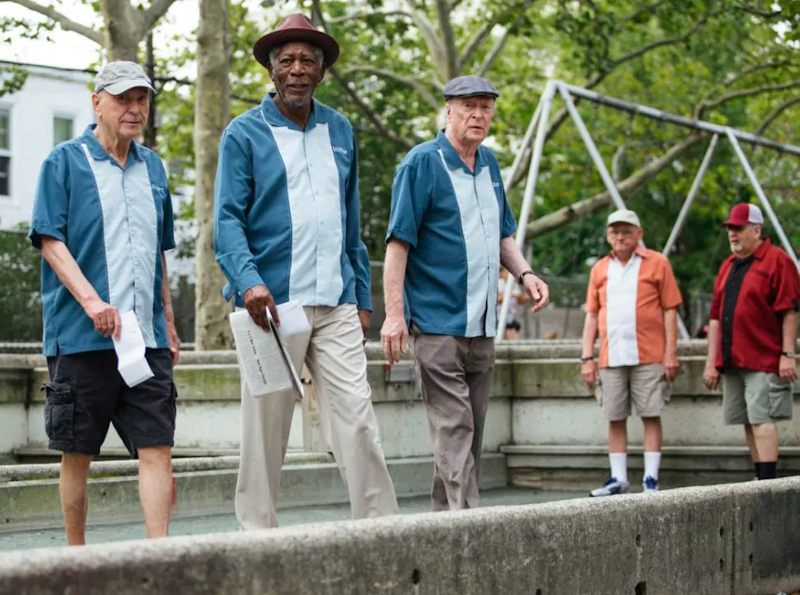 It dawned on me early on in the new “revenge heist” comedy Going in Style that we’re going to get many versions of this movie in the coming years: The average joes rising up against the evil banks, and scheming to steal from the very financial institutions that robbed them of their life savings. And by the time the subgenre peters out, there won’t have been a single good movie, other than last year’s Hell or High Water.

Going in Style, a remake of the heist film of the same name from the late 1970s that starred George Burns, Lee Strasberg, and Art Carney as elderly bank robbers, updates the action for the Trump era. Rather than rob a bank for fun, profit, and alleviation of boredom, as in the old film, the heroes here have been screwed out of their homes and/or pensions, and decide to gain a measure of revenge by robbing the bank that’s responsible for their misery.

Michael Caine, Morgan Freeman, and Alan Arkin play a trio of retirees whose longtime employer has zeroed out their pensions (the bank in question, meanwhile, is “handling” the sale, hence the robbery of the bank instead of the company). Meanwhile, Caine is facing foreclosure, Freeman needs a new kidney, and Arkin—well, I guess his biggest problem is that he’s trying in vain to fend off the amorous advances of a flirty lady (played by Ann-Margret).

“It’s funny ‘cause they’re old” is the driving principle behind just about every frame of this film, and it gets it half-right—Caine is 84, Arkin is 83, and Freeman 79. Even the supporting cast—78-year-old Christopher Lloyd and 75-year-old Ann-Margret—are up there in years too. But they’re not at all funny. This is just plain pure hackery: a bad idea that’s executed poorly at just about every turn.

Going in Style tosses in every single cliché from every comedy about old people since Cocoon. They get stoned! They don’t understand technology! Their movements are scored by hip-hop! At least the movie left out the Reservoir Dogs shot of the characters walking slowly towards the camera, although the trailer left it in. There’s even that obligatory scene where the characters sit around and watch an old movie—in this case, Dog Day Afternoon—that’s sort of similar to the one they’re in, except way, way better.

The movie was directed by sitcom star-turned-indie auteur-turned-hired gun Zach Braff, who brings no style, personality, or wit to the proceedings, although at least this time there’s no subpar indie rock. The screenplay was written by Theodore Melfi, slumming it here after he directed last year’s heavily Oscar-nominated Hidden Figures. There’s some decent, lived-in photography of neighborhood Brooklyn, but the pace is sluggish and some of the set pieces—including a “practice run” where they rob a grocery store, are long and excruciating. It’s also pretty slapdash about the premise. One of the best things about Hell or High Water was that the robbers’ plan was so intricate, so perfect, and so slowly parsed out. In Going in Style, the main inciting incident of the first act—that Caine is about to lose his house—isn’t even mentioned by the third act, and it leaves open a couple of pretty major plot holes. Not even the snotty waitress, played by long-ago SNLer Siobhan Fallon, is as memorable as the T-bone steak lady from Hell or High Water.

The leads’ banter is affecting at times, although this film isn’t going on any career highlight reels for any of the principals. It’s nice to see a few supporting actors who aren’t on screen too much anymore, such as Ann-Margret and Lloyd—and Matt Dillon, playing an FBI agent, doesn’t appear to have aged a day since There’s Something About Mary. And it’s always a joy to see Peter Serafinowicz on screen. There were two things in Going in Style that made me laugh: The woman in front of me, who repeatedly reacted to mediocre jokes by slapping her own knee, and the appearance in the credits of… Secretary of the Treasury Steven Mnuchin, who’s listed as an executive producer, as he is for most Warner Brothers releases this year. Yes, this longtime Goldman Sachs stalwart produced a movie about revenge against evil banks.