Film Review: The Shagginess of Ant-Man and the Wasp 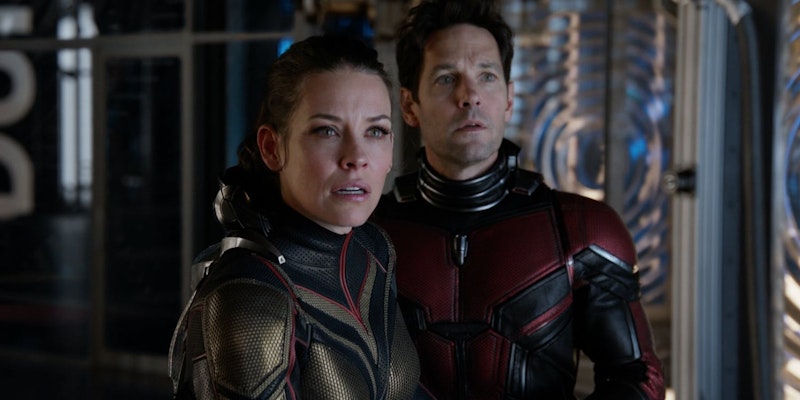 Some installments in the expanding Marvel Cinematic Universe have attempted to mix up the superhero genre, to mixed results. Captain America: The Winter Soldier and Spider-Man: Homecoming were talked up as a 1970s-style spy thriller and a teen movie, respectively, but didn’t do much to distinguish themselves on those fronts, in either story or feel. In contrast, the Ant-Man films stand out among both the Marvel stable and superhero movies in general with their relative humbleness—as humble as $100 million blockbusters can be, at least.

Similarly to the Deadpool series, in both the first Ant-Man and now Ant-Man and the Wasp humor is the prime concern, good action the next, some low-key but nice character work after that, and the business of being a “proper” superhero movie somewhere near the back of the line. (Even with some obligatory ties and references to the wider Marvel sphere of films.) There’s a continual escalation in stakes in this genre, with the imperiled fate of the Earth and/or Universe often eliciting a non-reaction in audiences. Ant-Man and the Wasp is instead mostly about saving just one person, and that more personal connection is refreshing.

Ant-Man (played by Paul Rudd) and the Wasp (Evangeline Lilly) are also engaging leads because their superpowers, based around constantly changing size, forces filmmakers to think beyond the standard boundaries of superheroes throwing or shooting things at each other. When Wasp fights thugs in a kitchen or when the duo gets into a multi-car chase, the viewer is kept on their toes keeping track of the geography of each space and seeing how the heroes maneuver their way through it. This was a treat in the first Ant-Man and is even more fun here, with fresh possibilities provided by the new elements of Wasp’s ability to fly, Ant-Man being able to grow to massive size, and devices which let them shrink or enlarge inanimate objects in addition to themselves. They may not be saving a city, but this visual verve makes their action scenes more thrilling than those of most other superheroes.

The first film established that Janet van Dyne (Michelle Pfeiffer), Wasp’s mother and the co-inventor of the shrinking technology, vanished into the more-micro-than-microscopic Quantum Realm years before. In Ant-Man and the Wasp, her husband Hank Pym (Michael Douglas) believes he’s found a way to retrieve her. This is complicated by the fact that he and Wasp are on the run from the government, and eventually the enlist Ant-Man’s help to get the equipment and intel they need to succeed. Throwing further spanners in the works are several other parties after their tech, including a gang of criminals (led by the always-delightful Walton Goggins) and a mysterious thief with the ability to turn intangible, Ghost (Hannah John-Kamen).

All of the MCU films are packed with Joss-Whedon-style quips to keep things light, but this one goes far beyond that to incorporate honest-to-god physical comedy—a welcome move. People and things shrinking and growing are a consistent source of laughs in addition to action devices. In the aforementioned kitchen battle, Wasp blocks a bad guy from escaping by embiggening a salt shaker, which he blunders into with a hilarious KONK noise. The script (credited to five writers, including Rudd) finds comedy in interaction not by giving characters the same semi-casual sardonic attitude but in bouncing their personalities off one another, such as the prickly Hank and perpetual fuckup Ant-Man, or Michael Peña’s exuberant motor-mouth Luis with pretty much anyone else.

Despite its charms, Ant-Man and the Wasp still suffers from some of the shagginess inherent in the blockbuster model of building plots around pre-visualized action sequences and the associated vagaries of big studio filmmaking. Where the first movie grew better and more assured as it went along, this one has some fits and starts in the pacing. Its plot essentially functions to keep the characters bouncing around between different locations with a sloppy regard for any emotional arc. Pfeiffer is sadly wasted, her screen time not nearly what the prominent billing in the advertising would suggest. Worse off is Laurence Fishburne, playing an old associate of Hank, who has the appearance of an important role but could actually be cut from the film without affecting any of the rest of it. Those problems don’t stop the movie from being a blast, though. Even if you aren’t an MCU fan, the barrier for entry here is low, and the barrier to enjoyment non-existent.