However, terrific performances from Benicio Del Toro and Josh Brolin. B- 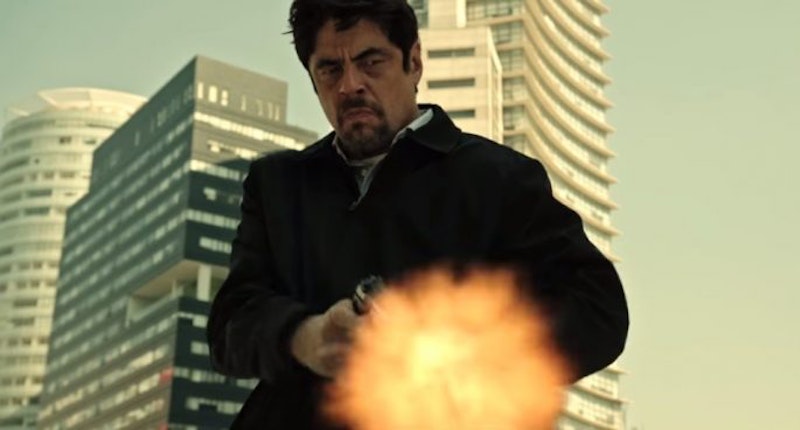 The first Sicario, in 2015, was a strange movie to become a critically acclaimed hit. And its sequel, Sicario: Day of the Soldado, is also strange, arriving in the summer and not the fall, and repeating most of the strengths and weaknesses of the first film.

The new movie subtracts Blunt, focusing on the Brolin and Del Toro characters, with Italian director Stefano Sollima stepping in to replace Villeneuve. And the general takeaway is similar to the first one: The filmmaking and performances are first-rate, but the plot’s lacking, and the film’s overall values are repugnant.

Day of the Soldado is another tale of violence, deceit, betrayal and drug cartels. The plot begins in confusing fashion: Drug cartels have been helping al-Qaeda-style suicide bombers to enter the U.S. and kill Americans. The swaggering secretary of defense (a woefully miscast Matthew Modine) enlists the Jack Bauer-style agent Brolin to solve the problem in a convoluted way: By getting the drug cartels to fight each other instead, and spark a cartel war by kidnapping the 16-year-old daughter (Isabela Moner) of one of the drug lords. The scheme also pulls in Del Toro’s assassin character, who’s seeking revenge against the drug lord, who also murdered his family.

It’s not clear why this would stop the terrorist attacks—wouldn’t the cartels need more money for their war, and therefore continue to take cash from the terrorists?—but needless to say, it all goes awry, leading to Brolin killing a lot of Mexicans.

It’s clear this was a stupid plan, and morally indefensible, but there’s no sense of anyone being held accountable for this. The film should do more to grapple with this issue, but it doesn’t; the worst thing that happens to Brolin is an unpleasant chat with his boss.

It’s also weird that the film starts with a conceit—that Islamic terrorists are crossing the Mexican border in order to commit violent terrorist attacks on U.S. soil—that’s been a right-wing fear-mongering tactic throughout the Bush and Trump eras, even though it’s never actually happened in real life.

Also, while immigration and border crossings are an incendiary issue these days, the film doesn’t really engage them a meaningful way. There’s one reference to family separation that drew nervous groans in the audience when I saw the movie, but that passes quickly.

My other big complaint about the new film is that the daughter gets a great introduction, but then spends the rest of the film merely as a victim/bystander. It’s a waste of what could have been a fine performance, and part of the film’s tendency to give short shrift to its Mexican characters. Even the main drug lord character, who put the whole plot in motion, remains unseen.

There is a lot to like here, starting with the two lead actors, who continue to bring it constantly in all sorts of films. The look and feel of the picture is excellent, mostly keeping with the style of the original film, while there are some nifty action sequences, especially a south-of-the-border chase scene. And there’s one really outstanding scene, featuring Del Toro talking to another character in sign language, that’s genuinely moving.

The Mexican border stand-off will likely get cinematic treatment sooner rather than later; whoever tackles that can learn from the successes, and pitfalls, of the two Sicario movies.