Identifying with the monster in The Little Shop of Horrors. 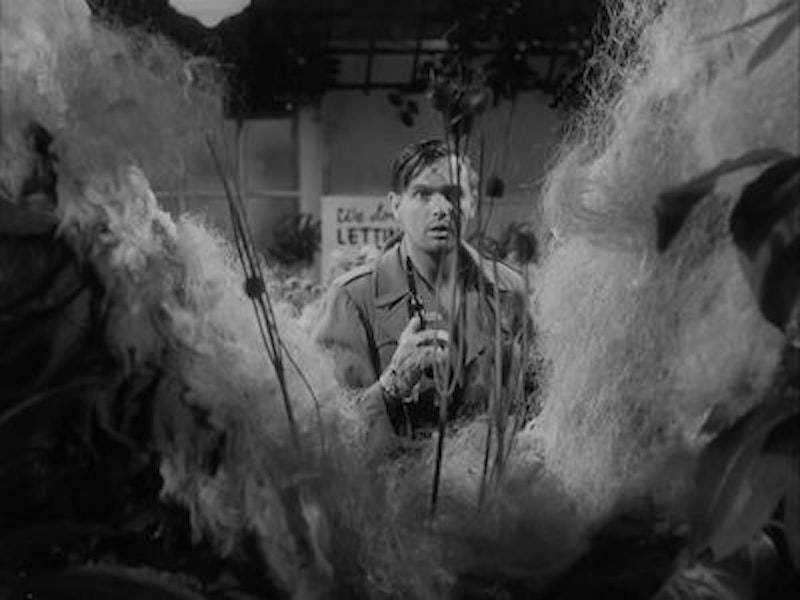 This is part of a series of posts on 1960s comedies. The previous post on The Pink Panther is here.

Usually in contemporary Hollywood dramas or action films, you're supposed to identify with the protagonist: it's fun to imagine yourself in the action pose of someone who defeats the villain and gets the girl (or occasionally the guy.) Characterization is almost beside the point; heroes are as often as not annoying jerks and/or bland ciphers. But who cares about likability when you're there for the empowerment fantasy? You watch to imagine yourself overcoming and winning.

Comedies sometimes work like this as well; Deadpool 2, for example, functions much like an action movie with gags. But often what makes a film a comedy is the way it undermines or mocks expectations of identification. That's the case in Roger Corman's odd 1960 black comedy The Little Shop of Horrors, in which you're arguably supposed to identify with the carnivorous plant.

The putative protagonist of The Little Shop of Horrors is Seymour Krelboyne (Jonathan Haze) a hapless floral assistant in the shop of Gravis Mushnick (Mel Welles). Seymour’s a helpless bumbler who can't even cut grenadines, and Mushnick is ready to fire him. But the assistant has found an odd, ugly, but unique Venus-fly trap type plant, which he names Audrey Jr., after Mushnick's other assistant Audrey (Jackie Joseph). Seymour discovers that the plant feeds on blood, and as it grows to an enormous size, it becomes a popular attraction. It also starts to speak, and demands more and more food. Seymour ends up killing people more or less by accident and feeding them to the plant. Finally, two detectives uncover the nefarious goings on, and after a long, pointless chase, Seymour sacrifices himself to the plant, stabbing it to death with a knife as it digests him.

Little Shop of Horrors is built around a Horatio Alger type conceit; Seymour’s at the bottom of the capitalist ladder, but he hopes to rise through hard work and horticulture. The movie, though, never firmly settles on putting you in Seymour's stumbling shoes. Instead, Little Shop begins with a Dragnet-like intro from Sergeant Joe Fink (Wally Campo) who dryly warns about the perils to come. By using cop show tropes, the film half-heartedly frames the police as protagonists, even though they barely appear. It also presents Seymour as the villain—a murderer from a deviant immigrant community who must be tracked down and punished in order to preserve law and order.

Seymour's exact ethnic background is uncertain, but his boss, Mushnick, is clearly identified as Jewish, both by his accent and by his enthusiastic penny-pinching. The film makes fun of Mushnick, who often mangles his English. But it also gives him a lot of screen time. It's significant that you meet Mushnick, puttering around his shop, before you meet Seymour, so you see the clumsy assistant initially from his boss' exasperated perspective. Similarly, perhaps the most outright gory scene of the film is shot from Mushnick's viewpoint, as he comes into the shop at night and sees Seymour feeding a severed foot to Audrey, Jr. Seymour may be striving and achieving in his own mind, but from where Mushnick is standing, he looks like a monster.

As the narrative goes on, the identification between Seymour and his growing plant becomes more insistent. The first time Seymour kills it's an accident; he throws a stone and happens to hit a railroad detective. But the second time he does it deliberately. He gets a toothache, but the dentist he sees is sadistic and borderline insane, and Seymour has to stab him to protect himself. Seymour then takes the dentist's place, pulling teeth from a masochistic client (played by a very young Jack Nicholson). The whole sequence is a kind of bizarre parody of empowerment, with Seymour confusedly wandering from victim to victimizer, before dragging the dentist to Audrey Jr. for dinner.

Later in the film, Seymour is courting Audrey as the two sit alone in Mushnick's flower shop. The two are discussing wedding plans and, significantly, future dreams—they want to be wealthy, travel and live the American empowerment fantasy success story. But they’re interrupted by Audrey Jr. demanding, "FEED ME!" Seymour doesn't want Audrey to know that the plant can talk, so he pretends that the voice is his, leading Audrey to conclude that he's making some sort of cruel joke, and stomps away in a huff.  Later, the plant actually hypnotizes Seymour, sending him out to find a new victim. He ends up kidnapping a prostitute (Meri Welles).

Seymour's lust and desire—for Audrey and others—is displaced onto, or conflated with, the plant's hunger. When Seymour desires women, Audrey Jr. declares "I'M HUNGRY!" In fact, you can see Audrey Jr. as all of Seymour's desires, not just lust, made manifest. The shop assistant has ambition, and when he feeds those ambitions with other's blood, the plant grows, demanding more and more.

Seymour’s an innocent doofus who wants to make good. But turning the little shop into a big shop with you as proprietor leads to horrors. You could see this as a critique of the Horatio Alger myth, presenting the quest for success as a grotesque, alien hunger. Or the film could be a paranoid fever dream about the possibility of immigrants getting their tendrils into American enterprise. Most likely, it's both, obliquely mixing anti-capitalism and anti-Semitism in a familiar hybrid. Xenophobia thwarts the usual process of identification, and so the film sees empowerment not as fun or exhilarating, but ugly and disturbing. The wrong thing is growing stronger.

At the end of the film, Audrey Jr. opens several enormous, ominous blooms. Each one contains the impression of the face of one of the people it has eaten—including an image of Seymour's face. The individuals on screen aren't as much characters as severed, terrified images. The film encourages you to see Seymour as part monster, which also means it encourages you to see him from the perspective of the monster. Seymour's success doesn't empower you. Instead it's a queasy reminder that you’re either the devoured or the devouring.