Too much exposition and mumbo-jumbo. F 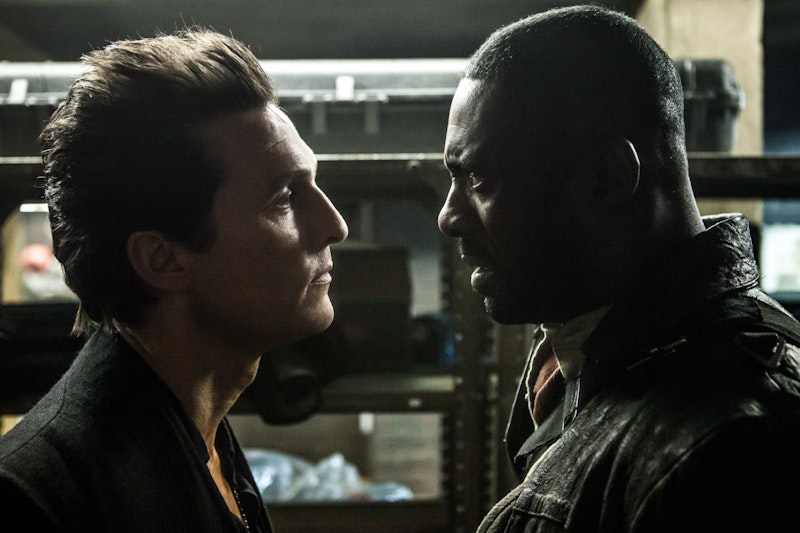 The new movie version of The Dark Tower is a good argument for the notion that sometimes books can’t be filmed. This adaptation of Stephen King’s multipart volume is a huge failure for many reasons. It sports what are likely career-worst performances from its two leads, Idris Elba and Matthew McConaughey. Its visual style is muddied, hard to follow and just generally ugly. But worst of all about The Dark Tower is that it’s got way too much story, and endless exposition, in too short a time period. It spends so much time explaining itself that it doesn’t even have time to be a movie.

The Dark Tower attempts to squeeze an almost laughable amount of world-building into a 90-minute running time. There are multiple locations on at least two different planes of existence, as well as a lot of mumbo-jumbo about portals and special powers. If you haven’t read the books (note: I haven’t) none of it makes a lick of sense, but if you have, you’re likely to walk away unsatisfied.

Based on various elements from King’s eight Dark Tower novels, the film depicts a multidimensional battle between good and evil. Elba plays the hero, Roland, a “gunslinger” meant to protect the universe from McConaughey’s Satanic Walter. Young Tom Taylor plays Jake, a boy who has horrifying dreams about this battle, and ends up in the middle of the action. Hanging over it all is a “Dark Tower,” which will unleash demonic hell if it ever collapses.

I don’t normally advocate that bad movies be longer, but The Dark Tower is squeezing way more material into 95 minutes than there’s room for. Also, the tonal shifts are whiplash-inducing, including a couple of moments of comedy that just don’t fit. A notable and surprising weakness is the acting. Elba keeps getting cast as an action star because he looks the part, but his best work (The Wire, Beasts of No Nation) has always been away from that genre; a role like this is beneath him. As for McConaughey, very few actors are as skilled at spouting nonsense dialogue and making it sound profound, whether it’s True Detective or those Lincoln commercials. But not even he can avoid sounding like an idiot saying some of the things this role requires of him.

The Dark Tower project has been developmental hell for years, with directors from J.J. Abrams to Ron Howard attached at various times, as well as thoughts that the material might work better as a TV series. The version that was ultimately made, by director Nikolaj Arcel, was beset by behind-the-scenes infighting. Trailers and TV commercials barely showed any footage and the film was shown to critics at the last minute. Movies in the past have faced that many red flags and still ended up not that bad. The Dark Tower is that bad.

Landline is a film that looked really great on paper. It’s the reunion of the immensely appealing actress Jenny Slate reuniting with director Gillian Robespierre, with whom she worked on the outstanding comedy Obvious Child, three years ago. It’s a family comedy, set in mid-1990s New York City, with John Turturro and Edie Falco playing Slate’s parents. Unfortunately, a lot goes wrong.  Landline fails to land its two most important elements: an inert love triangle plot, and a period setting that’s never quite worth its awhile. Newcomer Abby Quinn does outstanding work as Slate’s younger sister, and Turturro and Falco are both good, but overall there’s not really not much there.

The setup is that Slate is in her 20s and engaged to Ben (Jay Duplass), the kind of Ben Stiller-like boring nice guy who always seemed to get the girl in the movies and TV shows of the period. Quinn, very much a lookalike, is her sister, a possibly troubled high schooler. Turturro and Falco are the parents, and the plot is driven by the two daughters suspecting that their dad is having an affair—and Slate herself growing closer to an old college boyfriend (Finn Witrock).

As good as the main cast is, there just isn’t much to this story. The affair plot is never especially interesting, nor does Slate have especially good chemistry with either of her male suitors. In Landline, set in 1995, the period setting is somewhat understated. There are no cell phones, and the fashions are pretty ’95-specific, but aside from that, not much grounds the film in the 90s. There’s surprisingly little vintage music featured, which would’ve been nice for those of us who lived through that era. The recent Netflix show Friends From College may have been a disappointment in most ways, but it least it busted out great 90s tunes in just about every episode.

I’m a Jenny Slate fan, as she’s done first-rate work in everything from movies to sketch comedy to viral online videos. She’s even a really outstanding podcast guest. She’ll eventually have a breakout movie, but Landline isn’t it.