Film Review: Detroit Is a Chilling Look at the 1967 Riots

That Kathryn Bigelow and Marc Boal are white is mostly irrelevant. A- 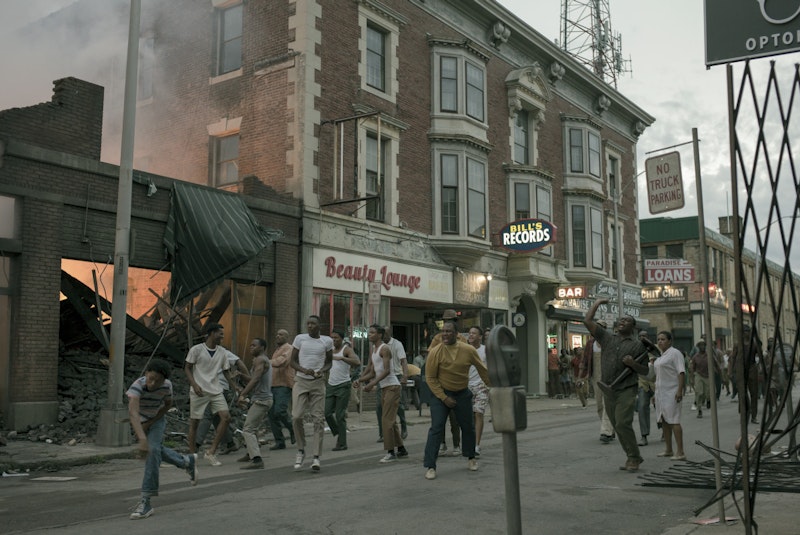 Director Kathryn Bigelow and screenwriter Marc Boal, the team behind two of the best films of this century (The Hurt Locker and Zero Dark Thirty), have returned with Detroit, a harrowing drama that’s difficult to watch but nevertheless a significant cinematic achievement.

The film is about the 1967 Detroit riots, and more specifically the horrifying Algiers Motel incident, in which a group of young black men were tortured by a group of white police officers, who killed three of them. Released on the occasion of the 50th anniversary of these events, Detroit has very clear relevance today, even before we get to the part about a hideously unfair jury trial.

Detroit starts with the riot itself, until spending the bulk of its running time at the Algiers. The camera work is somewhat jittery in the early going, although it gets clearer once the story moves to the Algiers. There will be much that infuriates you, even beyond the actual torture and violence. There’s the part when a police officer kills a man who’s running away from him, is told by his superior officer that murder charges will be recommended, and then is sent back onto the streets the same day. There’s the moment when one federal agent points out that Detroit police are inside committing gross civil rights violations but that because they don’t want to deal with the bureaucracy of a civil rights case, they’d rather not intervene. Both of those decisions, and many others, led directly to people dying.

Detroit is a rough watch, and I don’t begrudge anyone who chooses to skip seeing it for that reason.

The cast is full of heartbreaking performances. There’s young actor Algee Smith as Cleveland Larry Reed, an Algiers survivor whose story Boal tracked down and helped uncover. Anthony Mackie plays a recently returned soldier, while Jason Mitchell (Easy-E in Straight Outta Compton) shines as a young hothead. John Boyega (Finn from The Force Awakens) gives a quietly intense performance as a security guard who finds himself caught in the middle of the events.

Then there’s the turn by Will Poulter, an odd-looking English actor I’ve never been impressed with, mostly in dopey comedies like We’re the Millers. Movies about racism often make the mistake of making one character the avatar of all racist evil, and while that doesn’t quite happen here, Poulter is downright terrifying.

Detroit does a lot that movies about the horrific racism of the past are supposed to. It brings to light a story that’s been historically ignored. It finds obvious echoes in the present day, without hammering the audience over the head with the parallels. It doesn’t copy the Cry Freedom/Mississippi Burning/Ghosts of Mississippi motif—there’s no centering of white characters, no telling the story through their eyes and no interpreting the historical events primarily as a moment of growth for white people. It also doesn’t end on an incongruous note of positivity or hope.

Detroit is an unambiguously anti-racist movie. In the depiction of Boyega’s Melvin Dismukes character, it makes a thorough argument against what’s often these days called respectability politics. And at a time when even the most innocuous criticism of policing is slammed in some quarters as verboten at best and incitement to violence at worst, the film depicts police officers, nearly to a man, as sadistic, racist monsters.

When I saw the film two weeks ago, I assumed it would be controversial for that reason. Boycotts and mass outrage have been launched for a lot less. Remember two and a half years ago, when police unions throughout America threatened to ruin Hateful Eight because Quentin Tarantino made some innocuous pro-Black Lives Matter comments?

I figured that by this week Tucker Carlson would be railing nightly on Fox News that Detroit was a vicious attack on every cop in America, one certain to lead directly to the cold-blooded murders of police officers. Or maybe National Review or Washington Free Beacon would try to float the contrarian view that the police were actually the heroes of the film.

But instead, the bulk of the Detroit controversy has been about something else: That this film about anti-black racism was directed by Bigelow and written by Boal, both of whom are white. It’s therefore “not their story to tell.” I’ve heard that the Bigelow/Boal team is untrustworthy because of various political heterodoxies of The Hurt Locker and/or Zero Dark Thirty. I’ve heard the argument that this film doesn’t offer solutions or remedies, as if 12 Years a Slave or Schindler’s List did. I’ve even heard it compared, ludicrously, to Stanley Kramer’s “issue pictures” from the 1960s, as though Detroit were a heartwarming, feel-good, anti-racism tale for white people in the tradition of Guess Who’s Coming to Dinner.

If you’re going to say that Bigelow and Boal have no business, as white people, making a movie about the Detroit riots, you need to show, based on the work itself, that Bigelow and Boal got this, this, and this wrong, and that their whiteness is the reason. I’ve yet to hear anyone do this, mostly because it exemplifies the “criticize the film without seeing the film” school of film criticism, very popular these days on Twitter. It’s grossly unfair to the film, and to the filmmakers.

I’m glad there’s a Selma and a 12 Years a Slave. I believe that both films are superior to Detroit, and wish there were more films like them. But I’m glad Detroit exists, too. And the notion that any filmmaker doesn’t have the right to make a particular film is an attitude that’s fundamentally at odds with what art is.

Arriving just days after Donald Trump openly advocated police brutality—to the applause of rank-and-file officers in the audience—Detroit is vital, necessary and timely.