Ozark Is the New, But Not Improved Breaking Bad

It works in the crime drama genre but can't rise to the next level. 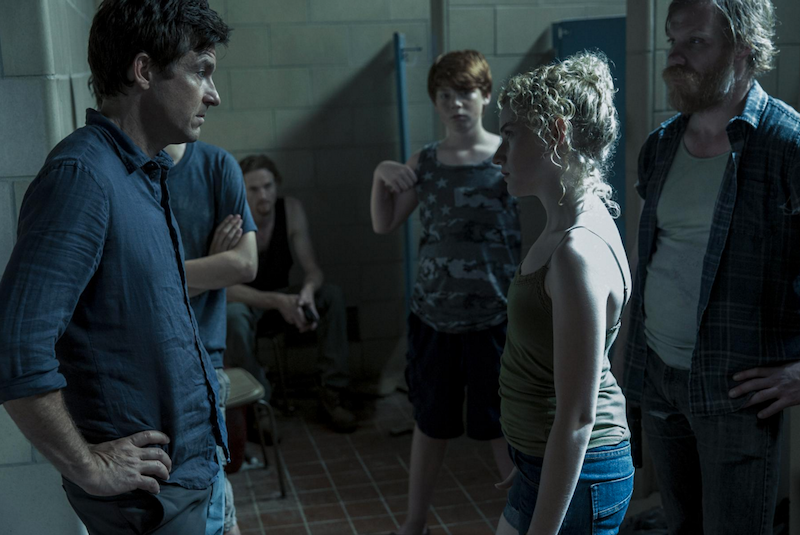 Netflix’ new 10-episode dramatic series, Ozark, is the latest installation in that sub-genre of television crime series from the streaming networks depicting families that are mostly normal except that one or both of the parents are serious criminals outside of the confines of the home. The Sopranos kicked off this trend, demonstrating that incorporating the everyday family life of a certain kind of criminal can serve as an entertaining enhancement to the story. The duality of a parent who does the normal things at home with the kids before leaving the home to commit felonies is provocative and satisfying in a way. We’re assured, once again, that even some of the most flawed people can have a human side.

Breaking Bad also fits under this rubric, as does FX network's high-quality spy series, The Americans. Marty Byrde (Jason Bateman, who also directs some episodes) is the criminal/parent in Ozark, and viewers are given a glimpse into his dark side in the first scene in episode one. Byrde is a financial advisor who’s talking to a naive couple who’ve come to his office seeking investment advice. As he sits at his desk and nods his head faux-attentively, he’s sneaking furtive glances of a video on his computer of his wife having sex with another man. Soon we learn just how good Marty is at projecting his regular-guy, ingratiating persona to manipulate the unsuspecting.

Byrde’s criminal specialty is money laundering, which is somewhat difficult from a dramatic point of view. Compare the technical act of cleaning up dirty $100 bills to Tony Soprano having people whacked, high school teacher Walter White cooking up meth in the desert, or Elizabeth and Philip from The Americans engaging in anti-American espionage while disguised as a typical suburban couple and it doesn't quite measure up in terms of impact.

Marty got seduced into a life of crime by Del (Esai Morales), a drug lord who works for the second largest cartel in Mexico. Byrd’s wife Wendy (Laura Linney), unlike Walter White’s wife in Breaking Bad, has given her unreluctant consent for his criminal turn. Del subsequently catches Byrde’s business partner stealing from him and ends his life with a bullet to the head. Marty talks his way out of taking the next bullet and being dissolved in a barrel of acid by some fast talking about how he can relocate from Chicago to the lake region of the Missouri Ozarks and launder cash like crazy for the cartel. One thing Marty does really well is talk.

The Byrdes, with their two children, Charlotte and Jonah, then move to Missouri so Marty can get busy. Del’s given him a hard deadline for laundering $8 million in cash. The frenetic pace Marty’s forced to work at becomes a critical element driving the plot and giving it tension. Marty and Wendy buy a house that comes with the odd stipulation that the dying old man who owns it must be allowed to stay on and occupy the basement until he expires, dropping another plot element into the mix.

One of the main story lines in Ozark springs from the culture shock the Byrde family experiences as city slickers dropped out of nowhere into the backwoods of the Missouri Ozarks. As it turns out, there're some hayseed criminals there who aren't thrilled with the new arrivals. Marty’s got two new crime families in the Lake of the Ozarks summer resort area to contend with, as if having a Mexican cartel breathing down his neck and threatening to wipe out his entire family wasn't enough.

Unsurprisingly, Marty doesn't sleep much. Instead he goes about his task with steely determination, seeking to partner up with local small business owners he can dupe into helping him get his drug money into bank accounts. A gay, undercover FBI Agent Petty (Jason Butler Harner), who's obsessively focused on bringing Marty Byrde down, comes to town and seduces a closeted hillbilly criminal who’s also gunning for the newly-arrived white-collar criminal from the big city. This part feels forced, as if the show's writer, Bill Dubuque, couldn’t resist throwing a Deliverance-style plot element to spice things up. The gay hillbilly angle, however, does little to advance the storyline.

Bateman’s Marty, while an effective onscreen presence, lacks Tony Soprano’s charisma, Walter White’s fierce intensity, or the ideological fervor of the Russian spies Philip and Elizabeth. At least we know why those four chose the wayward path in life. Marty Byrde didn't grow up around Italian-American criminals. He doesn't need cash to beat a deadly disease, and he's not driven to help his country win the cold war against the U.S. Marty Byrde’s just a guy making a good living in a failing marriage who thinks it's a good idea to put the lives of his family at risk by getting into bed with a Mexican cartel so he can make the big bucks. Why he's compelled to do this the viewer doesn't know, which leaves a hole. The only clue we’re given is in Marty’s voice-over at the very beginning of episode one, when he says that money is “the measure of a man's choices.”

Watching Marty set up his money laundering schemes isn't riveting. Ozark has borrowed too heavily from other sources that are readily identifiable to stand on its own. One of the series’ plusses is its strong female characters, including Laura Linney’s character, but in particular Ruth (Julia Garner, who also appeared in The Americans), a small but menacing 19-year-old who has untold potential for mayhem. Garner commands the screen any time she's in a scene. And while it may seem inconsequential, Ozark doesn't have a long opening sequence for each episode, thus sparing the viewers. Let's hope this starts a new trend. Ozark will do for now if you're jonesing for another anti-hero story, even if it lacks any semblance of humor, but it suffers in comparison to its influences.