The happy black comedy of Billy Wilder's One, Two, Three. 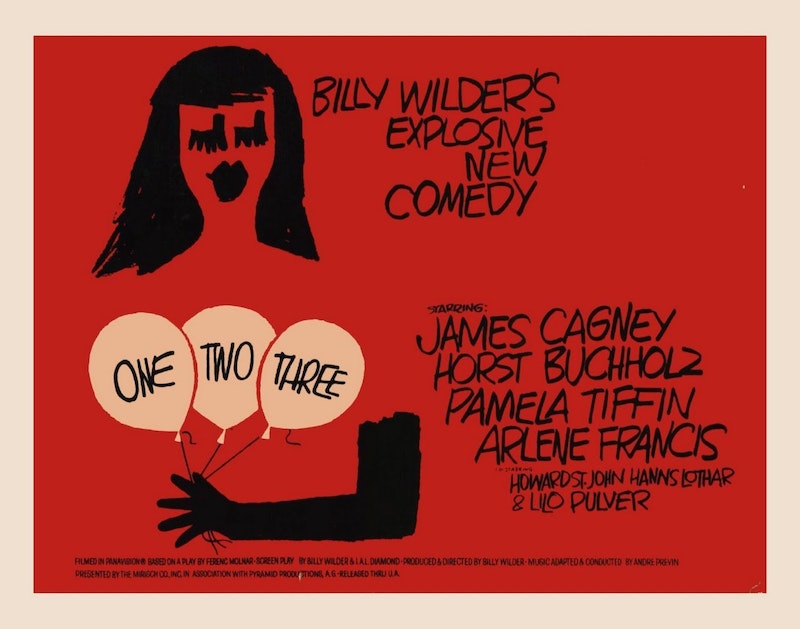 This is part of a series of posts on 1960s comedies. The previous post on The Little Shop of Horrors is here.

"Is everybody in this world corrupt?" shouts a tormented young idealist in 1961 Cold War comedy One, Two, Three.

That cheerfully innocent cynicism is Billy Wilder's trademark. Characters in his films betray their ideals and their marriage vows with decadent aplomb, and a minimum of consequences. In content, Wilder is a satirical black comedian, but his tone is all sweetness and froth. Corruption isn't an existential dilemma; it's an amusing delight, reliable and yet always fresh and new.

One, Two, Three is a quintessential Wilder film in that it doesn't just revel in the hollowness of one ideology, but of three. The movie is set in the divided Berlin, and makes fun of capitalists and communists equally, with a few sideswipes at fascism for good measure.

The protagonist of One, Two, Three is C.R. MacNamara (James Cagney) head of Coca-Cola in Berlin. Mac has ambitions to run the company’s entire European production. He's working on setting up bottling plants in the Soviet Union, when his boss, Wendell Hazeltine (Howard St. John) calls from Atlanta, telling him to stop everything and look after his flighty 17-year-old daughter, who’s arriving in Berlin immediately. Scarlett Hazeltine (Pamela Tiffin) is a vacuous collector of fiancés, and sure enough she falls for the most inappropriate man available: Otto Ludwig Piffl (Horst Buchholz), an East German revolutionary true believer.

The two secretly marry; if Scarlett's daddy finds out, it's the end of MacNamara's career. So he arranges for Ludwig to be taken by the East German police and to have the marriage annulled. Unfortunately for him, it turns out that Scarlett is pregnant, so he has to concoct a new plan — breaking Piffl out of prison, and transforming him into a perfect son-in-law with an (adopted) noble father and a position as head of the local Coke bottling plant.

Much of Wilder's fun is at Otto's expense, the dashing, handsome brooding and ludicrously earnest comrade. Otto's fire sweeps Scarlett off her feet; he calls her a bourgeois parasite and she falls in love. As she gushes to Mac's wife Phyllis (Arlene Francis), "Have you ever made love to a revolutionary?" ("No, but I once necked with a Stevenson Democrat," Mac's wife Phyllis replies.) He waxes poetic about whisking Scarlett away to a Soviet-assigned "magnificent apartment, just a short walk from the bathroom," and living their days in Spartan fervor.

But for all his bluster, Otto doesn't understand East Germany as well as Mac. As a result, the capitalist manipulates the Communist with blustery ease. Mac surreptitiously straps a "Ruski go home" balloon to Otto's motorbike, and inevitably the young firebrand is arrested and tortured into confessing to be a spy. (The torture consists of being forced to listen to "Itsy Bitsy Teeny Weeny Yellow Polka Dot Bikini" over and over.) When Mac realizes Scarlett is pregnant and he needs Otto back, he breaks him out by offering some Soviet officials the services of his mesmerizingly swaying blonde secretary and umlaut-laden mistress Fräulein Ingeborg (Liselotte Pulver). Mac knows Communists are just as avaricious and driven by appetite and vanity as capitalists, and he makes the most of it.

Capitalists, though, are often as hypocritical and deluded as Communists. Mac thinks that his devotion to his job and savvy deal-making will help him climb the corporate ladder; if he can open the U.S.S.R. to Coke, he enthuses, his fortune is made. But his rabid anti-Communist boss doesn't care about the Soviet deal. Mac's promotion depends not on his business skills, but on baby-sitting Scarlett. And even that doesn't really work for him. After Mac transforms Otto into a bourgeois capitalist, complete with bowler hat and new underwear, Mr. Hazeltine is so happy with his son-in-law that he gives him the position as head of European production that Mac was longing for.

The capitalist side of Berlin isn't exactly freer than the Communist side either. Otto was arrested in East Berlin for having an anti-Russia balloon. By the same token, American military police search the Coca-Cola offices after being alerted that a woman was seen carrying around balloons with anti-Yankee slogans. More, Mac's assistant Schlemmer (Hans Lothar) compulsively clicks his heels together in Nazi fashion whenever Mac gives him an order. Schlemmer insists that he wasn’t in the army and doesn't even know who Adolf Hitler is, but he obviously protests too much.

Totalitarianism is hardly confined to East Berlin. It's just that those totalitarians over there are the enemy, and we've decided these ones over here are friends.

Wilder's live-and-let-live portrayal of post-War Nazis is remarkable considering his history; Nazis murdered his mother, grandmother, and stepfather, and forced Wilder himself to flee Austria. It fits, though, with the director's general stance of open-hearted amorality. Some people cheat on their wives; some people have a Nazi past—everyone in Wilder’s world is corrupt (or at least everyone he's met), so why fuss about it? Injustice and evil are the human condition. Best to enjoy the ludicrous spectacle.

One, Two, Three is today viewed as a classic, but it did poorly upon its release. It came out shortly after the Berlin Wall went up, and Communist oppression didn’t seem funny to theater audiences. Similarly, right at this moment in American history, it's hard to look with jaded benevolence on fascists. Nonetheless, even in our current political mess, you can hear a poignant edge to Cagney's stentorian rapid fire bellowing. The film provides an oddly utopian glimpse into a world where nobody actually believes the hate they spout. Someday, Wilder says, we can all live in harmonious crass self-interest together, expecting nothing from anyone except foolishness and delightful mendacity. Just close your eyes and count one, two, three.