Whatever you think about Damien Chazelle, he knows how to end a movie. B 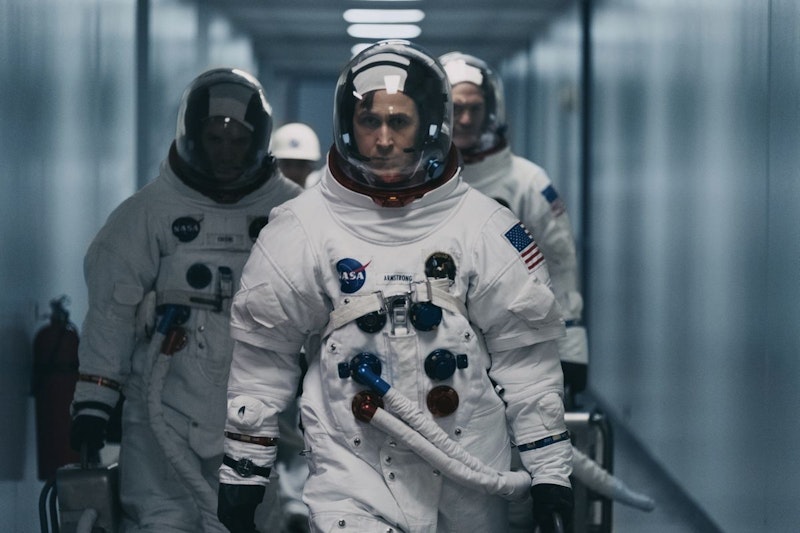 Whatever you think about Damien Chazelle, he knows how to end a movie.

The director, who has emerged in recent years as a divisive but essential filmmaker with Whiplash and La La Land, topped off both of those pictures with breathtaking, outstanding endings. In his new Neil Armstrong biopic First Man, a chronicle of the quest to land on the moon, he tops both, with a third act that lives up to the event that it's chronicling.

First Man is Chazelle’s follow-up to La La Land, a great film from two years ago that suffered a bitter backlash that it didn’t deserve. Now, Chazelle has upped the stakes in gravitas and ambition, while not quite reaching the heights of his previous collaboration with Ryan Gosling. Written by Spotlight and The Post screenwriter Josh Singer and based on James R. Hansen's Armstrong biography, First Man follows events familiar to most space program buffs, whether or not they’re old enough to have lived through the events in question. We see Armstrong (played by Gosling) in his early career as a civilian engineer, as well as the role he played in the Gemini and Apollo programs, stepping in as the leader of the Apollo missions following the death of Gus Grissom in early 1967.

We see Armstrong mourning both his cancer-stricken young daughter and various astronaut friends who lost their lives in the early missions, including neighbor Ed White (Jason Clarke.) Throughout he's supported by his wife (Claire Foy), who despite what the trailer, doesn’t spend the entire film berating her husband.

But then he goes to the moon. And what Chazelle and his team do with this sequence, in both pacing and aesthetics, equals any stretch of any movie this year. It's what everyone going to see the movie came there for, and it doesn't disappoint. The moon landing itself, and the other space sequences, don't really look like space movies of the past—you can see Chazelle going to great lengths not to actively lift shots from 2001: A Space Odyssey, Gravity or The Right Stuff.

I was reminded a bit of Sully, Clint Eastwood's movie from two years ago about pilot Sully Sullenberger and the flight he landed on the Hudson. Even though every person watching the film, in both instances, knows exactly how everything is going to turn out, the presentation of the "main event" is nothing short of perfection. The film surrounding it, though? Somewhat less so.

One, First Man isn't nearly the large-scale visual marvel of, say, Gravity. Aside from the two or three minutes on the moon itself, there's nothing especially awe-inspiring from a visual standpoint. There's really no need to shell out in order to see First Man on an IMAX screen, even though it was shot in part with IMAX cameras. There's also an overuse of extreme close-up and too much shaky-cam.

We don't get much insight from the film of who Neil Armstrong was as a person; Chazelle’s content to chalk him up as a Greatest Generation type who was distant, silent, and didn't have much to say, especially to his children. And while Apollo 13 established that Jim Lovell's greatest dream in life was to go to the moon, we don't get the sense that Armstrong cared one way or another.

Gosling is fine as Armstrong, but this isn’t one of his best performances. Foy is better, and she may actually speak more in the film than her on-screen husband does. As for the supporting cast, Kyle Chandler is right at home as Deke Slayton and Corey Stoll is a hoot, playing Buzz Aldrin as an ornery son of a bitch. But most of the cast in the NASA side of the film is great actors playing famous astronauts (Pablo Schreiber as Lovell, Shea Whigham as Grissom) who aren't given much to do. Clarke, ironically, appears in First Man the same year he starred in Chappaquiddick, which covered events that took place the same week as the moon landing.

And despite welcome use of Gil-Scott Heron's "Whitey on the Moon," the film remembers for exactly two minutes that there was a counterculture going on in 1969, and not for a single moment either before or after. One reason not to object to First Man is this stupid controversy over the film's decision to leave out the planting of the American flag on the moon. This is an old-fashioned film that mostly celebrates old-fashioned values, with American flags all over the place, and the decision makes perfect sense once you realize the emotional climax that's used instead.

For all the complaints I have about First Man, none are enough to negate the power of that centerpiece sequence, or to make me recommend against seeing the film. But if the Chazelle film once again ends up in a two-way race for Best Picture, against A Star is Born, I’ll be rooting for the latter.