The director’s follow-up to La La Land works despite his militaristic attitude toward art and masculinity. 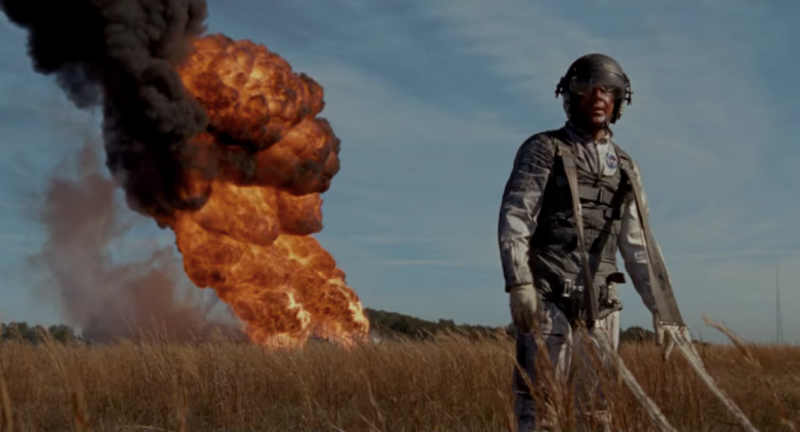 I’m still suspicious of Damien Chazelle. Whiplash, his 2014 breakthrough, is one of the worst movies I’ve seen this decade: so cruel and militaristic in its attitude toward music and musicianship, with an absurdly out-of-place ending that might’ve worked for Schwarzenegger but not a music student. It also starred Miles Teller, an actor so off-putting and uncharismatic he makes Caleb Landry-Jones look like Ryan Gosling. The latter’s lead in Chazelle’s follow-up to La La Land was originally meant for Teller, but luckily, Chazelle abandoned his “bro” once he met an actor that didn’t have the mashed-in face of a fraternity psychotic. La La Land didn’t win Best Picture but otherwise it cleaned up, with Chazelle becoming the youngest person yet to win an Oscar for Best Director.

Once again, I was and remain suspicious of Chazelle’s attitude and outlook, so I watched La La Land two years ago with my arms crossed, enjoying it for what it was but agreeing with every criticism that it was too square, blinkered and white. But I can’t deny the ending of that movie, a virtuosic sequence of pure cinema so stunning that it not only justified but elevated the rest of the film. For all its whitewashing and pedestrian views on art and “authenticity,” the ending makes it clear that this was always the story of two people and for once, the director’s opinions on the world at large are invisible, as highly stylized and maximalist the movie is.

First Man is considerably drier than Chazelle’s previous two films, and better for it. Gosling returns, playing Neil Armstrong, an emotionally-stunted brainiac who can’t get over the death of his infant daughter in 1961, even at the expense of his other two kids, sons who Armstrong couldn’t give the time of day. His wife Janet (Claire Foy) confronts Armstrong toward the end of the movie, right before Apollo 11 is about to take off. Armstrong hasn’t told his sons where he’s going or that he might not make it back. Chazelle fetishizes the “strong silent type” he thinks Armstrong is, without ever realizing that maybe he’s just a shitty father.

Still waters run deep, yes, and this is not always a virtue, particularly as a parent. But Chazelle has already demonstrated his masochistic conservatism with the contemptible ending of Whiplash, the all-white Los Angeles of La La Land, and even earlier in First Man, when a montage of anti-NASA archival footage is shown just to demonstrate how weak and cowardly the counterculture was compared to the honorable men of very few words working on the Apollo missions (except Buzz Aldrin, appearing only briefly but played hilariously by Corey Stoll). Chazelle likes toughness, masculine “greatness,” and only “proper” displays of emotion and emotional interiority (i.e., tightly wound and repressed until it explodes).

As far as the lack of a flag-planting scene goes, the moon landing is inextricable from the politics that proceeded it and made it possible. Gosling’s explanation, that they wanted to portray the landing as a “human achievement… transcending countries and borders”, is either disingenuous or genuinely ignorant, as the film takes a clear nationalistic and conservative view of the space race and the events surrounding it. While I liked First Man, I enjoyed Richard Brody’s scathing indictment of the film as a “right-wing fetish object,” and I agree that the footage of NASA dissenters betrays Chazelle’s crew cut conservatism: “With this sequence, Chazelle openly mocks people who thought that the moon money was spent foolishly—those pesky intellectuals, blacks, and Hispanics who go on TV or into the street demanding ‘gimme’ while the likes of Neil and his exclusively white, male colleagues uncomplainingly put their lives on the line to accomplish historic things in the interest of ‘mankind.’”

But First Man works despite its director’s suspect ideology. Tonally it mimics the quiet dignity of Armstrong himself, and it’s as much as a first person narrative as Taxi Driver or Synecdoche, New York. Those films portray a reality distorted and elided by their protagonists to the point of delusion and fantasy, and First Man takes no such liberties—but its silence, tunnel vision, lack of dialogue, and its ending make the film’s perspective clear. We’re seeing the 1960s through the eyes of Neil Armstrong, and a lot of that decade is left out. His family and his friends are left out. He’s unable to express his grief in front of others, and is so tightly wound that when he hears that three of his colleagues have been killed in a freak accident, he unconsciously breaks a wine glass in his hand and says nothing. So brave.

Even when he gets to the moon, he flashes on his departed daughter and throws her bracelet into a crater with not so much as a word or even more than a single tear. First Man is not the story of mankind’s accomplishment or a nationalistic rallying cry for America and against Russia and the counterculture, but the story of one man and his interiority, which feels as vague, vast, and inhospitable as the moon itself. Chazelle’s most contemptible ideas are kept in check by his steadfastness in telling this story through Armstrong’s eyes, and First Man is all the better for it, even if it isn’t a great film.