The gentle horror of Creep. 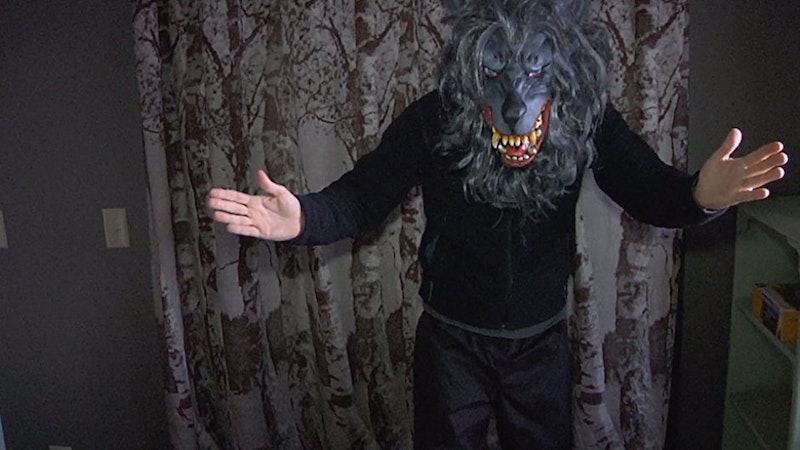 This is part of a series on Blumhouse horror films. The last entry on Viral is here.

Found footage films capitalize on the authenticity of their crappy production values; horror is more believable when it’s as out of focus, as unsteady, and as confusing as real life. At the same time, part of the fun of the genre is that it so insistently foregrounds its inauthenticity. The conceit that everything you see on screen is filmed by the characters in the film itself can't help but remind you that you're watching a film. It's real because it isn't real.

Director Patrick Brice's 2015 Blumhouse film Creep has one eye on the usual found footage scares, and the other on the arty meta-possibilities of the genre. The plot's a utilitarian conceit. Josef (Mark Duplass) pays videographer Aaron, played by director Patrick Brice, to come to his cabin and film him for a day. Josef claims he has brain cancer; he supposedly wants the video so his unborn child can have a record of him after he dies.

But it gradually becomes clear that Josef is lying. He plays disturbing mind games with Aaron. At one point he runs ahead of him in the forest and jumps out to scare him. At another he tells him a story about wearing a wolf mask in order to rape his own wife.

Horror fans know how this is supposed to end; Josef is going to murder Aaron at the cabin. And sure enough, Josef puts on wolf mask and runs at Aaron in what appears to be the climax. But then the movie goes on; Aaron goes back home, apparently unharmed. Until Josef sends him video CDs and sneaks around his house while he sleeps.

The extended coda feels superfluous, even in a movie that's only 77 minutes. It also pushes the suspension of disbelief past the breaking point. Once Josef is no longer paying Aaron to film him, there's no reason for Aaron to be recording everything. Are we supposed to believe Aaron sleeps with the camera by his bed so he can turn it on at a moment's notice to talk about his anxiety dreams? And why would he film the videos Josef sends him, pointing his own camera at the television screen. Perhaps, you might think, he's keeping a record for the authorities. But when he does call the police, they don't believe him, and he hangs up in frustration without ever mentioning that he has an extensive video record of his stalker.

Obviously, Aaron’s making a film; if he turns off the camera, the horror movie you're watching ends. The recording is for your benefit. Which is disturbing, because the movie is also for Josef's benefit.

By the film's end, we learn that Josef has hired other videographers before Aaron. He keeps all the tapes labeled in his home. Those tapes show him murdering each filmmaker in turn. Josef and you watch the movie to get to the bloodshed. You're collaborators in death. You're the one in the wolf mask; the creep is you.

If Creep implicates the viewer in the crime, though, it more interestingly implicates the viewer in innocence. The end of Aaron's film, and of ours, shows Josef musing that Aaron was special because he was basically a good person, and never believed that Josef would hurt him, no matter what Josef did. That's a good description of the dynamics of a horror film, where the director commits despicable acts for an hour or two, while the viewers all remain certain that no actual humans are being hurt, or will be hurt. The videographer, who’s also the director of Creep, asks you to love him not because his film is especially terrifying, but because he's unusually innocent. He knows you don't want anyone to get hurt.

The unrealistic conclusion of the film isn't an error, but is instead the point. There's one sequence in which Josef puts on the wolf mask and dances around goofily to convince his supposed unborn child not to be afraid. The film's in the film to let you know that nothing bad is going to happen. Nobody dies in horror movies.