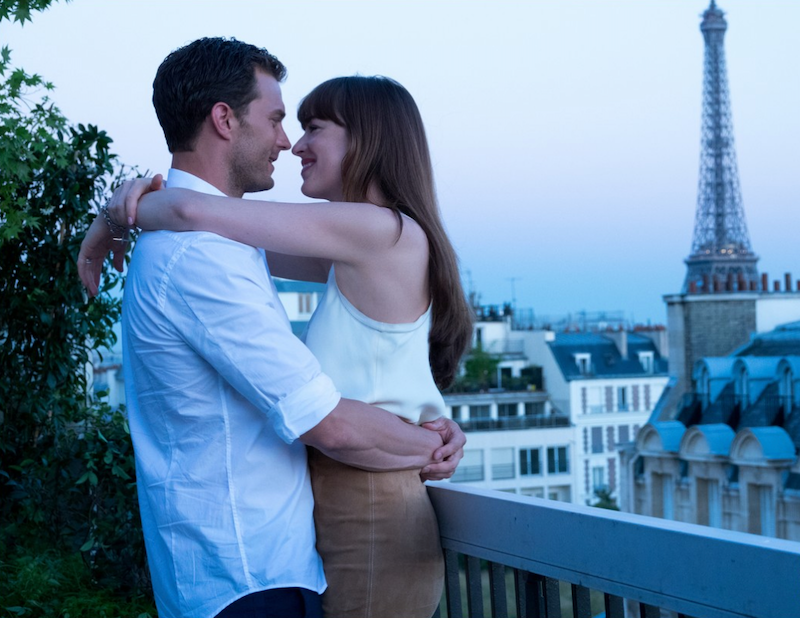 The Fifty Shades film series, of course, is based on E.L. James’ popular novels, which I haven’t read. But I’ve seen all three movies, and my view is that Dakota Johnson’s screen presence and nervous energy is just about their only saving grace, while her male co-star, Jamie Dornan, is like a black hole in human form, with something like anti-chemistry with his co-star. There’s a reason you never see Dornan in any movies besides these.

The first film, in 2015, somewhat overachieved, with director Sam Taylor-Johnson putting a skilled, arty sheen on the material, although Taylor-Johnson was jettisoned for the last year’s second film, which was directed by James Foley, with Niall Leonard (James’ husband) writing the script. Foley and Leonard are back for the third movie, and while it’s a slight improvement on the second, it’s still plagued by red herrings, small subplots that go nowhere, and thriller elements that are absolutely laughable.

As the new film begins, Christian and Anna are now married. They still have a lot of sex, both in and out of Christian’s infamous “red room,” but now they’re dealing with more serious matters: The question of whether to have children, plus returning bad guy Jack (Eric Johnson), who’s got revenge, and possibly worse, on his mind.

The sex is done well, which is what most people are there for anyway. But I can’t overstate how stupid the thriller subplot is. It’s just a collection of clichés from every kidnapping or corporate espionage thriller ever made, including multiple chase scenes with little purpose but to showcase Audi product placement, and a Chekhov’s Gun that’s literally a gun. As for the actual bad guy, the part is acted badly and written even worse.

The various subplots and side characters are unresolved, including various love affairs and a female architect who’s a dead ringer for Ivanka Trump.

Beyond that, the Grey character is all over the map. The plot requires an investment in Christian Grey’s maturity, growth, and coming to terms with his tragic backstory, but its treatment of all that is terrible. It also repeats the second movie’s mistake of repeated, glaring continuity errors involving Dornan’s facial hair—he’ll show up clean-shaven in the afternoon, with a full beard by dinnertime.

As for Dakota Johnson, she acquits herself fine. I’m really looking forward to the non-Fifty Shades portion of her career, and I’ve got a feeling she is, too.

Peter Rabbit Is Charming. A-

Peter Rabbit, adapted from Beatrix Potter’s children’s book series, is a beloved children’s character, and the release of the movie, at least based on its trailer, has angered a lot of fans of the character for departing from their established tone. They’ve got it wrong: this movie is highly enjoyable, and I laughed my head off.

Directed by Will Gluck, best known for the early Emma Stone film Easy A, Peter Rabbit features the mischievous titular rabbit (voiced by James Corden) leading a group of animals of various species (voiced by the likes of Margot Robbie, Daisy Ridley, and Elizabeth Debicki).

The animals had long fought with the old man (Sam Neill) who owns the house and land where they congregate, and after he dies, they think they have the run of the place. But then his nephew (Domhnall Gleeson) takes over the house, leading to a comical blood feud.

Peter Rabbit is structured like the third act of Home Alone, with Gleeson standing in for the burglars, and Peter Rabbit and his coterie of animated animals in the Macaulay Culkin role, and the two sides clashing largely with sophisticated booby traps. Meanwhile, Gleeson tries to romance animal-loving neighbor Rose Byrne while trying to conceal from her that he’s presently at war with a group of bunnies.

Domhnall Gleeson’s been in a lot of movies for several years now, shining in roles as different as General Hux in the recent Star Wars movies, Henry Beard in a A Futile and Stupid Gesture and his raucous, against-type turn as a CIA man in last year’s American Made. He’s incredibly good at this type of slapstick role, and it takes talent to pretend to fight with a bunch of rabbits who aren’t really there.

What really works here is the script, by Gluck and Rob Lieber, which is considerably wittier than I expected. There are a half-dozen sublime running jokes; the one with the rooster crowing in order to get over self-doubt was my favorite.

The film comes from Sony Pictures Animation, a studio without much of a track record of greatness, an also-ran associated mostly with The Smurfs, Hotel Transylvania, and Cloudy With a Chance of Meatballs franchises, as well as last year’s debacle The Emoji Movie. But even if it’s only half-animated, Peter Rabbit represents the studio’s best effort to date.